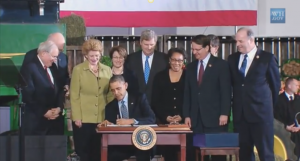 The Farm Bill is responsible for authorizing most of the agriculture programs in the United States. Working together with our legislative partners, the National Insulation Association (NIA) was able to include language in the bill that requires the Secretary of Agriculture to submit a report on energy use and energy efficiency projects at the Washington, D.C. headquarters and the major regional facilities of the Department of Agriculture. The report will include an analysis of energy use by the Department of Agriculture’s headquarters and major regional facilities, as well as a list of energy audits and energy efficiency projects conducted at these facilities. Lastly, the language requires the submittal of a list of energy-saving projects that could be achieved by enacting a consistent, timely, and proper mechanical insulation maintenance program, and upgrading mechanical insulation at these facilities.

This is a definitive victory for the mechanical insulation industry. This report will be a great step to show the American government and people throughout the country the impact that mechanical insulation can have not only on energy efficiency, but on cost savings throughout the governmental, commercial, and industrial sectors in the United States. It offers the opportunity to prove the tremendous benefits of insulation, with the potential to provide the hard evidence we need to bring the benefits of insulation to more and more audiences.

The NIA Foundation for Education, Training, and Industry Advancement, who worked alongside legislators to pass this legislation, promotes the benefits of insulation to outside audiences. NIA would like to thank Representative Tim Bishop (D-NY), Representative Chris Gibson (R-NY), and Representative Michael Grimm (R-NY) for their efforts in introducing our amendment and getting it adopted in the version first acted upon by the U.S. House of Representatives. Their commitment and support of mechanical insulation has been paramount to our recent efforts and we look forward to continuing to work with them and their colleagues to ensure that mechanical insulation continues to receive the attention it deserves.

(b) CONTENTS.
The report required by subsection (a) shall include the following:

1) An analysis of energy use by the Department of Agriculture headquarters and major regional facilities.

2) A list of energy audits that have been conducted at such facilities.

3) A list of energy efficiency projects that have been conducted at such facilities.