The
mechanical insulation industry, and the economy as a whole, continues to
rebound from the recent recession. The recovery is slow and varies by region,
market segment, and even within states. The good news is that the industry is
slowly recovering and the signs are there, although fragile, for continued
moderate growth. The industry is moving forward.

After
years of significant growth (2003–2008), the commercial and industrial
mechanical insulation market saw a decline in 2009 of over 27%. The 2010 survey
indicated that the industry had potentially bottomed out and was beginning to
recover. Like many other industries, we soon found that optimism was unfounded
and we had encountered a false bottom. 2011 yielded a 14.7% decline from 2010,
which—for all practical purposes—erased the gains of 2005–2008. Margin erosion
represented a significant portion of the 2011 decline. It does appear, however,
that the bottom has been reached, with 2012 showing 3.5% growth over 2011.

While the growth in 2012 is encouraging, it is
unfortunately beginning from a smaller base, and the general economic recovery
is still tenuous and subject to sudden change. Thus it is not a question of
whether the recovery has begun, but at what pace it will continue. For the
first time, the industry survey asked respondents to provide information
relative to growth expectations for 2013 and 2014. The respondents were
confident about the recovery and indicated they were expecting, on average, a
total of 7% and 8.9% growth, respectively.

The survey was sponsored by the National Insulation
Association (NIA) Foundation for Education, Training, and Industry Advancement
(Foundation). The goal of the survey is to obtain valuable data regarding
sales, market size, and growth for the U.S. commercial and industrial
mechanical insulation market. Since the first survey was completed in 1997, the
market has shown a net growth that equates to a 2.4% annual compounded growth
rate. While that compounded growth rate may not seem overly impressive, you
must consider that the recent recession drove an industry decrease of over 35%
from 2009 through 2011. Over the 16-year period in which the survey has been
conducted, the range of growth has varied from over 22% in 2005, to a decrease
of more than 27% in 2009. That is a severe variance in a relatively short
period of time.

While
survey results are always subject to individual interpretation, the following
takeaways have been generated through discussions held both before and after
the tabulation of survey data.

The
last several years have been difficult; although signs of recovery were evident
in 2012, it was a challenging year. All
segments—manufacturing, distribution/fabrication, and contracting—responded to
the challenges, as they have in the past (although it is much easier, and more
fun, to respond to the challenges of growth versus decline). Though the economy
has been problematic in the past few years, the future is looking much brighter,
with the potential for sustained growth.

We
should not undervalue the impact the industry’s educational and awareness
initiatives have had. Without those efforts, the bottom may have been deeper
and the recovery even slower. I would like to extend a sincere thank you to
NIA’s Associate (manufacturer) Members who participated in the survey, the
individuals who contributed to the informal survey supporting data, and to all
the contributors to the NIA Foundation for Education, Training, and Industry
Advancement. The Foundation and your support are making a difference in the
industry. 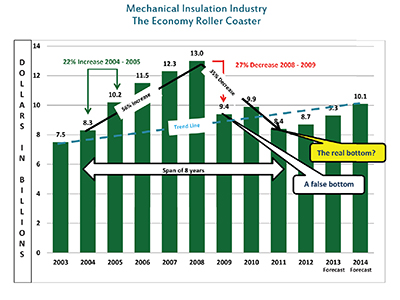 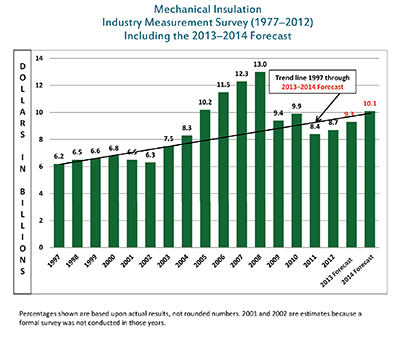