A Different Perspective: Benefits of Insulation in the Power-Generating Industry

A Look at Insulation Use in Steam-Generating Power Plants 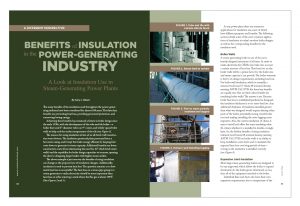 The many benefits of the insulation used throughout the power-generating industry have been considered for almost 100 years. The three key benefits are preventing heat loss, providing personnel protection, and conserving/saving energy.

Achieving these benefits has remained a fixture in boiler design since the early 1920s, with the development of the tube and tile boiler—a boiler that used 6”-diameter tubes on 9”-center, and widely spaced tube walls to help cool the surface temperature of the tile (see Figure 1). 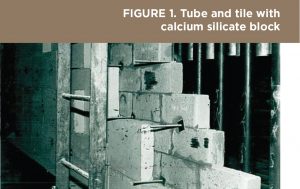 The reasons for using insulation in lieu of an all-brick wall construction were obvious. The insulation protected plant personnel from a hot outer casing, and it kept the boiler energy efficient by keeping fuel costs down to generate its steam capacity. Additional benefits are lower construction costs (from eliminating the need for 22”-thick brick outer walls) and the capability for boiler design capacities to increase, opening the door to designing larger boilers with higher steam outlets.

The above example is just one way the benefits of using insulation can change as the proposed use of insulation changes. Additionally, insulation is used to prevent heat loss. The question remains as to how much heat loss is acceptable? The heat loss on a steam pipe going to a steam generator to make electricity should be more important than
heat loss on a flue entering a stack where the flue gas is about 150°F. (See Figures 2 and 3.) 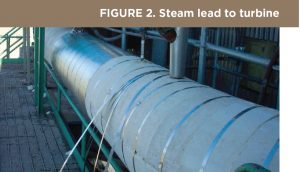 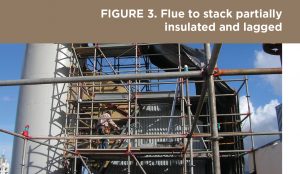 At any power plant there are numerous applications for insulation use, most of which have different purposes and benefits. The following sections detail some of the most common applications of insulation in today’s modern boiler designs, as well as the corresponding benefits for the insulation used.

A steam-generating boiler is one of the most heavily designed inventions of all time. In order to make electricity, the OEMs must take into account a certain amount of heat loss. That heat loss on the boiler walls will be a prime factor for the boiler size and steam capacity it can provide. The boiler warranty is tied to its design requirements, including heat loss. For boiler wall insulation, which is normally a mineral wool board 4”-thick, 8# nominal density, meeting ASTM C612 IVB, the three key benefits are equally met. But are there other benefits for insulating boiler walls? The answer is yes. Because boiler heat loss is established/predicted as designed, the insulation thickness is set to meet that loss. Any additional thickness of insulation installed greater than what was designed would require altering other parts of the boiler, potentially raising overall boiler cost and making installing the outer lagging more expensive. Also, the current insulation of choice is easy to install and offers the same insulating value (K‑value), whether it is installed in double or single layer. So, the hidden benefits of using insulation (mineral wool board, 8# nominal density, meeting ASTM C612 IVB) on boiler walls is its ability to keep installation costs down and to maintain the expected heat loss over long periods of time—as long as the insulation is installed correctly (see Figure 4). 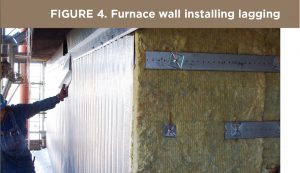 Most large steam-generating boilers are designed to be top supported, which allows the boiler to expand downward. As the boiler grows downward, so does all of the equipment attached to the boiler. 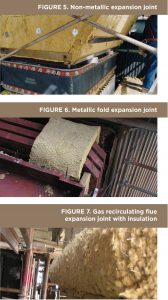 The insulation must be flexible enough not to tear when bending and must have a facing to keep it in a sandwich construction (due to the outer lagging not in direct contact with the insulation). Again, the insulation industry has provided an acceptable product (the 1,200°F mineral wool blanket ASTM C592 type II with chicken wire facing on both sides). When this insulation is used for insulating expansion joints, it provides the three key benefits of insulation (preventing heat loss, protecting plant personnel, and saving energy).

Almost all the large steam-generating boilers used for generating electricity have a steam drum. The steam drum’s purpose is to collect and store water and steam for distribution to the different water and steam systems of the boiler. A steam drum can be as large as 5 feet in diameter, and it has lots of connections coming off all sides and top, curved conical-shape heads, and a manway, making it extremely difficult to insulate. The material of choice for the insulation is a calcium silicate block material, ASTM C533. Mineral wool boards have been tried but do not hold up over long periods of time due to the heavy vibrations and normal binder burnout associated with the drum temperature, usually around 700°F. Of course, the insulation of choice also meets the three key insulation benefits. However, there is one more benefit: That insulation can be shaved or cut into obtuse shapes and sizes and will still retain its insulating characteristics. Insulating a drum head, for example, requires many cuts and shapes to insulate the curved, conical shape (Figures 8 and 9). 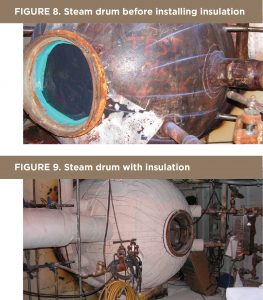 The scenarios described offer just three examples of the benefits achieved when using insulation at a steam-generating power plant. There are many other examples of systems and equipment that require insulation. From the flues and ducts to the air heaters and fans, insulation plays a key role in the design and operation of the boiler. The value of insulation goes beyond the three key benefits of preventing undesired heat loss, protecting plant personnel from hot surfaces, and keeping energy costs down (saving fuel). Over the years, it has become even more clear that the most valuable attribute of insulation is its diversity, which allows boiler design and operation to generate the steam required to meet our electric energy requirements.