“Going green” – accomplishing thermal and
energy efficiency – is the new buzzword, and much is being written about how the
steam-generating industry has to go green. However, the steam-generating
industry has been working on this for years with clean coal technology designs
and biomass- and refuse-firing boilers. And now that new fields that could
provide enough natural gas for more than 100 years have been found, it may be
time to resurrect the gas-fired boiler and start a whole new line of boiler
fleets.

The
standards proposed recently by the U.S. Environmental Protection Agency (EPA)
and the new stricter federal emissions rules will soon require, as early as
2012, tougher and more stringent rules on what exits from our nation?s
smokestacks. This puts more pressure on utility companies to install additional
air pollution equipment on their existing steam-generating boilers and look for
green, alternative ways of burning fuel.

Thankfully,
there are already boiler designs that can burn alternative fuels such as refuse
(trash), wood, and biomass. The technology also exists in the fluidized bed
design, an alternative method of burning solid fuels such as coal. While most
of the news about going green is about gas turbines, wind turbines, solar
panels, and nuclear energy, those energy options (with the exception of nuclear
energy) produce less than 10 percent in megawatts compared to the existing
alternative fuel boilers being designed today.

Alternative
fuel?burning boilers were developed as far back as 1972, in part because of the
growing disposal costs for landfills, the passage of the Public Utility
Regulatory Policies Act of 1978, and an increase in demand for electric power
in the United States. Each of these alternative fuel boilers has the basic
components of previously designed boilers, such as economizers, drums, and
super heater tubes. The boiler manufacturers only modified the fuel input
equipment or modified the basic boiler parts to accommodate the transfer of
additional air or ash, or the fuel itself.

Refuse and Biomass as Fuel

Boilers that burn refuse, wood, or biomass
(vine clippings, leaves, grasses, bamboo, and sugar cane or bagasse) have the
same basic design as utility radiant boilers and industrial boilers that burn
coal. However, these ?waste-to-energy? boilers have been modified to
accommodate the distinct characteristics of burning refuse.

The
type of refuse, wood, or biomass varies depending on time of year,
hemispherical location, and whether the boiler is in a residential or urban
area. The fuel itself will also vary in how much plastic, paper, cardboard,
leaves, grass, and wood it contains, perhaps also depending on the time of year
(e.g., autumn may bring more leaves).

There
are two basic methods of burning refuse: mass burning uses the refuse as
received, while prepared refuse or refuse-derived fuel (RDF) uses refuse that
has been separated and sorted, with the remaining non-recycled material going
to the boiler. There are more than 1,600 types of boilers in operation around
the world.

The
first RDF boiler went into operation in 1979 in Akron, Ohio. These boilers
require a very controlled feed of the fuel for good combustion and to maintain
a minimal amount of CO and NOx emissions. Among other specific
differences from a conventional coal-fired boiler, these boilers also require
very specific air input for proper combustion. For example, refuse usually
contains a large amount of volatiles (combustible material), requiring a large
amount of additional air to be inputted to the furnace area where the
combustion takes place. These boilers may add up to 30 percent additional air
to maintain proper combustion. These “waste-to-energy” boilers produce little
CO, NOx, or mercury but can expel a lot of fly ash from their
smokestacks if not properly controlled. They require precipitators and
baghouses to clean the spent gas of its fly ash.

Fluidized bed boilers are much more unique
in design. Though gasification has been around since the 1920s, its use as an
alternative fuel?burning method of generating electricity and power began in
the late 1970s. The fluidized bed boiler uses a process by which solid fuels
are suspended in an upward-flowing gas or air stream at the bottom of the unit.
The burning fuel exists in a fluid-like state that has a high heat transfer but
reduced emissions.

The fluidized bed boiler combustion process mixes fuel
(coal) with air. The coal is crushed to less than 1/8 in. (A typical
pulverized coal-fired boiler uses coal pulverized to ¼ in.) The fuel is then
fed into the lower furnace, where the bed is maintained at a temperature around
1,500°F. Air is introduced into the bed, and the flow of air and fuel is
controlled to keep the desired amount of heat. This type of clean coal-fired
boiler (bubbling or circulating) has almost 90 percent less SO2 and
NOx emissions than a conventional coal-fired boiler.

Finally, there is another alternative fuel
when considering going green: natural gas. The natural gas?fired boiler has
been around for more than 75 years and is a proven and efficient
steam-generating boiler. The design was basically tabled due to the high cost
of natural gas versus the cost of coal. However, recent discoveries of natural
gas in Ohio and Pennsylvania (shale-gas drilling) may encourage utility
companies to consider adding new steam-generating boilers to their existing
fleets. It has been reported that shale-gas drilling will add $118 billion to
economic growth in the next 4 years. This does not even take into account new
steam-generating boilers being added to existing power plants!

If
the amount of natural gas in these shale-drilling beds is accurate, the power
industry has an option that can produce the megawatts and steam capacities
needed to replace their existing coal-fired boilers with new environmentally
friendly boilers. This option may prove more cost-efficient than adding
expensive air pollution equipment to boilers that average over 50 years of age.
It has been reported that the power industry may spend in excess of $10 billion
in the next 4 years to meet the current federal emissions rules and standards
proposed by the EPA.

Understanding your options and knowing the
details of boiler designs and the fuels you intend to burn is just the
beginning of achieving an energy-efficient, green steam-generating boiler. It
is equally important to remember that every nook, cranny, exposed wall surface,
hot flue or duct, wind box, pipe, or exposed tube will have some sort of brick,
refractory, insulation, and lagging (bril) on it. Regardless of what type of
boiler (refuse, wood, biomass, fluidized bed, or natural gas?fired) you choose,
it can be energy and thermally efficient only with the proper designs and
installation of the bril materials.

The information in this article was
obtained primarily from public sources, without input from any boiler
manufacturer companies directly. 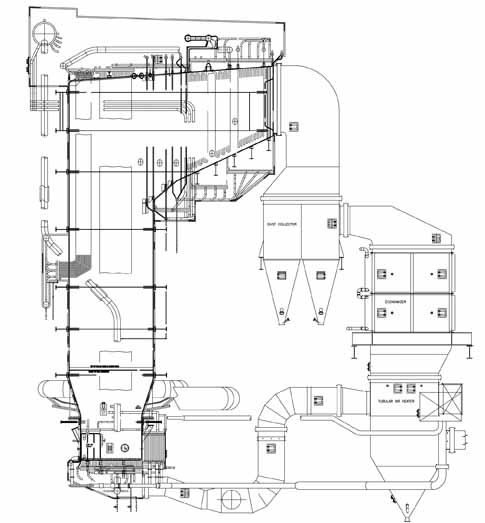