A Different Perspective: Insulating Piping System at a Power Plant 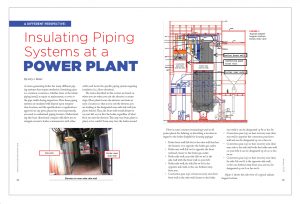 A steam-generating boiler has many different piping systems that require insulation. Insulating pipes is a common occurrence, whether done at the initial piping install, as repair or replacement, or even at the pipe welds during inspection. How these piping systems are insulated will depend upon temperature, location, and the specifications or applications approved at any given plant; but most importantly, you need to understand piping location. Understanding this basic directional compass will allow you to navigate around a boiler; communicate with other crafts; and locate the specific piping system requiring insulation (i.e., floor elevation). 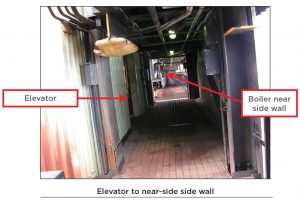 Here is some common terminology used at all power plants for defining or describing a location in regard to the boiler (helpful for locating piping):

Figure 1 shows the side view of a typical radiant hopper bottom. 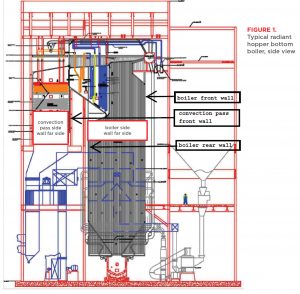 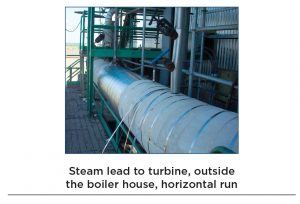 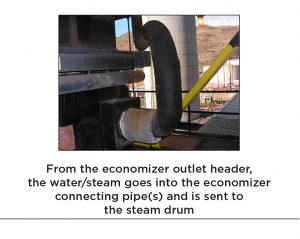 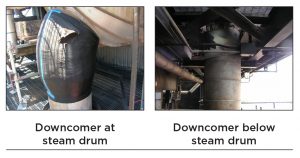 Small bore piping (drain, vent, and soot blower) is piping usually less than 4″ iron pipe size (IPS) with temperature based on source of steam or water. Drain lines from the economizer inlet can be 350°F, compared to drain lines coming from the lower water wall headers at 626°F. 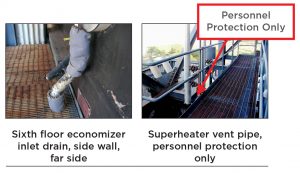 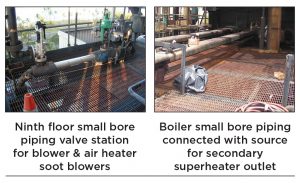 As is evident from the photos, each system presents its own unique situations. Here is a quick summary of the particular issues for each system: 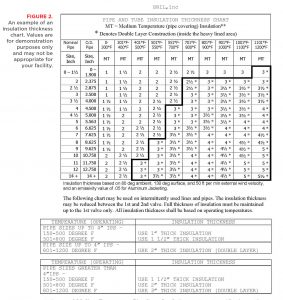 In addition to the insulation thickness requirement, the power plant or design engineer also may specify the application and material types to be used. While not the only options, the following are materials that the author has used for insulating and jacketing piping at a power plant:

The following are examples of good industry standard practices.

Wherever possible, jacketing seams should be located on the opposite of the most viewed side of the pipe. Jacketing seams should not be seen from a walking platform or grate, and placed along the horizontal edge and not on the pipe top. The seam should have a safety hem and kick out on edge for strength and watertight seal. 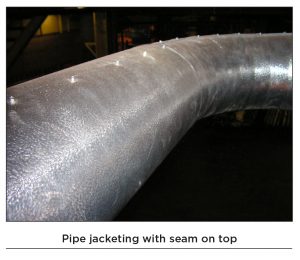 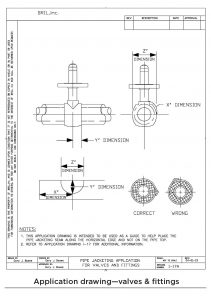 Pipe insulation for single-layer application does not have to be staggered. 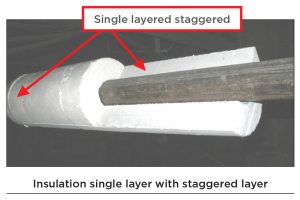 Pipe insulation for double-layer application must have the second layer staggered so the seams or joint do not align with the first layer. 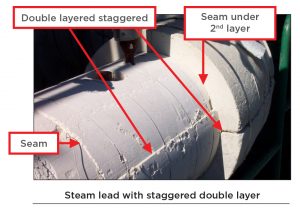 Pipe insulation should be wired in place and never glued in lieu of using wire. 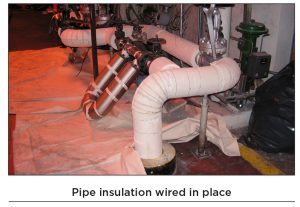 Banding of piping is an acceptable alternative to using lacing wire for holding the insulation but not as a jacking attachment in lieu of screws. 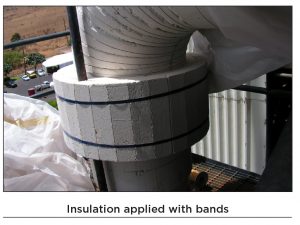 Vertical drops for piping greater than 12” OD must have an insulation support every 10 to 12 feet. 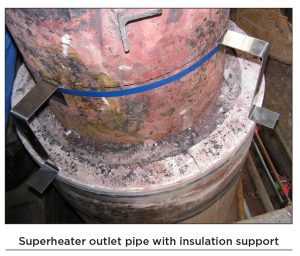 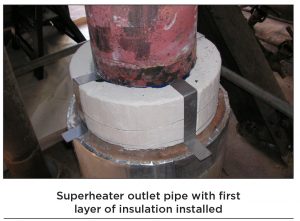 Elbows and bends present their own unique issues and require the most experienced insulator due to all the cutting and fitting. Pipe insulation should be butted tightly together, even on bends and elbows. Any open joints, cracks, holes, or voids greater than 1/16” must be filled in to the depth of the insulation with insulating cement made from the same or equal material as the surrounding insulation. This applies to single- or double-layer application. The reason it is not recommended to pack the void with loose insulation is because packing may not get all the way down to the pipe. In addition, the density of the packing may be less than the surrounding insulation, creating a potential hot spot. That is why the cuts and miters require the most experienced insulator in order to get the joints insulated as tight as possible. The more you fill in the joints with material, the more likely it is that you may lose heat (see photos). 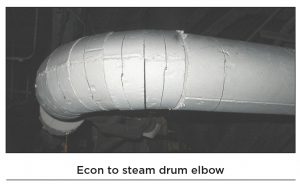 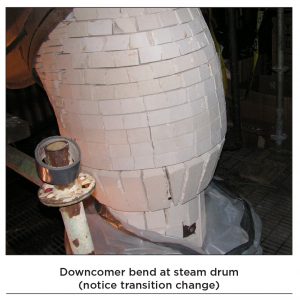 Piping will eventually be connected to a valve, and some can be quite large and challenging. 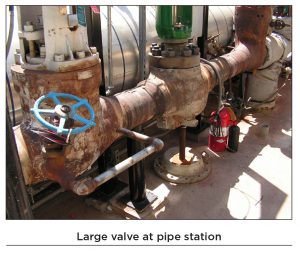 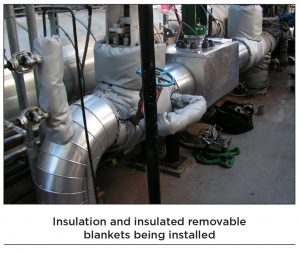 When properly insulated and jacketed, plant piping should be thermally efficient and aesthetically pleasing to the eye. It takes an understanding of what is acceptable and what is not to get the utmost value for the dollar. The pictures below show a hot steam line that has been completed. Can you see what is not in compliance?

Answers: (A) Insulation cuts on bend are not tightly fitted, and there are large gaps between cuts. (B) Insulation in joints is used instead of insulating cement. (C) Bottom below banded area has insufficient lacing wire. (D) Bands are used in lieu of screws on horizontal section of jacketing. (E) There is no kick out at horizontal jacketing seam. (F) Jacket seam is on the wrong side of pipe, visible from platform. (G) There is no caulking or flashing at support rods penetrating jacketing.

With so much plant and boiler piping requiring insulation and jacketing, it is imperative that power plants get well insulated and jacketed piping systems to keep the boiler and plant energy efficient. Paying attention to basic insulating and jacketing practices will help ensure that happens.

References
The information contained in this article has been primarily obtained from public sources, without input from any of the boiler manufacture companies directly.