A Different Perspective: Interesting Facts about Sound Control and Insulation in the Power-Generating Industry 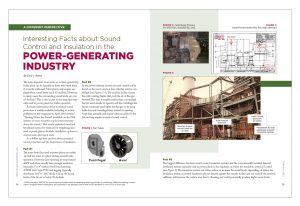 The noise exposure or acoustics at a steam-generating boiler plant can be harmful to those who work there if correctly addressed. Most plants only require earplugs when sound levels reach 85 decibels. However, in many cases, the surrounding sound levels are over 85 decibels.* This is due in part to the large fans typically used at power plants for boiler operation.

*OSHA standard 1910.95 for noise exposure states that the employer shall administer a continuing, effective hearing-conservation program when employees are exposed to an average sound level of 85 decibels or more in an 8-hour day.

Accurate information about acoustical sound protection is readily available, including an article published in this magazine in April 2003 entitled “Turning Down the Sound” (available on the NIA website at www.insulation.org/io/articles/turning-down-the-sound/). That article explained tonal and broadband noise, free-field and A-weighting, fans used at power plants, decibels, installation options to control noise, and much more.

As a follow up, here are facts about acoustical sound protection and the importance of insulation.

The noise from fans used at power plants can make up half the noise at a plant during normal boiler operation. However, fans operating at temperatures 400°F and above usually have enough insulation (typically 3” to 4” mineral wool board meeting ASTM C612 type IVB) and lagging (typically aluminum .032” to .040” thick) to keep the sound levels of the fan at or below 85 decibels.

In the power industry, acoustical sound control can be found on the most common fans, whether axial or centrifugal (see Figures 1–3). The axial fan is like a house fan, with rotating blades that push the air or flue gas forward. This type is usually smaller than a centrifugal fan but much louder to operate, and the centrifugal fan (more commonly used) spins the flue gas or air using deflection and centrifugal force toward its opening. Axial fans normally will require silencers added to the fan and may require acoustical sound control. 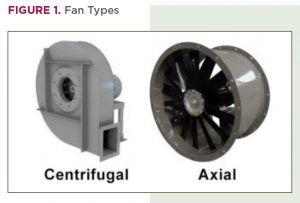 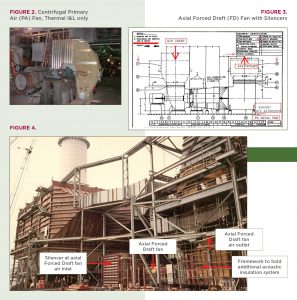 When determining the daily noise exposure in an 8-hour day at a 3-foot distance from a fan, you must measure the combined noise around the fan, rather than the individual noise level of each noise source.

All OEM boiler design specifications include requirements for sound control (which some call “insertion loss requirement”) for the fans operating the boiler. (Note: Sound control requirements can vary from plant to plant and, in most cases, boiler to boiler.) Figure 5 provides an example.

Fan manufactures, when asked about their fans, will provide their standard charts showing expected decibel sound control levels at different hertz requirements with their bid or quote (see Figure 6.)

In the specification example in Figure 6, the logical choice of acoustic insulation would be to use 6”-thick insulation plus a rubber lining with the outer lagging (aluminum was the material chosen). The fan casing will be insulated externally, leaving an air space between the casing and the insulation system. Therefore, using a mineral wool board 8#/cf nominal density with .032 stucco embossed aluminum rib and flat lagging would be a favorable solution to sound control.

Fans come in all sizes and should be estimated per the detail or arrangement drawings. There is a significant square foot area difference between fans used in a large utility radiant boiler versus a small, industrial-type boiler.

The cost for sound protection will vary.

There is a lot to know about acoustical sound control for the steam-generating boiler, especially for the fans required for normal boiler operation. Sound control for the noise found at a power plant is a must to protect those working there. Whether calculating the square foot area or deciding on what sound control system to use, acoustics must be addressed at every power plant, regardless of the size of the steam-generating boiler. Practicing proper sound control will improve acoustics and create a safer work environment, too.