Josh Rasch is an Acoustical and Systems Consultant at McClure Engineering, a mechanical and electrical consulting engineering firm dedicated to the development of innovative solutions to unique engineering problems. 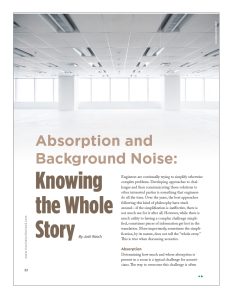 Engineers are continually trying to simplify otherwise complex problems. Developing approaches to challenges and then communicating those solutions to other interested parties is something that engineers do all the time. Over the years, the best approaches following this kind of philosophy have stuck around—if the simplification is ineffective, there is not much use for it after all. However, while there is much utility to having a complex challenge simplified, sometimes pieces of information get lost in the translation. More importantly, sometimes the simplification, by its nature, does not tell the “whole story.” This is true when discussing acoustics.

Determining how much and where absorption is present in a room is a typical challenge for acousticians. The way to overcome this challenge is often through material selection. If done properly, the material selection should create an acoustic environment appropriate for the application. This is all measured through a primary descriptor used to quantify the way the acoustic environment behaves, called reverberation time (RT). In early phases of project design, the volume of the space is used to determine roughly how much absorption will be needed to adjust the space for the application. While this overall figure is helpful for early budget estimates and discussions on ceiling height, it does not shed light on individual octave band RT. In later design, we look at octave band absorption coefficients, also known as alpha coefficients, from material lab tests to dial in the room for a balanced RT curve across all frequencies.

As the industry has been able to quantify the acoustical absorption performance down to a single number, the noise reduction coefficient (NRC), it is important not to lose sight that there is still nuance involved. Unless you consult with an experienced acoustician, improper or inefficient decisions can result.

When absorption is discussed during the design of a space, the NRC is going to be front and center. The absorption requirement in the space ultimately will influence the products incorporated to achieve the acoustical goals. However, as mentioned above, this number is not the end-all/be-all for acoustical design. It is important to note that the NRC only accounts for four octave bands. Specifically, these octave bands are 250, 500, 1k, and 2k Hz. As most speech falls into these frequencies, specifying materials based on an NRC is practical. When one is trying to determine the acoustical performance of an office, conference room, lobby, etc., the NRC will need to be added to the equation. The different materials that make up these spaces (ceiling tiles, wall panels, flooring) all typically come from various manufacturers. The universal identifier they will all use, however, is the NRC. In cases where the focus is speech (exception of choral) and there is no audio source with intent to produce full range program audio, NRC can be enough to determine how much absorption is needed. What is most important, however, is to engage a local acoustical consultant when the application goes outside of this or the space is high volume.

To illustrate the explanation above, say that a manufacturer offers wall panels, and these wall panels come in a variety of different thicknesses. Each thickness will have a different NRC rating; but remember, this NRC rating is an average of the alpha coefficients at 250, 500, 1k, and 2k Hz. Simply seeing what the NRC requirement is for a space and selecting a material that has that NRC rating may not be optimal. If we have a better idea of what the target frequency range is for the space, a more accurate set of alpha coefficients can be selected. This selection can be understood by identifying a few factors: How is the space going to be used, and what is its total volume? An NRC can be similar for two products, but at a specific frequency, the alpha coefficient can be drastically different. If the space’s intended use dictates that a specific frequency is critical, just looking at and making decisions based on the NRC can be a mistake.

On a more macro level, it is important to distribute the proper resources to each space, depending on that room’s importance and the budget allocated. For example, if a space has four offices, a band room, and a lobby, these do not typically all need to be treated equally. Certainly, coefficients can be determined for each, but do we really need to put as much time, energy, and money into the acoustical performance of the lobby as we do with the band room? In most cases, no. However, lobbies can vary greatly in both volume and use case. Greater volume and higher RT may add a “presence” that is desirable if not limited by an application. In some cases, the lobby doubles as a presentation or event space—and that adds relevance to discussing the acoustics in more detail.

Now, shift focus over to the band room. In a band room, with a larger volume and higher ranges of frequencies at play, these factors can very easily fall out of balance and thus destroy the usefulness of the space itself. In a band room designed using NRC, lower frequency instruments such as the tuba, bassoon, and baritone saxophone may be overbearing, due to an over-extended low-frequency RT. This goes to show how a wide range of frequencies can require special attention when optimizing a space’s acoustical performance, and how only making decisions based on the specified NRC is insufficient. Additionally, and outside the scope of this article, band rooms require further consideration of reflection, diffusion, and isolation.

The measurement most often used when designing around the concept of background noise is decibels weighted to human ears (dBA), which is very often used for outdoor measurement. When talking about dBA levels indoors, one is typically discussing HVAC noise. This means that HVAC manufacturers will additionally implement the use of noise criteria (NC) as a rating standard to capture how loud their products are. After all, when the HVAC is turned off, it is fairly quiet in most any indoor setting. NC has become the most prevailing quantitative value when determining how loud a room is. However, NC does have some shortcomings—specifically, that it is a tangency rating. This is illustrated in Figure 1 (numbered Figure 5 in the ASHRAE Manual). 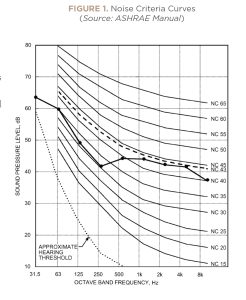 As is clear from Figure 1, the different NC ratings have balanced curves as they move through the various frequencies. However, when a set of specific measurements of noise are taken through different octave band frequencies, they do not follow said curve. At higher frequencies, the measurements are as high as the NC 43 curve, while at lower frequencies, they fall well below. The tangency rating given to this particular set of measurements would be an NC 43, even though half the data points would be classified as under NC 35. So, the tangency rating is not exactly giving an accurate picture of how loud this room truly is. Essentially, the rest of the curve does not give credit for how quiet the room is at the lower frequencies.

Why does this matter so much?

A table that is often referenced can be found in the ASHRAE Handbook – HVAC Applications, Chapter 49, Table 1, titled “Design Guidelines for HVAC-Related Background Sound in Rooms.” This table is a great tool to determine the optimal NC and dBA for a given type of space. However, the table assumes that the measurements are following along the curve of the NC. When a measurement is taken such as that in Figure 1 (ASHRAE Figure 5), because it is so unbalanced, it would lead the untrained eye to believe the room will be louder than it is.

This understanding comes into play when an acoustician is troubleshooting any sound issues with the HVAC in the space. Lower sound pressure levels on one end of the frequency spectrum may be solved with one remedy, while higher sound pressure levels on the other end will require a completely different solution. A common example of lower sound frequency challenge is often air handling unit (AHU) fan based. This could be solved by selecting a quieter fan during the design phase; or, if the AHU is an existing condition, by introducing a plenum sized to dimensions related to the problem frequencies. On the other end, higher frequency problems may be related to an improperly sized diffuser. Selecting a diffuser that delivers airflow at a lower velocity often corrects this.

In 2010, the ASHRAE Noise and Vibration Control NC table moved from offering a range to a single number with a +/- 5 dB design target note. This note is important as it highlights that the NC design guideline is not a maximum. Just as a space can be too noisy, it can also be too quiet. For example, if one is looking to design the acoustics for an open office space, with cubicles occupied by staff typing away on keyboards, not enough background noise can be a problem. In situations like this, the goal is to incorporate a sufficient level of background noise to make for a more pleasant atmosphere, and adding noise is always an easier task than taking it away—noise-masking systems are a relatively inexpensive solution. With this in mind, the NC rating should be treated as a target as opposed to a maximum allowable level.

Both NRCs and NC ratings are valuable, universal figures that can simplify the conversations between engineers and architects and allow them to make semi-guided decisions when purchasing materials from manufacturers. However, both do not tell the whole story about what is happening and what is required acoustically in a space. It is always a good practice to work with a qualified acoustician to meet the performance criteria set forth.