The projections in the Energy Information Administration’s (EIA’s) Annual Energy Outlook 2011 (AEO2011) focus on factors that shape the U.S. energy system over the long term. Under the assumption that current laws and regulations remain unchanged throughout the projections, the AEO2011 Reference case provides the basis for examination and discussion of energy production, consumption, technology, and market trends and the direction they may take. It also serves as a starting point for analysis of potential changes in energy policies. AEO2011 also includes 57 sensitivity cases, which explore important areas of uncertainty for markets, technologies, and policies in the U.S. energy economy.

AEO2011 also includes in-depth discussions on topics of special interest that may affect the energy outlook. They include: impacts of the continuing renewal and updating of federal and state laws and regulations; discussion of world oil supply and price trends shaped by changes in demand from countries outside the Organization for Economic Cooperation and Development or in supply available from the Organization of the Petroleum Exporting Countries; an examination of the potential impacts of proposed revisions to Corporate Average Fuel Economy standards for light-duty vehicles and proposed new standards for heavy-duty vehicles; the impact of a series of updates to appliance standards alone or in combination with revised building codes; the potential impact on natural gas and crude oil production of an expanded offshore resource base; prospects for shale gas; the impact of cost uncertainty on construction of new electric power plants; the economics of carbon capture and storage; and the possible impact of regulations on the electric power sector under consideration by the U.S. Environmental Protection Agency (EPA). Some of the highlights from those discussions are mentioned in this article. Readers interested in more detailed analyses should refer to the full report at www.eia.gov/forecasts/aeo/.

Real gross domestic product grows by 2.7 percent per year from 2009 to 2035 in the AEO2011 Reference case, and oil prices grow to about $125 per barrel (2009 dollars) in 2035. In this environment, net imports of energy meet a major, but declining, share of total U.S. energy demand in the Reference case. The need for energy imports is offset by the increased use of biofuels (much of which are produced domestically), demand reductions resulting from the adoption of new vehicle fuel economy standards, and rising energy prices. Rising fuel prices also spur domestic energy production across all fuels—particularly, natural gas from plentiful shale gas resources—and temper the growth of energy imports. The net import share of total U.S. energy consumption in 2035 is 17 percent, compared with 24 percent in 2009. (The share was 29 percent in 2007, but it dropped considerably during the 2008–2009 recession.)

Much of the projected decline in the net import share of energy supply is accounted for by liquids. Although U.S. consumption of liquid fuels continues to grow through 2035 in the Reference case, reliance on petroleum imports as a share of total liquids consumption decreases. Total U.S. consumption of liquid fuels, including both fossil fuels and biofuels, rises from about 18.8 million barrels per day in 2009 to 21.9 million barrels per day in 2035 in the Reference case. The import share, which reached 60 percent in 2005 and 2006 before falling to 51 percent in 2009, falls to 42 percent in 2035 (Figure 1).

Shale gas production in the United States grew at an average annual rate of 17 percent between 2000 and 2006. Early success in shale gas production was achieved primarily in the Barnett Shale in Texas. By 2006, the success in the Barnett shale, coupled with high natural gas prices and technological improvements, turned the industry focus to other shale plays. The combination of horizontal drilling and hydraulic fracturing technologies has made it possible to produce shale gas economically, leading to an average annual growth rate of 48 percent over the 2006–2010 period.

Assuming no additional constraints on CO2 emissions, coal remains the largest source of electricity generation in the AEO2011 Reference case because of continued reliance on existing coal-fired plants. EIA projects few new central-station coal-fired power plants, however, beyond those already under construction or supported by clean coal incentives. Generation from coal increases by 25 percent from 2009 to 2035, largely as a result of increased use of existing capacity; however, its share of the total generation mix falls from 45 percent to 43 percent as a result of more rapid increases in generation from natural gas and renewables over the same period. The role of natural gas grows due to low natural gas prices and relatively low capital construction costs that make it more attractive than coal. The share of generation from natural gas increases from 23 percent in 2009 to 25 percent in 2035.

The EPA is expected to enact several key regulations in the coming decade that will have an impact on the U.S. power sector, particularly the fleet of coal-fired power plants. Because the rules have not yet been finalized, their impacts cannot be fully analyzed, and they are not included in the Reference case. However, AEO2011 includes alternative cases that examine the sensitivity of power generation markets to various assumed requirements for environmental retrofits.

The range of coal plant retirements varies considerably across the cases (Figure 4), with a low of 9 gigawatts (3 percent of the coal fleet) in the Reference case and a high of 73 gigawatts (over 20 percent of the coal fleet). The higher end of this range is driven by the somewhat extreme assumptions that all plants must have scrubbers to remove sulfur dioxide and selective catalytic reduction to remove nitrogen oxides, that natural gas wellhead prices remain at or below about $5 through 2035, and that environmental retrofit decisions are based on an assumption that retrofits occur only if plant owners can recover their costs within 5 years. The latter quick cost recovery assumption is meant to represent the possibility of future environmental regulation, including for GHGs.

In all these cases, coal continues to account for the largest share of electricity generation through 2035. Many of the coal plants projected to be retired in these cases had relatively low utilization factors and high heat rates historically, and their contribution to overall coal-fired generation was relatively modest.

After falling by 3 percent in 2008 and 7 percent in 2009, largely as a result of the economic downturn, energy-related CO2 emissions grow slowly in the AEO2011 Reference case due to modest economic growth, growing use of renewable technologies and fuels, efficiency improvements, slower growth in electricity demand (in part because of the recent recession), and more use of natural gas. In the Reference case, which assumes no explicit regulations to limit GHG emissions beyond vehicle GHG standards, energy-related CO2 emissions do not return to 2005 levels (5,996 million metric tons) until 2027, growing by an average of 0.6 percent per year from 2009 to 2027, or a total of 10.6 percent. CO2 emissions then rise by an additional 5 percent from 2027 to 2035, to 6,311 million metric tons (Figure 5). 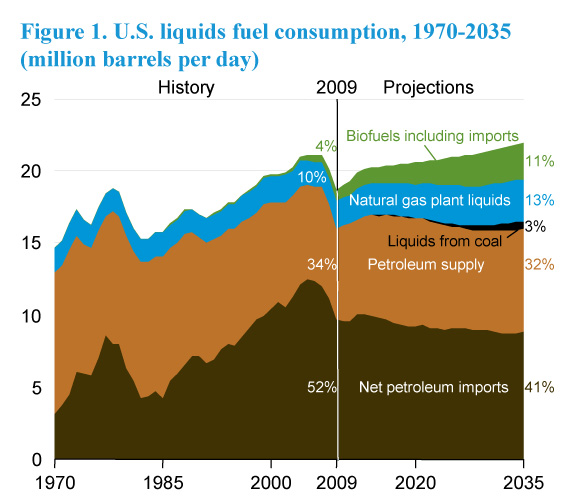 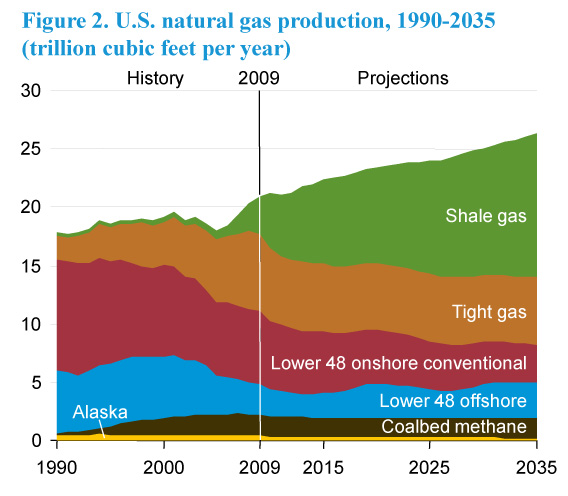 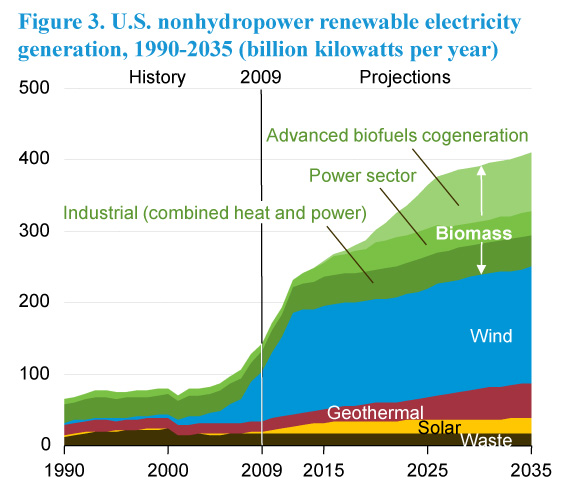 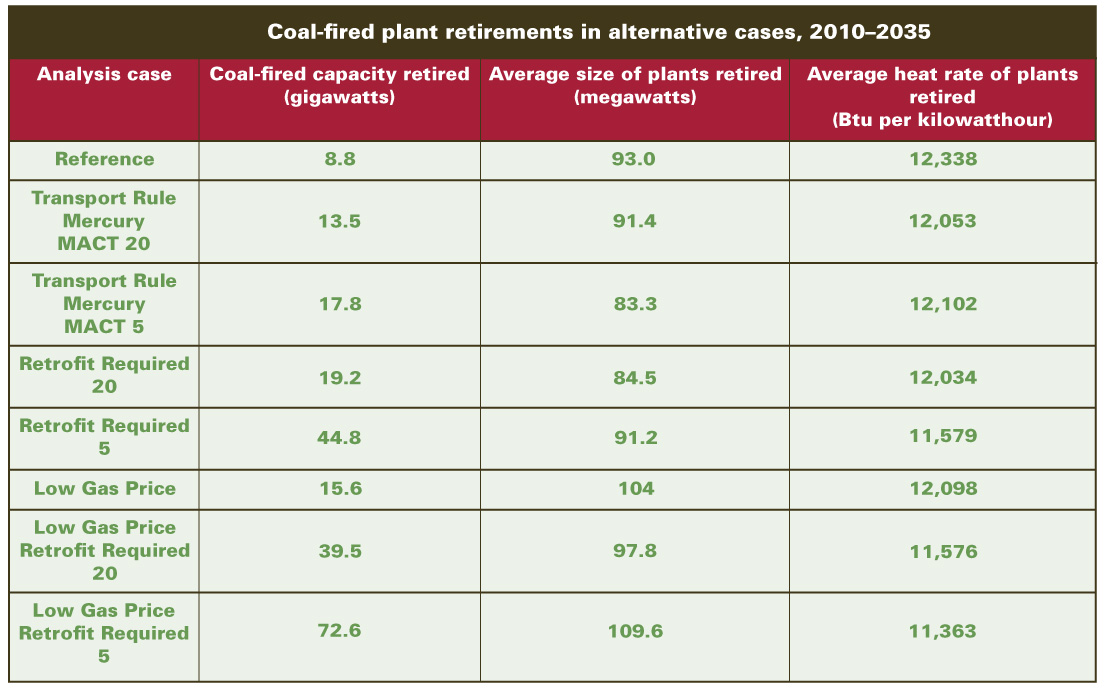 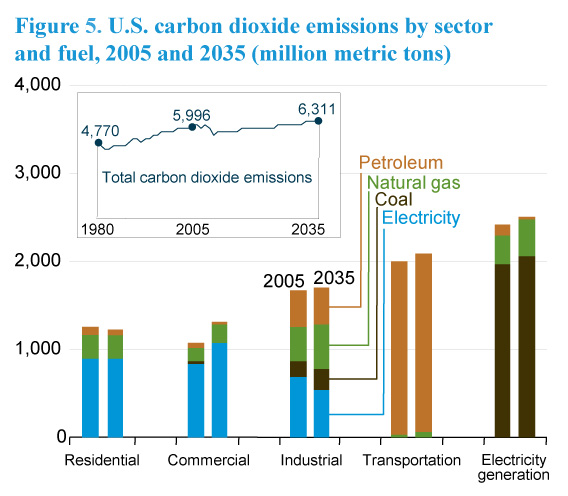