American Society of Heating, Refrigerating, and Air Conditioning Engineers (ASHRAE) Standard 90.1: Energy Standard for Buildings Except Low-Rise Residential Buildings and the International Energy Conservation Code (IECC) are the major energy design standards for new buildings in the United States. Most states or local jurisdictions have adopted some version of either Standard 90.1 or the IECC as their minimum design standard for all new commercial and high-rise residential buildings. The pattern has been for ASHRAE to update Standard 90.1 every few years and, more recently, to update it every three years. Therefore, its revision is of particular interest to those working with building energy efficiency technologies, including mechanical insulation.

Many of the products and services of NIA member companies are used in insulating pipes and ducts in commercial and high-rise residential buildings. The energy efficiency of these buildings depends partly on limiting heat flow to or from pipes, ducts, and equipment, whether they operate above or below ambient temperature. When used for below-ambient service, the insulation systems help prevent moisture condensation on those pipes and ducts, further saving energy.

Overall, Standard 90.1-2010 will result in buildings designed to use 30 percent less energy than those designed in compliance with Standard 90.1-2007. How does this revised energy standard require building designers and mechanical system designers to reduce a building’s energy use by 30 percent? There many ways of accomplishing this, including:

Technologies exist for designing buildings that use 30 percent less energy. In most cases, however, achieving this requires greater coordination between a building’s architect and mechanical system designer than typically occurs.

For above-ambient service, the pipe insulation thicknesses in Figure 1 are significantly greater than those normally installed (as they have been in previous versions of Standard 90.1, but to a greater degree in the 2010 version). For many of the steam heating distribution pipes in buildings, with an operating temperature greater than 350°F, 5 in. of insulation (such as mineral wool, fiberglass, or calcium silicate) will be required on all pipes except those with a size less than 1 in. NPS. This will probably require double layering and hence greater labor to install. Mechanical designers will need to allow a pipe clearance greater than 10 in., which is often neglected. Even hot water pipes used for hydronic heating will require 2 in. of insulation on all pipe sizes equal to or greater than 1-1/2 in. NPS.

For below-ambient service, by contrast, the new pipe insulation thicknesses are not particularly noteworthy. For example, 1 in. is sufficient thickness for all sizes on chilled water lines (with an assumed operating temperature in the 40°F to 60°F range). This is because these thicknesses were determined for energy conservation, not for condensation control, which often requires thicknesses greater than 1 in., particularly on pipes running through unconditioned spaces.

It is difficult to imagine 5-in.-thick removable/reusable insulation blankets installed on valves, pressure regulators, strainers, and other difficult-to-insulate fittings. A major challenge for the mechanical insulation industry is that these components are frequently left either uninsulated or partially insulated in steam and hot water heat distribution systems.

When ASHRAE Standard 90.1-2010 takes effect later this year, compliance will require greater pipe insulation thicknesses. On steam distribution pipes in buildings, those thicknesses will increase from 4 in. to 5 in. on most pipe sizes when using materials such as mineral wool, fiberglass, and calcium silicate. Lower-temperature, above-ambient pipes likewise will require greater thicknesses than those required in the previous Standard 90.1-2007. On below-ambient pipes, minimum insulation thicknesses will be only 1 in. for most insulation materials.

New buildings designed and constructed in compliance with Standard 90.1-2010 will be designed to use 30 percent less energy than those in compliance with Standard 90.1-2007. These new minimum design requirements, when followed, will result in significant energy savings in new buildings. However, it will take time for the states to adopt this revised standard. 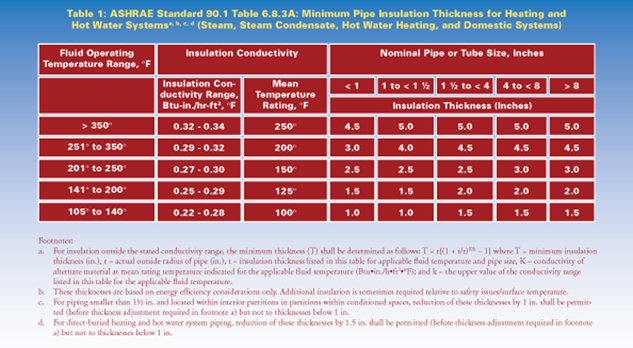 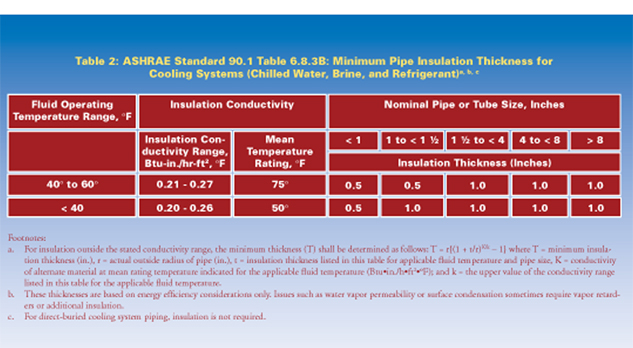