Despite Many Challenges, Recovery Remains Rapid

Anirban Basu is Chairman and CEO of Sage Policy Group, Inc., an economic and policy consulting firm in Baltimore, Maryland. He serves as the Chief Economist to Associated Builders and Contractors and as Chief Economic Adviser to the Construction Financial Management Association. In 2007 and then again in 2016, Mr. Basu was selected by the Daily Record newspaper as one of Maryland’s 50 most influential people. The Baltimore Business Journal named him one of the region’s 20 most powerful business leaders in 2010. 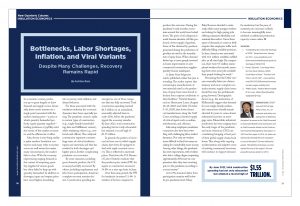 In economics courses, professors go to great lengths to draw demand and supply curves. Invariably, these curves intersect at a single point associated with the market clearing price—a price at which quantity demanded perfectly equals quantity supplied— leading professors to joyfully extol the virtues of free market economics and the efficiencies it offers.

Alas, theory is one thing, reality is quite another. Insulation contractors and many other economic actors are well aware that under many circumstances, the market fails to clear. With the economy experiencing surging demand in the context of reopening, quantity supplied of various goods has often failed to keep up with quantity demanded. In addition to shortages, input and output prices have raced higher, translating into economy-wide inflation and altered behavior.

For those associated with the insulation industry, the economic dynamics have been especially jarring. The pandemic caused a spike in certain types of construction (e.g., single-family homebuilding, data and fulfillment centers), while waylaying others (e.g., new hotels and offices). The catalyzed construction segments consume large sums of critical insulation inputs and materials, and that has resulted in both shortages and higher prices, further complicating pandemic-era economics.

In general, the pattern of recovery has been one in which supply chains have been ill-equipped to deal with rapid economic recovery. This is reflected in materials prices. Data from the U.S. Bureau of Labor Statistics indicate that the producer price index (PPI) for inputs to construction increased 24.8% on a year-ago basis in June.

Over that same period, the PPI for insulation increased 11.4%. A number of factors conspired to produce this outcome. During the pandemic’s early months, economies around the world were locked down. The price of oil collapsed, as roads became desolate. All this produced a lower supply of gasoline. Some of the chemical by‑products generated during the production of gasoline are used in the manufacture of spray foam. When demand kicked up, as more people invested in home improvement or new commercial construction, supplies quickly became inadequate.

A Spray Foam Magazine article published earlier this year is revealing. The author reports that several major manufacturers of raw materials used in the production of spray foam were forced to declare force majeure conditions at their facilities.1 Natural disasters such as Hurricanes Laura (August 20–29, 2020) and Delta (October 5–10, 2020) shut down chemical manufacturers along the Gulf Coast, resulting in limited supply of critical inputs such as aniline, nitrobenzene, and chlorine.

Like many employers, insulation contractors also have been wrestling with challenging labor market dynamics. Not only are workers more difficult to find, but many are asking for considerably more money. Among other things, the pandemic has reset expectations, with workers who lack a college degree requesting approximately 26% more in compensation than they were receiving prior to the pandemic, according to a recent survey.2

At 61.7%, America’s labor force participation remains well below its pre-pandemic level. Many Baby Boomers decided to retire early, while many younger workers are looking for high-paying jobs offering maximum flexibility and minimal discomfort. Given these types of demands, it comes as little surprise that employers suffer such difficulty filling available positions. In June, America was associated with 10.1 million available, unfilled jobs, an all-time high. By comparison, there were 9.5 million unemployed workers that month, meaning there were more jobs available than people looking for work.3

Presuming that the Delta variant eventually fades into distant memory and more complete normalcy returns, supply chain issues should become less problematic going forward. Demographic factors (e.g., the maturation of Millennials) suggest that demand for new single-family residential construction should remain elevated for years to come, absent substantial increases in mortgage rates. Meanwhile, industrial production has been surging since the early stages of the pandemic, and more American CEOs are considering bringing at least part of their global supply chains back home. This, along with ongoing modernization and adaptive reuse of existing commercial structures, will continue to support demand for insulation; but the pace of material price increases is likely to become meaningfully more subdued as additional production capacity comes online.