Sonal Patel is POWER magazine’s senior writer. A national, award-winning energy journalist, she covers a wide range of technology, business, and policy issues affecting the power industry worldwide. She can be reached at spatel@powermag.com.

Existing fossil-fuel-fired U.S. power plants must comply with state-specific goals to lower carbon pollution by 2030 under rules proposed by the Environmental Protection Agency (EPA) on
June 2, 2014. The so-called “Clean Power Plan,” which applies to existing power plants, seeks to cut carbon emissions from the power sector by 30% from 2005 levels by 2030 (see Figure 1
below).

It essentially consists of 2 main parts: state goals that must be achieved within a 10- to 15-year window after the plan is final, and guidelines to help states develop plans by June
2016 (with a 1-year extension option) to meet those goals. The EPA said the proposal, which gives states the option to work individually or in regional groups, “ensures that states have
the flexibility to choose the best set of cost-effective reductions for them.” (See Figure 3 on page 32 for proposed carbon reduction rates). 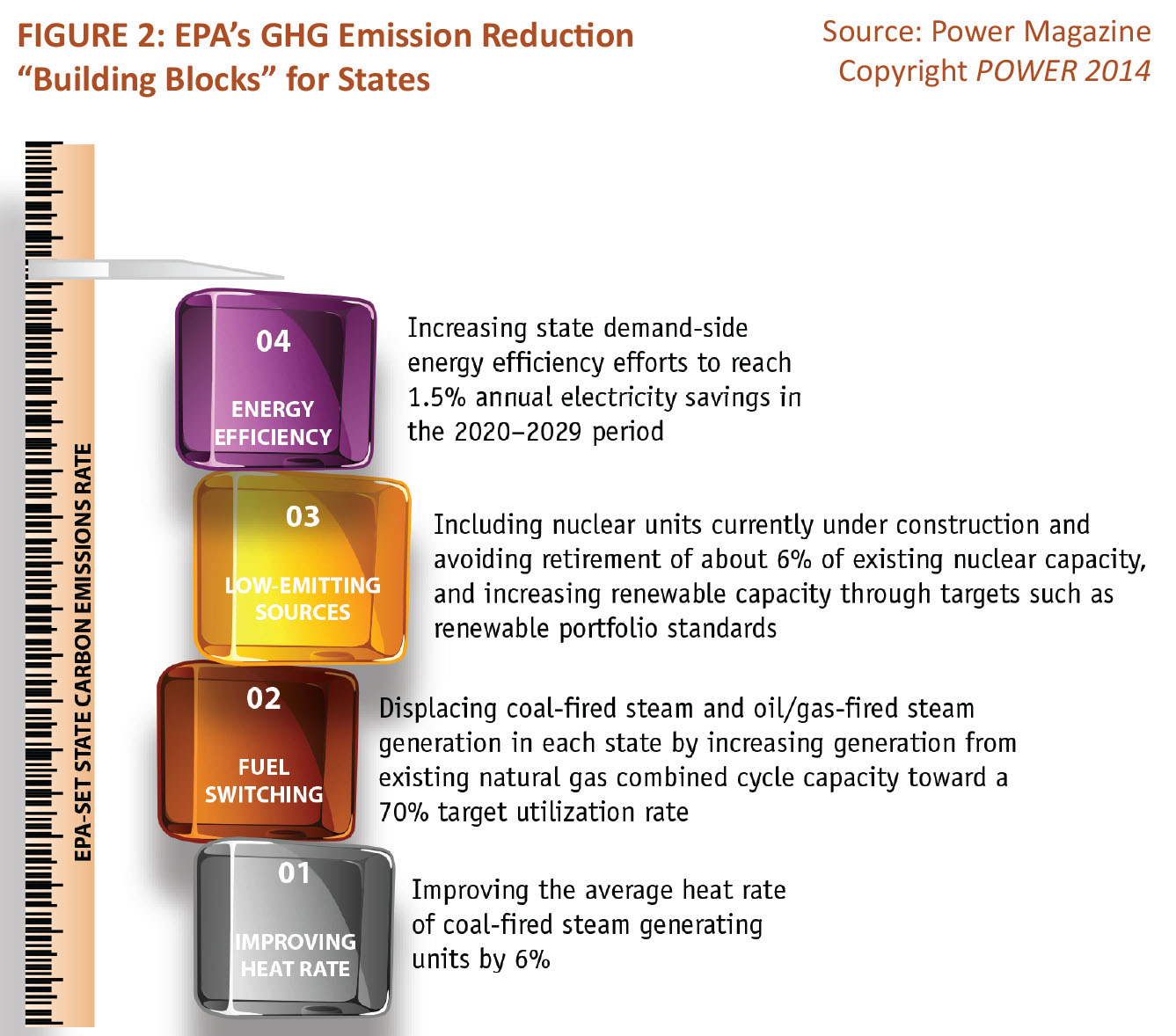 The EPA is proposing the state goal approach under Section 111(d) of the Clean Air Act (CCA), which requires that the EPA identify the “best system of emission reduction (BSER). . .
adequately demonstrated” that is available to limit pollution. It identified 4 “building blocks” that it says are in use by many states and utilities to make up the best system to curb
carbon pollution. These include making fossil fuel power plants more efficient; using lower-emitting sources (such as natural gas combined cycle units); using more renewable and nuclear
sources; and using power more efficiently (see Figure 2 above).

Instead, the agency proposed separate numeric standards for different types of units. For modified utility boilers and integrated gasification combined cycle units, the EPA proposed 2
alternative standards of performance. Under the first alternative, all modified units would be subject to a single standard of performance, and under the second, the specific form of the
standard will depend on whether the source makes the modification before or after becoming subject to a CAA section 111(d) state plan. Performance standards for modified natural gas
stationary combustion turbines are set at a level based on natural gas combined cycle technology.

According to the EPA’s Regulatory Impact Analysis (RIA), total compliance costs for the longer-term “building block” BSER-approach (dubbed “Option 1”) are much steeper than for “Option
2,” on which the EPA is taking comment, and which calls for carbon emissions reductions of 24% over a shorter timeframe to 2025. 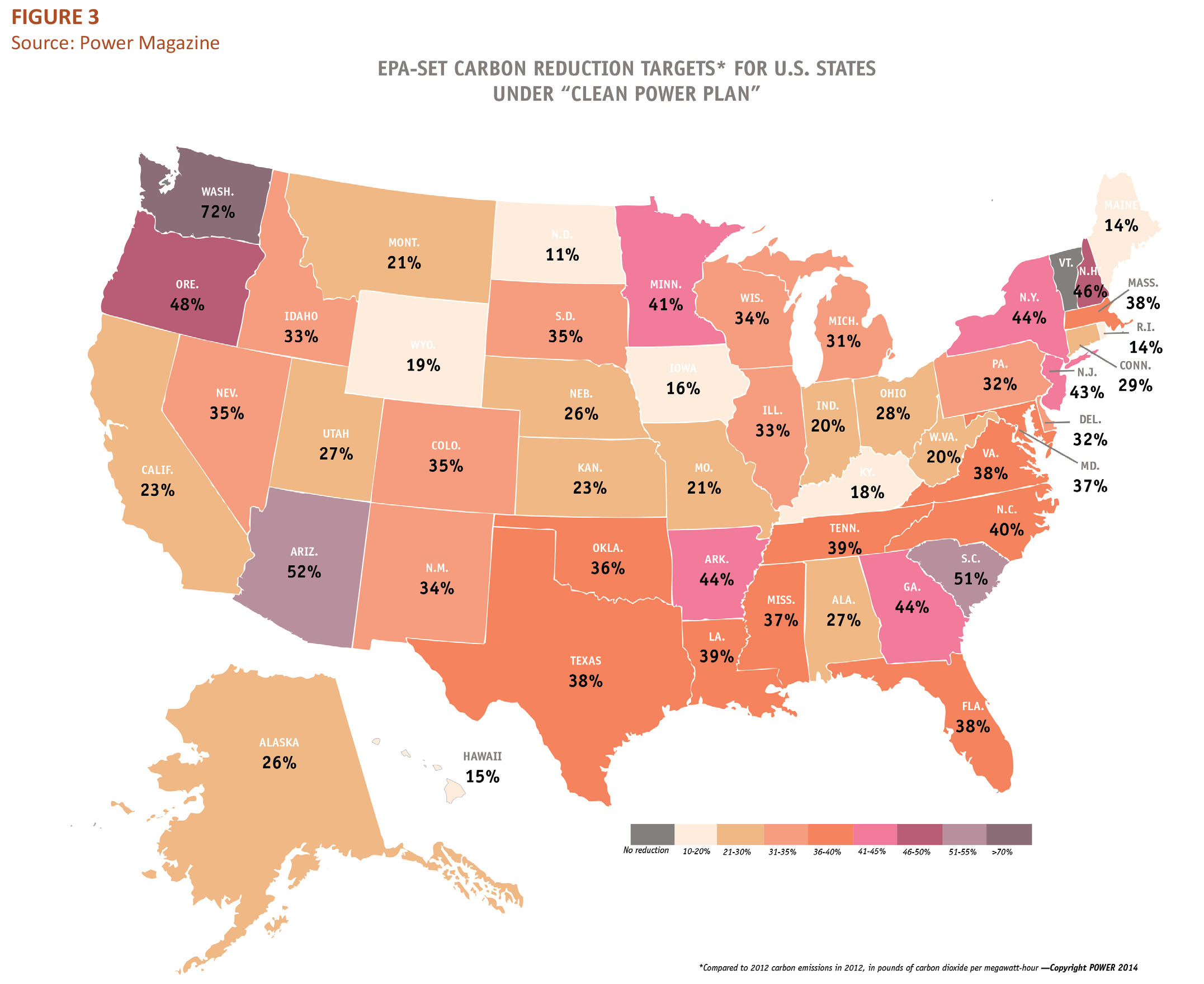 Average delivered coal prices to the power sector could see a steep drop (by 16%–17% in 2020) under Option 1—but that is in large part due to a decline in the use of coal
for power, which the EPA estimates will drop to roughly 30% to 32% in 2030. Natural gas prices, on the other hand, could soar by 9% to 12% in 2020. According to EPA Administrator Gina
McCarthy, climate and health benefits are much higher. “In 2030, the Clean Power Plan will deliver climate and health benefits of up to $90 billion dollars,” she said in a statement on
June 2. “And for soot and smog reductions alone, that means for every dollar we invest in the plan, families will see $7 dollars in health benefits. And if states are smart about taking
advantage of efficiency opportunities, and I know they are, when the effects of this plan are in place in 2030, average electricity bills will be 8% cheaper.”

“This plan is all about flexibility,” she added. “That’s what makes it ambitious, but achievable. That’s how we can keep our energy affordable and reliable. The glue that holds this
plan together, and the key to making it work, is that each state’s goal is tailored to its own circumstances, and states have the flexibility to reach their goal in whatever way works best
for them.