Allen Dickey is a Senior Product Manager of Pipe and Equipment Insulation Systems for Pittsburgh Corning and a NIA-certified insulation energy appraiser. He has more than 28 years in the insulation industry. He holds a B.S. in Chemistry from the University of Pittsburgh. He can be contacted at allen_dickey@pghcorning.com.

The risk of fire is always a concern for LNG facilities, particularly for off-shore platforms and floating production, storage, and off-loading (FPSO) vessels. The combustibility of the insulation system will be a consideration in these cases.

Supports are critical since they need to be well insulated to prevent ice formation and need to be able to accommodate system movement as the system is put in service and the pipe contracts. 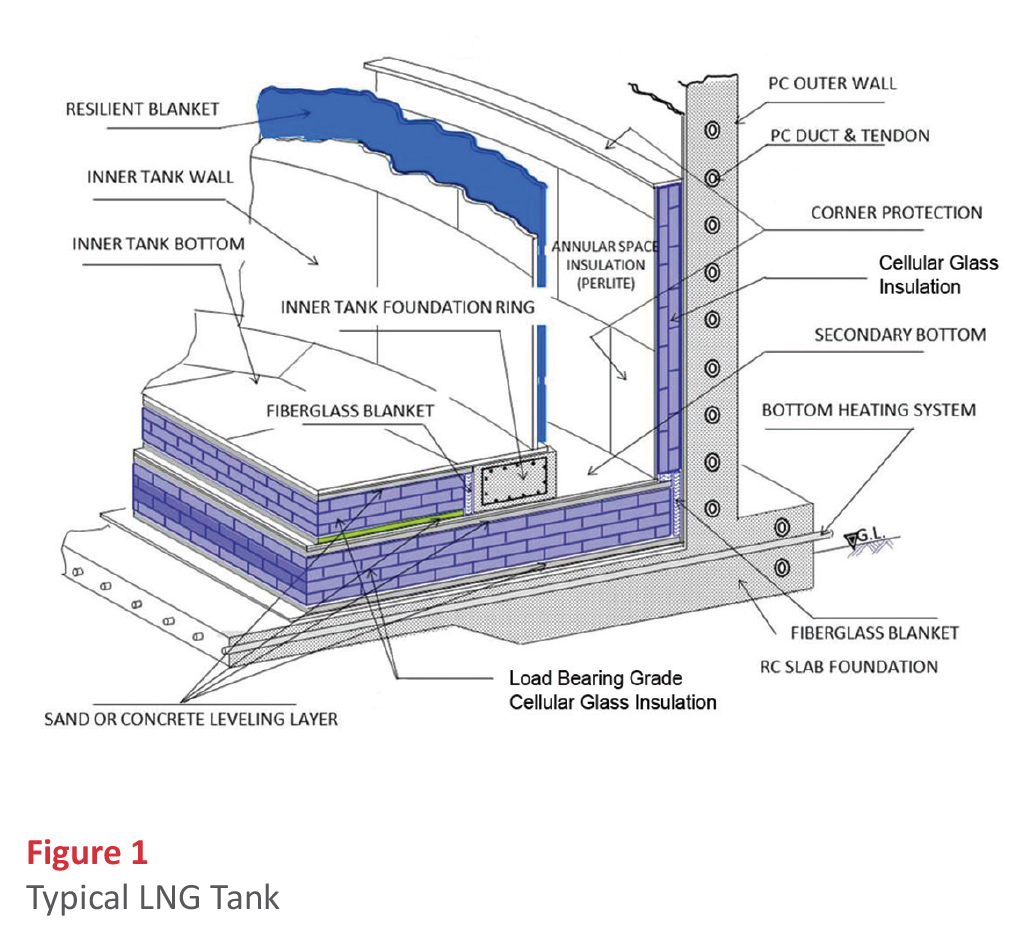 Cellular Glass on the Tank Base

Low tanks have a higher footprint to height ratio than “high” tanks. In a high tank, the support ring would be in direct contact with the tank foundation. Figure 2 shows how the cellular glass insulation is installed as the base insulation as well as for corner protection. The corner protection insulates the outer tank wall against damage in the event of a
tank leak. 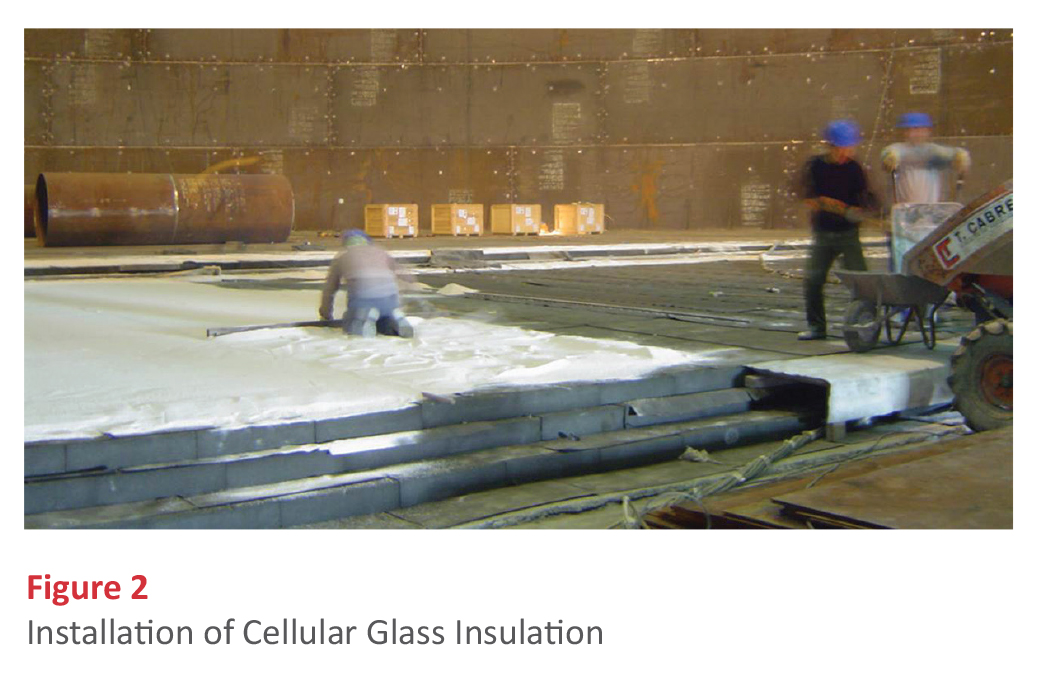 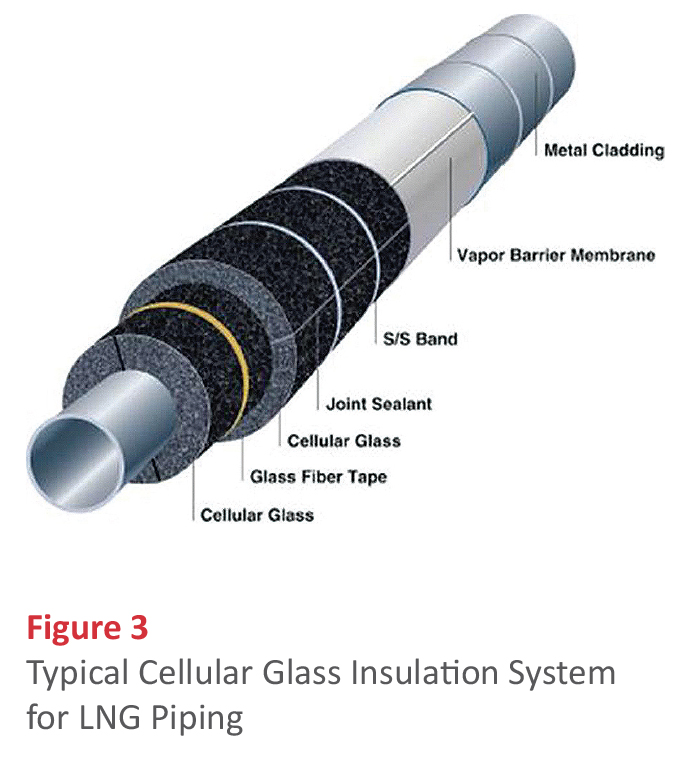 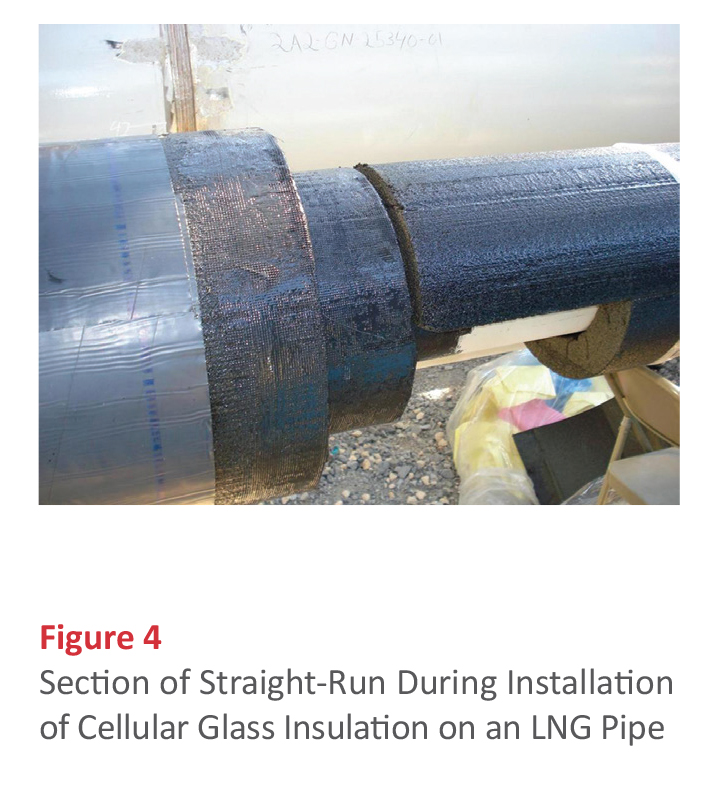 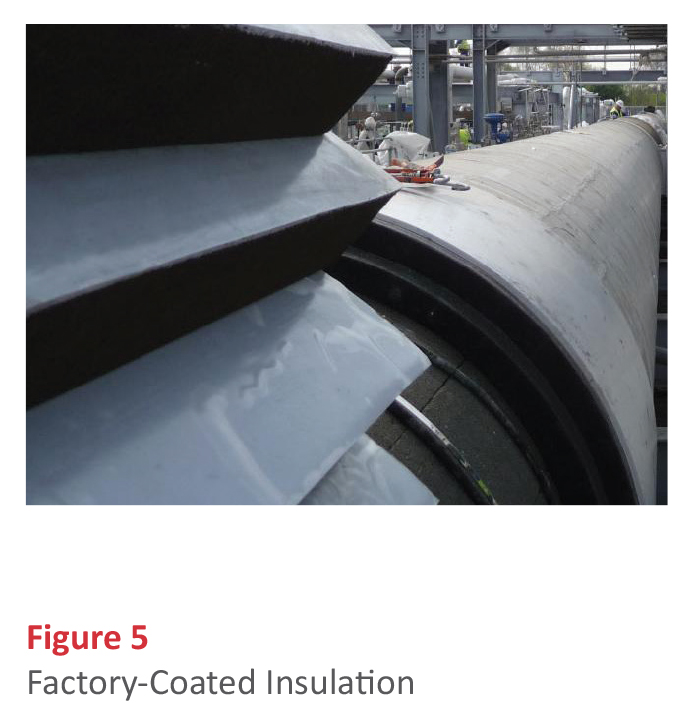 When cellular glass insulation is used for LNG and other cryogenic pipe applications, the general approach is as follows:

Of course, there are variations to this approach. One of the most common is the use of a polymer coating in place of a metal jacket finish.

The typical thicknesses for cellular glass insulation on LNG piping ranges from 5½ inch to 8½ inch, depending upon pipe diameter and other design factors. Often the insulation thickness will be designed to limit heat gain to 8 or 9 BTU/hr•ft2. 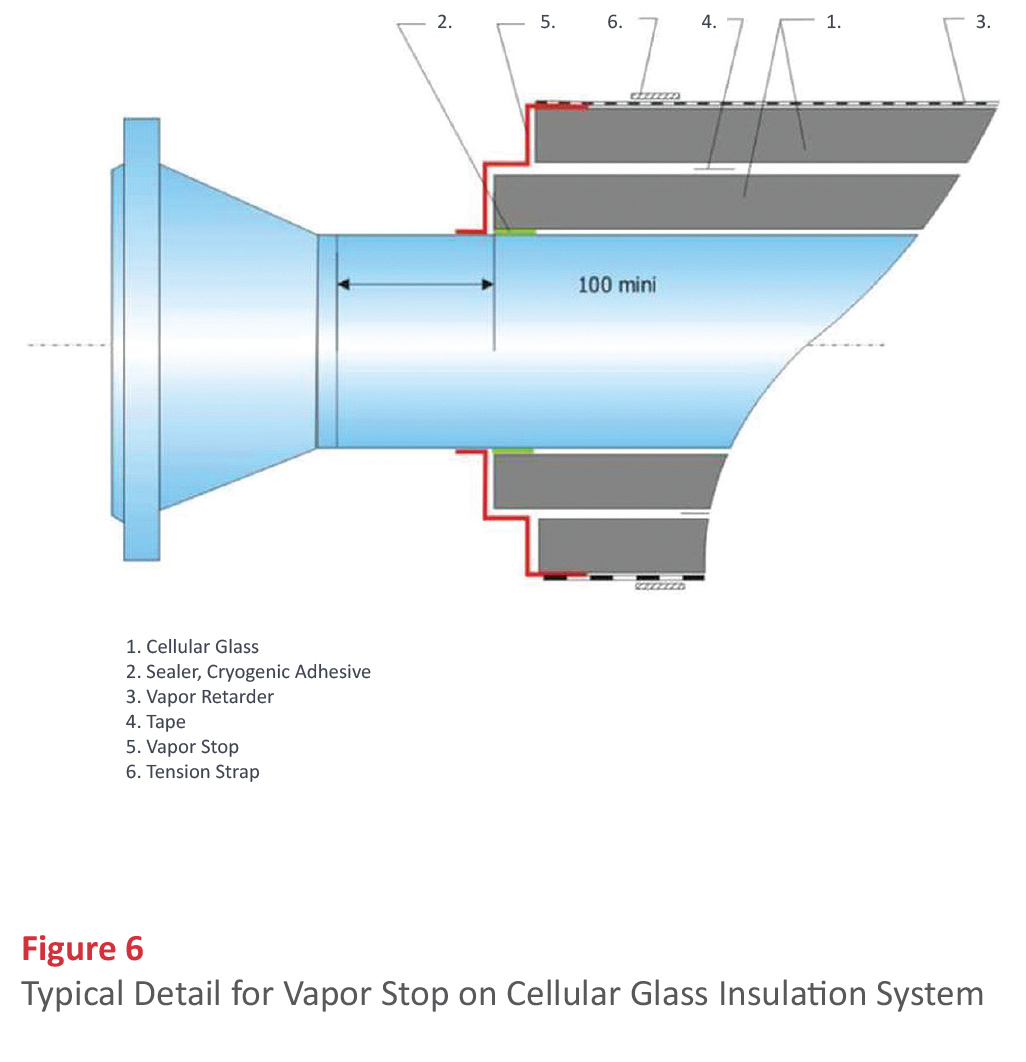 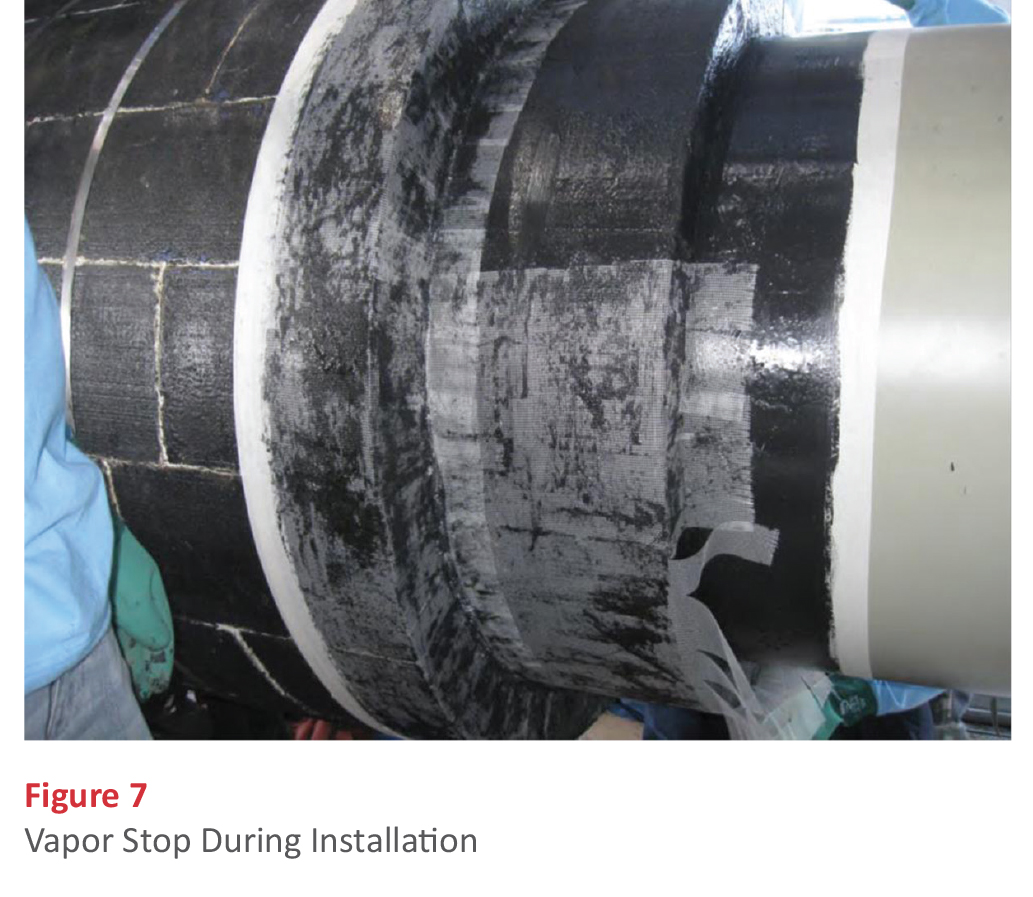 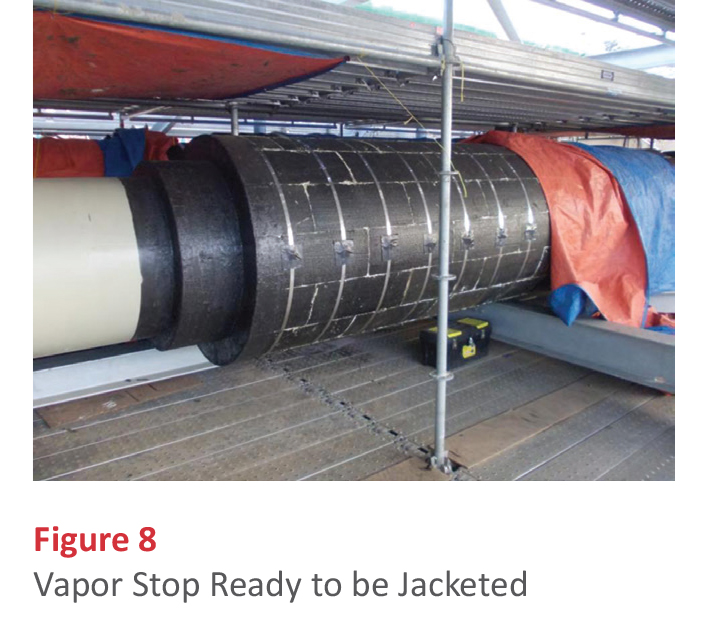 Figures 7 and 8, respectively, show a vapor stop during installation, and the completed detail ready to be jacketed. Note that the band fasteners have been taped to prevent puncture of the vapor retarder that will be installed. 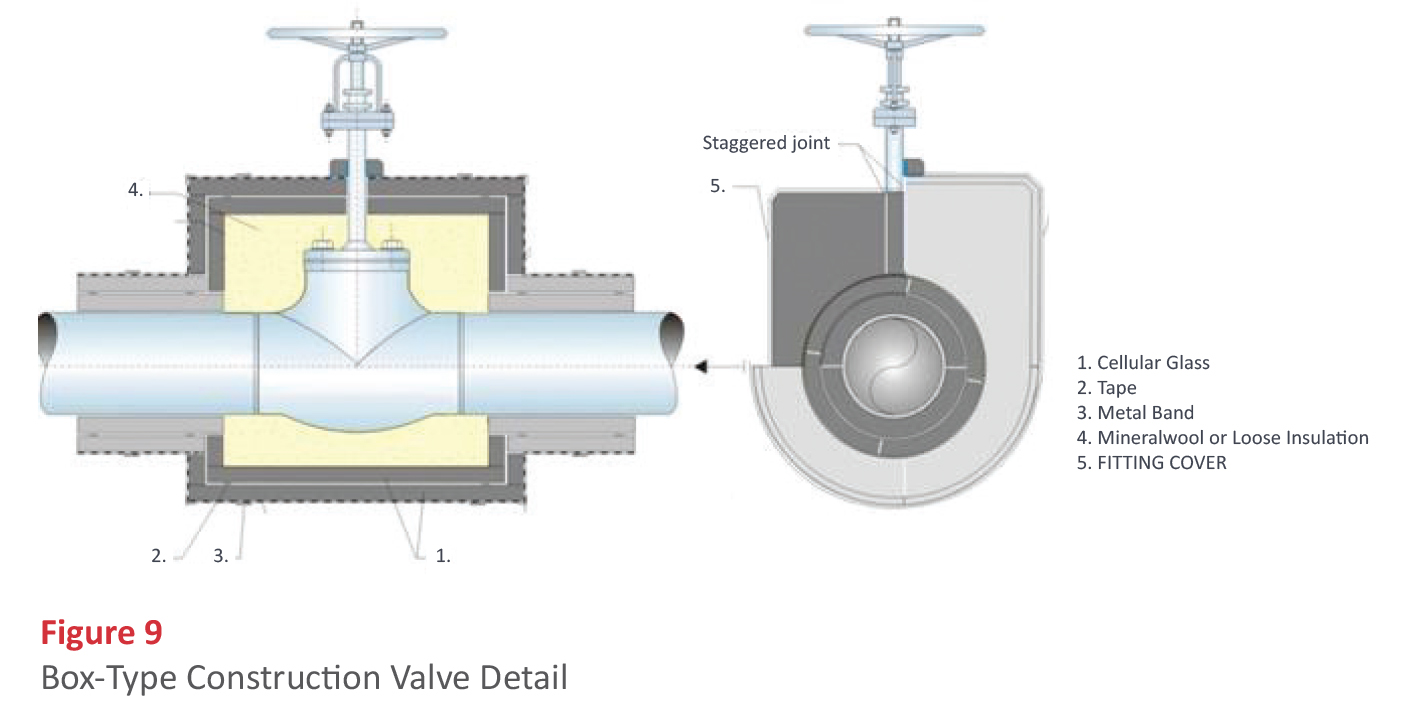 As with the straight-run piping, fittings are also required to be double-layer construction. This poses a challenge for the insulation fabricator when trying to achieve offset joint configuration. In some cases, box-type construction, as pictured in Figure 9, is used. This results in a void that is usually filled with inorganic loose fill insulation. Modern fabrication techniques have given rise to custom-fit valve covers that eliminate the void. These have become increasingly commonplace. Figure 10 shows a cut away model of the typical fitting-insulation system construction. Both a tee and an elbow are shown. Note that even in this case where the fabricator has gone the extra mile to minimize through joints in the system, there are some through joints that are unavoidable. In this example, the vapor retarder is a factory-applied polymer coating. This coating can be, and occasionally is, used as the exterior finish and no metal jacketing is applied. Figure 11 shows the completed view of some fitting covers on a cellular glass LNG insulation system. In this case, a painted metal finish has been used. The painted metal results in the increased emittance of a mastic finish while still providing the durability and mechanical protection of metal. The increased emittance aids condensation prevention. Figure 12 shows another view of some completed elbows finished with an aluminized flexible jacketing along with metal jacketed straight runs; the photo is of a cellular glass LNG insulation system with a polymer coating finish. 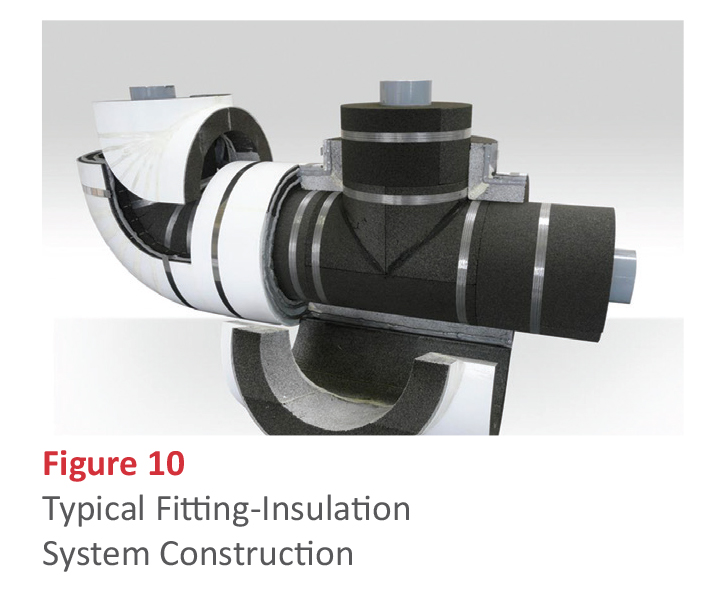 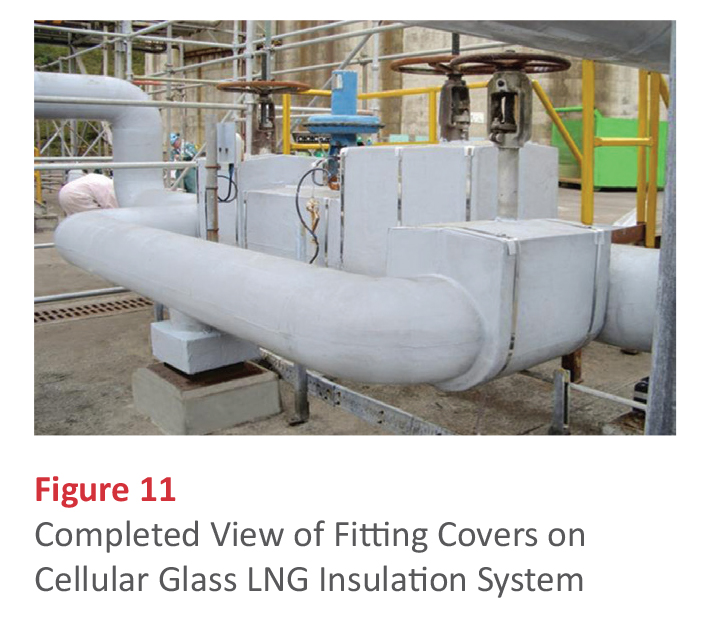 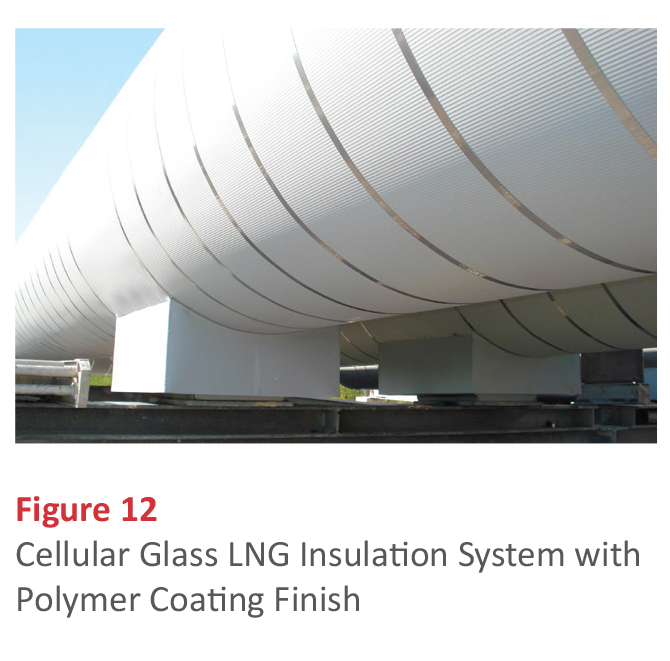 Thus, the particular design and characteristics of the system determine whether contraction joints are necessary.

Cellular glass insulation for LNG vessels, exchangers, large diameter piping, and other equipment follow the same double-layer insulation approach. The primary difference is that the securement of the inner layer is done with stainless steel banding rather than temporary securement with filament tape. Instead of half-sections used on smaller diameter piping, the cellular glass insulation is supplied as curved sidewall segments, head segments, or special shapes, depending on the geometry involved. The outer layer of insulation is sometimes adhered using a low permeability, 2-component adhesive. In this case, the adhesive also serves as the joint sealant. As with the piping, a vapor barrier and metal jacket are installed over the insulation. Where fire protection is included as part of the expectations from the cellular glass insulation system, stainless steel is used as the outer jacketing. 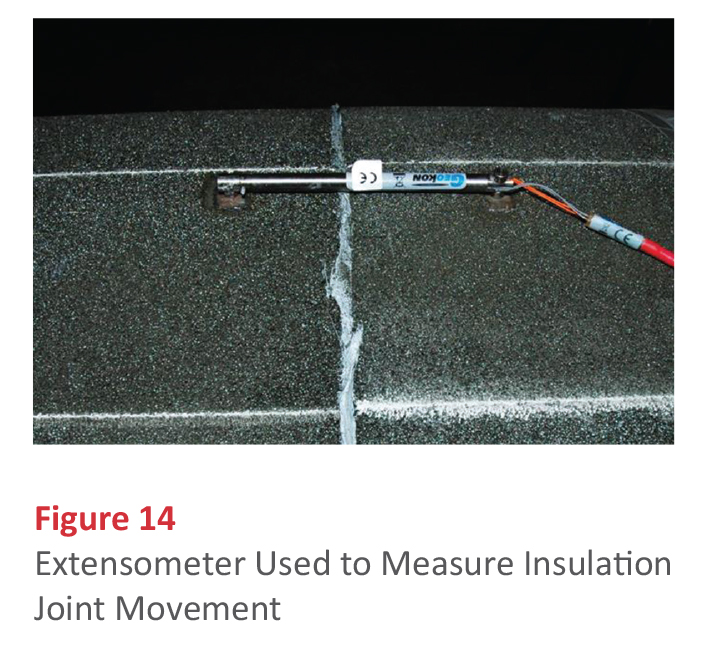 Offsite or pre-insulation is becoming increasingly prevalent with LNG projects. In these cases, LNG modules are constructed off-site then shipped to the project site for final installation. This is done primarily to save labor costs, although in some cases the conditions at the actual project site are so severe that pre-insulated modules are the most practical approach. Figure 16 shows a completed module ready for transport. 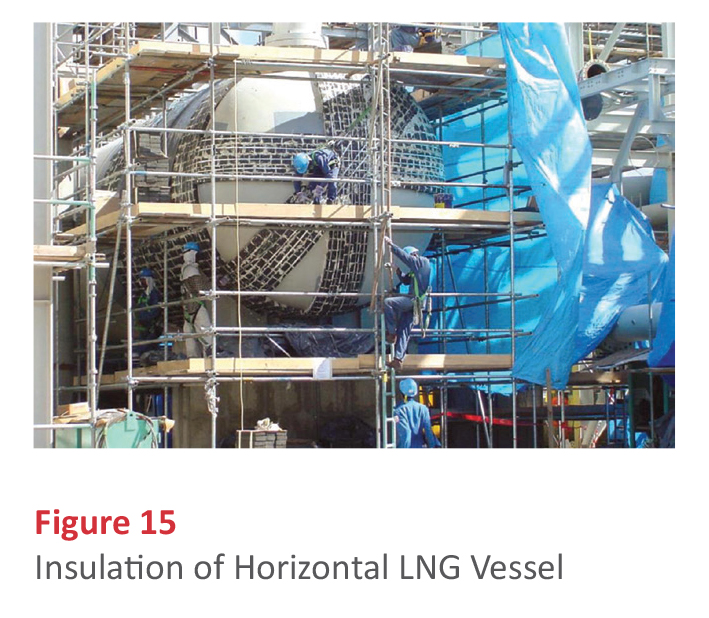 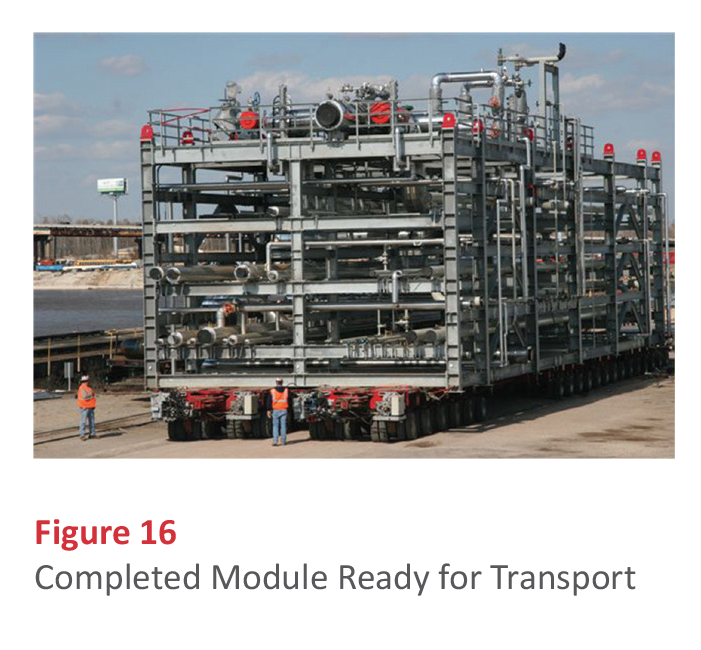 Cellular glass offers a combination of features that are useful in properly insulating LNG systems. With the right combination of design criteria and proper planning, it can be used to increase efficiency and lengthen the life of equipment in LNG systems.