Lack of skilled labor continues to be the greatest challenge facing the construction industry, according to the 2001-2002 U.S. Construction Industry Training Survey. The survey-which asked questions related to construction training trends-was sent to more than 2,000 firms of all sizes and specialties. The labor shortage problem tops the list of challenges for those companies regardless of size, specialty area or revenue category. There’s no avoiding it-the industry is in crisis when it comes to finding enough well-qualified people to do the work. (It’s important to note that the survey was completed before Sept. 11, 2001, so the results don’t reflect the effect of the tragedies and the war against terrorism on companies’ training plans.)

Increased competition was consistently rated as the second most-challenging issue faced. In the current climate, companies are competing for skilled workers as well as for profitable jobs.

The survey also asked about challenging issues facing different levels of managers in the construction industry. This year, the most challenging issue for field managers, project managers, and senior managers was leading and motivating. Managers in this industry, as in all others, are constantly striving to find the best way to get the most out of their most-important resource-their people. For field managers, the second highest rated challenge was a very practical one-planning and scheduling. Project managers’ second most-challenging issue was communicating effectively. Communication showed up as a significant challenge among all levels of management.

It comes as no surprise that respondents indicated that the one factor having the most significant impact on field productivity is the declining skill of craft labor. This drain on productivity was followed very closely by poor job planning. Both of these responses reflect the same industry-wide challenges voiced in other areas of the survey.

Nearly half of the respondents (49 percent) represented general contracting firms, and 12 percent were construction management companies.

Seventy-one percent of respondents represented companies with $100 million or more in annual revenue, and 12 percent reported 2,000 or more employees. Only 37 percent of companies employed less than 500 people at season’s peak.

Owners, chief executive officers, presidents or vice presidents completed the majority (53 percent) of surveys. This statistic continues to be very encouraging, highlighting the high level commitment to training issues among leaders in the construction industry. Such commitment is the cornerstone of successful training and development efforts.

In many other industries, there has been a shift toward delivering training through electronic means instead of traditional, in-person training. Construction, however, remains a very hands-on and traditional industry. Nearly three-quarters of the respondents to the 2001 survey rely mostly on instructor-led, classroom-based training as the mainstay of their efforts. Only 11 percent use technology to allow training to be delivered by an instructor from a remote location, an even fewer (7 percent) use computer-based training that doesn’t require a human instructor.

Survey respondents were asked about the obstacles that inhibit their use of computer-based training methods. The most frequently cited factor was that companies aren’t convinced these methods work as well as classroom training.

Technology does appear to be gaining ground, however, in how companies are tracking and monitoring their training efforts. Nearly two-thirds of the firms responding to the survey use some form of computer record-keeping for their training. Only 23 percent indicated that they still keep records by hand, and fewer still (12 percent) reported that they don’t keep records on training.

It appears that many companies plan to increase their spending on training in the next year-46 percent of respondents plan to increase spending for technical and craft training; 65 percent plan to spend more on management training; and 53 percent plan to devote additional resources to safety training. Hardly anyone responding to the survey indicated that they plan to spend less on training in any area.

While expenditures are on the rise, one troubling relationship persists from previous year’s surveys. Construction companies spend less than half on training trade/craft personnel than they do for senior executives, project managers or field managers. This discrepancy is despite the fact that companies consistently report that the greatest challenge they face is the lack of skilled craft workers. Trade and craft workers also receive less training than the other groups in terms of hours of training.

As might be expected in an often dangerous industry, safety is the training topic often provided by the companies responding to the survey. Almost all respondents (95 percent) indicated they provide safety training. They also frequently offer training in computer applications, management skills, and technical/construction-specific skills. Training addressing the changing face of the construction workforce (diversity, English as a second language, etc.) is much less common in the industry, even though 28 percent of survey participants indicated that inability to speak English is a challenging issue in their company. 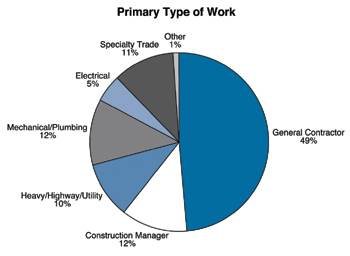 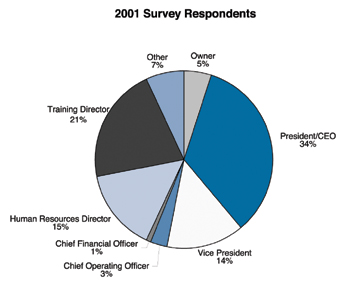