Construction Employment Increases in 138 out of 337 Metro Areas

Construction employment increased in 138 out of 337 metropolitan areas between March 2010 and March 2011, decreased in 153, and stayed level in 46, according to an analysis of federal employment data released by the Associated General Contractors of America (AGC). But association officials said that the industry’s 5-year employment slump is far from over and could worsen as public construction winds down.

“Even with more metro areas adding jobs than in any 12-month period since November 2007, the fact is most areas are far below previous construction employment peaks,” said Ken Simonson, AGC’s chief economist. “With federal stimulus, base realignment, and Gulf Coast hurricane-protection projects slated to end soon, many areas are at serious risk of another downturn in construction employment.”

“There is nothing fiscally responsible about buying high instead of buying low when it comes to infrastructure investments,” said Stephen Sandherr, AGC’s chief executive officer. “If public officials would cut red tape and costly regulations like they are cutting construction budgets, that would help boost private sector demand.” 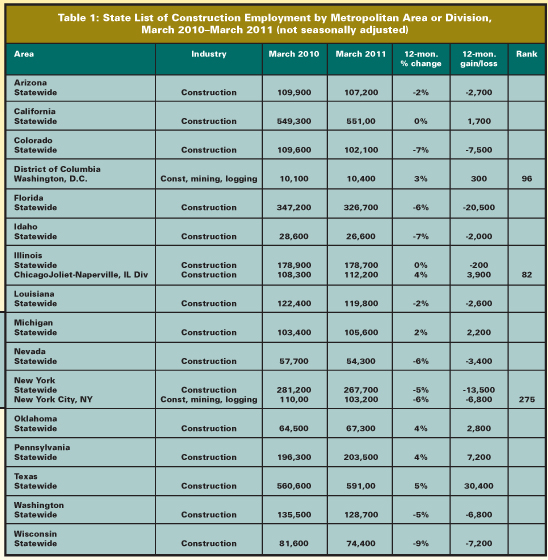