Corrosion under insulation (CUI) of steel operating equipment and piping is a significant issue in the ammonia refrigeration, chilled water, chemical, and petroleum industries. A systems approach to CUI includes the correct material selection and design of the jacketing, insulation, and coating. This approach will help prevent CUI, but many corrosion engineers would agree that electrolytes will eventually find their way into even the best system. Selecting the right coating is extremely important, as the CUI coating is the last line of defense for keeping the electrolyte from the metal surface, which would cause corrosion.

Historically, many different types of products have been used to prevent CUI. One of the most common is a synthetic fabric impregnated with petroleum jelly, which is spiral wrapped around bare piping prior to the installation of the insulation. Known as “grease tapes,” these products do not typically offer long-term performance and can add to the overall insulation system cost by requiring insulation with a larger inside diameter to cover the tape. These tapes are inexpensive and fairly easy to apply, but do not provide long-term performance (See Figure 1).
There are numerous paints and coatings available using silicon and epoxy technologies. Some are available on new pipe and some require multiple coatings. When used in retrofit applications, they require a degree of surface preparation of the existing pipe, which adds significant cost and time to project completion. Although more effective than grease tapes, paints and epoxies must be installed with great care to prevent damage to the surface; in retrofit applications, they often require the system to be shut down to be installed.

Another option is gel-type pipe coatings, which have gained in popularity over the last few years in the food process industry due to their high-quality performance and ease of application. 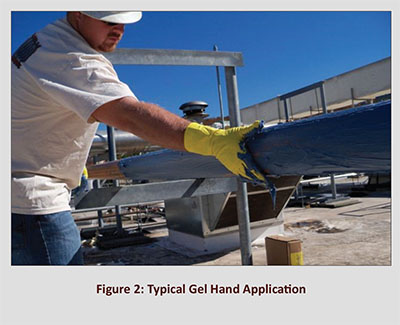 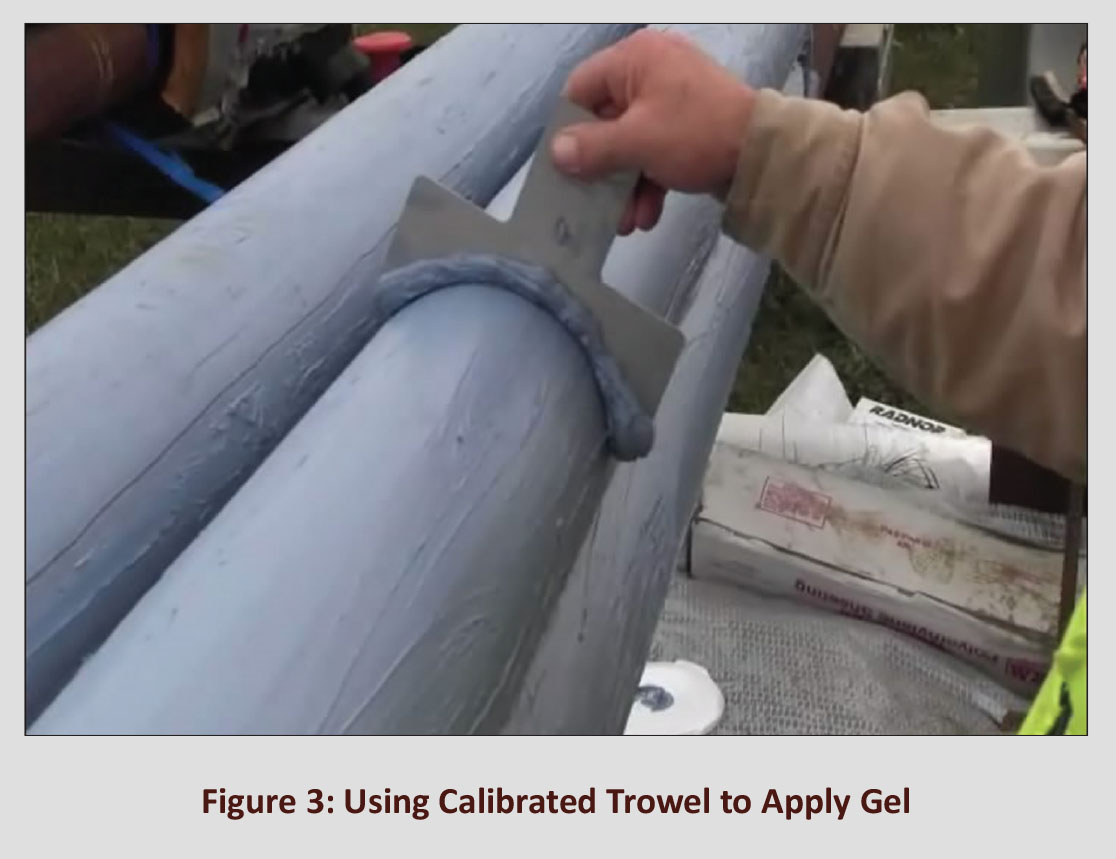 When applying gel coatings on existing piping, surface preparation is generally limited to removal of loose scale or rust using a wire brush. Paints and epoxies, however, typically
require removal of all scale and rust down to bare metal. Gel coatings are typically applied by hand since only as much gel should be applied as can be covered with insulation in the same day. The gels are applied at 25–30 mil thickness. One manufacturer offers stainless steel trowels in the most common pipe sizes that are calibrated to meter the proper amount of gel onto the pipe surface. Gels can also be applied using a brush, or for bigger pipes and vessels, may also be sprayed. See Figures 2, 3, and 4 for examples of these application techniques.

Pipe gel coatings can generally be split into 2 categories: Reactive Gel (RG) technology and Synthetic Petroleum Hydrocarbons with Thickeners (SPHT). There are significant differences in these types of products, which are made using different technologies. They are not the same type of technology, do not have the same performance characteristics, and have not been put through the same laboratory testing and field application trials.

SPHT products are typically used as gear and chain-grease type lubricants; they are not commonly used as a CUI coating. RG products, on the other hand, are specially formulated and patented anti-corrosion products that are primarily designed to be used in CUI applications. RG products have the ability to form a mineralization layer as an integral part of the surface of the pipe; this prevents undercutting where moisture can get under the coating and begin the corrosion process.

A CUI coating needs to have various properties in order to be successful at mitigating corrosion. A few basic characteristics of a good CUI coating are thermal stability, the ability
to resist water wash off, and the ability to protect the substrate from corrosion. 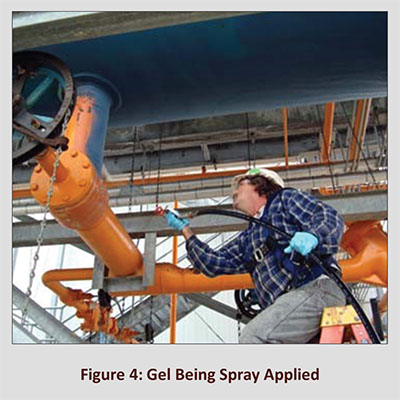 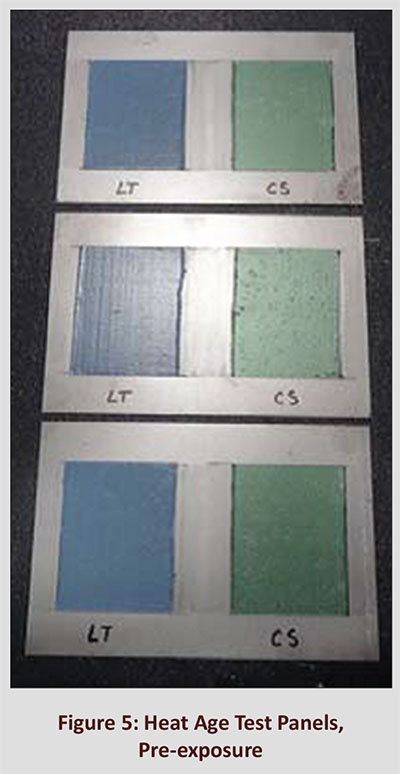 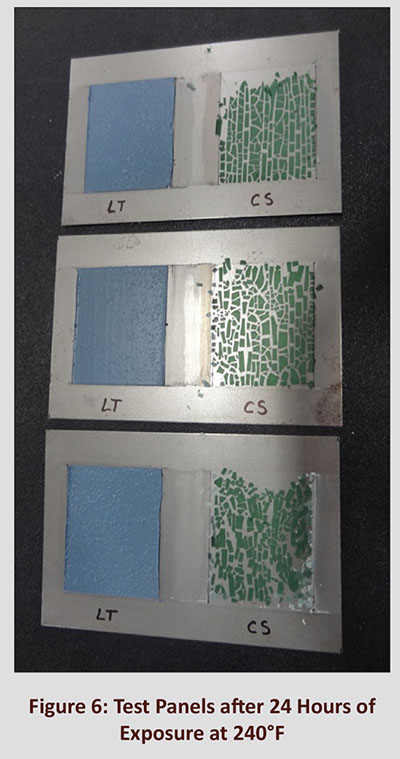 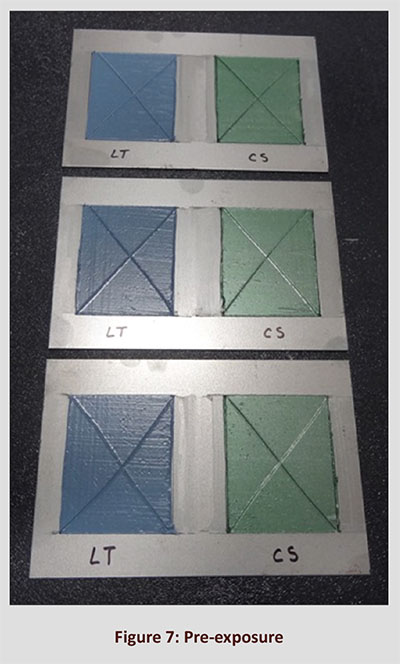 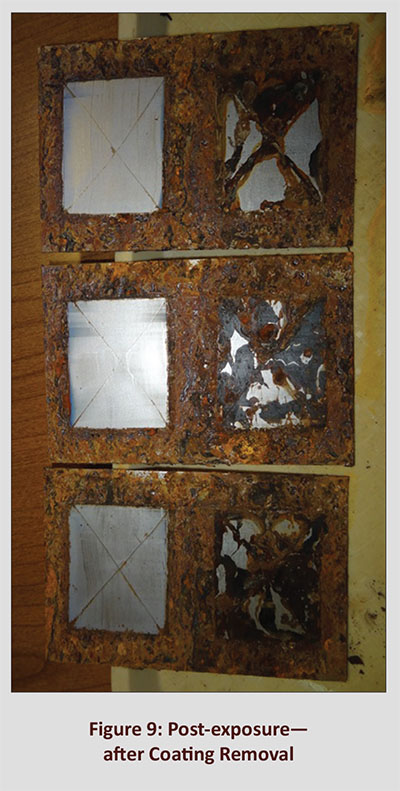 An independent lab tested both RG and SPHT side by side at a thickness of 25–27 mil with an “X” scribe for 504 hours.2 You can see the results in Figures 7, 8, and 9.
An “X” is commonly added to this type of test to show resistance (or lack of resistance) to edge undercutting. 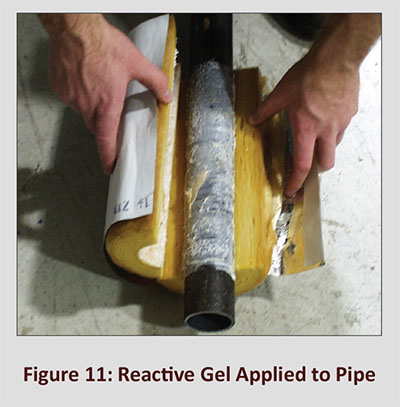 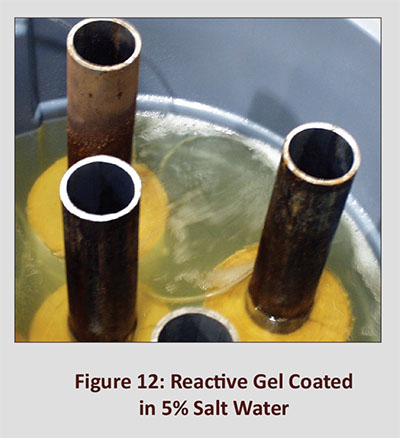 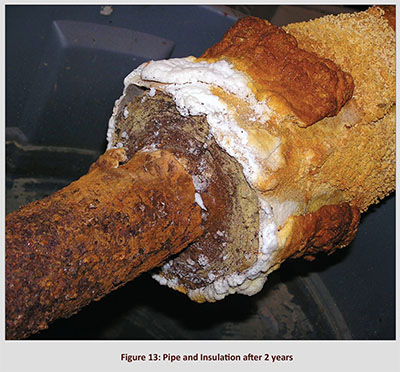 In ammonia refrigeration and other very low-temperature applications, where system integrity and worker safety are important considerations, engineers will need to closely evaluate the
above factors in choosing the proper gel technology to use.