Cutting Through the Noise on Wall Construction and Acoustical Design Criteria

Gary Brown has more than 30 years of acoustical and vibration consulting experience. Since joining McClure Engineering (www.mcclureeng.com) in 2012, he has been active in on-site field testing, architectural acoustics, mechanical systems sound isolation, performance space acoustics, vibration analysis, industrial acoustics, and noise control. Prior to joining McClure, he worked at Engineering Dynamics International (EDI), which became EDI Acoustics Inc. when he took over operations in 2010. McClure acquired EDI Acoustics in 2012. 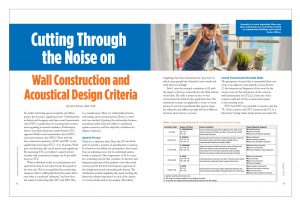 For multi-unit living spaces, hospitals, and offices, privacy has become a significant issue.1 Unfortunately, architects and designers only have sound transmission class (STC) to guide them in choosing wall constructions regarding acoustical insulation. Furthermore, there is very little distinction made between STC, apparent (field) sound transmission class (ASTC), and noise isolation class (NIC).2 Even with the best construction practices, ASTC and NIC can be significantly lower than STC3—5 to 10 points. With poor construction, this can be much more significant. By examining STC as it relates to speech privacy to guide wall construction, designs can be provided based on STC.

When individuals reside in condominiums and apartments, they do not want to hear the people in the next unit. This is accomplished by constructing adequate walls to sufficiently block the sound. However, what is considered “adequate,” and how does this relate to wall ratings like STC and NIC? This is a complex issue. There is a relationship between wall ratings and acoustical privacy. There is a tried-and-true method of pairing the relationship between articulation index (AI), the ability to understand spoken sentences, and the subjective conditions for degrees of privacy.

Privacy is a subjective term. Thus, the AI4 was developed to provide a measure of quantification to privacy. It is based on the ability not necessarily to hear sound from an adjoining room, but to understand spoken words or sentences. The computation of AI is a number-crunching exercise that considers (1) the level and frequency spectrum of the speaker’s voice (the sound source), and (2) the level and frequency spectrum of the background sound surrounding the listener. The calculations include weighting the sound reaching the listener by relative importance in each of the sixteen 1/3-octave bands used in the analysis. The relative weightings have been determined by “jury tests” in which many people have listened to test sounds and rated them accordingly.

Table 1 rates the nominal correlation of AI with the degree of privacy, as described in the third column of the table. The table is based on face-to-face conversation but holds for the application here. The underlined sections are applicable to room-to-room privacy. It must be remembered that privacy issues are subjective and different people will have different reactions about privacy concerns. 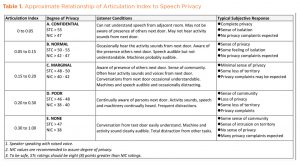 The perception of sound that is transmitted from one room to an adjacent room depends on four factors: (1) the intensity and frequency of the sound in the source room, (2) the attenuation of the common wall (transmission loss [TL]), (3) the area of the common wall, and (4) the acoustical absorption in the receiving room.

STC5 and ASTC are intended to measure only the TL of the common wall. STC measurers the TL in a laboratory6 setting where all parameters are under the control of the testing agency. ASTC measures the TL in a field setting where parameters of the common wall are heavily dependent on design considerations and workmanship, even though the primary structure of the wall is the same in both cases.

NIC7 measures the simultaneous combined effect of factors (2), (3), and (4). NIC makes sense only in field conditions, so it is often referred to as FNIC, meaning “field” tested.

The purpose of the STC, ASTC, and NIC measures is to reduce TL or noise reduction (NR) measured in sixteen 1/3-octave bands, from 125 Hz through 4,000 Hz, to a single number rating. The “class” rating permits gross comparison of the acoustical attenuation of partitions. However, TL and NR are frequency dependent—i.e., they vary with frequency for any given construction or any particular room absorption. Unfortunately, STC, ASTC, and NIC do not consider attenuation or acoustical absorption in frequencies lower than 125 Hz. Often, problems of room-to-room sound transmission lie in the lower frequencies.

STC, ASTC, and NIC are often erroneously used interchangeably. However, each has a specific application and meaning. Improper use in specifications can result in unintended consequences if the attendant acoustical performance is brought into question.

All three of these rating systems are similar in that they are a single number rating derived from measuring sound attenuation (TL or NR) from one location to another in 1/3-octave bands from 125 Hz through 4,000 Hz. All three compute the single number rating by the same procedure, even though the procedure refers to STC. ASTC and NIC both evolved from STC to meet specific needs.

STC and ASTC procedures are specifically applicable to walls. In STC and ASTC, the TL values are attenuation values corrected for the acoustical absorption of the receiving space. The reason for the correction is that they are not intended to measure the sound isolation values of the wall. STC is a laboratory test procedure. ASTC is an in-situ field test procedure.

NIC measures only the sound attenuation between two spaces and calls this NR. NR is most meaningful in real-world situations where the total sound in the receiving space is at issue.

STC provides a comparison of wall acoustical insulation properties based on basic construction only. Generally, it is not a good idea to use STC in specifications for walls where the intent is really ASTC or NIC. Use STC where the intent is to specify specific sub-assemblies such as doors, windows, etc.

NIC is appropriate if the intent is to identify the total acoustical insolation properties including the acoustical absorption in the receiving space. In other words, it specifies the acoustical isolation regardless of how it is achieved.

Key issues in room-to-room privacy include: (1) room-to-room sound transmission, and
(2) background sound in the listener’s room. Room-to-room sound transmission is best defined by NR, since it includes all of the following parameters: wall TL, common wall area, sound flanking paths, and absorption in the listener’s room. Of course, level of the speaker’s voice is also an important parameter but not one that is within the purview of the design team. In Figure 1, the NR values are taken from the standard noise isolation contour for the stated NIC, and the background in the listener’s room corresponds to the stated noise criterion curve. A speech spectrum curve is taken from ANSI S3.5 and the typical speech level is adjusted to 78 dBA. Two speech levels are used: standard (78 dBA), and raised (88 dBA). 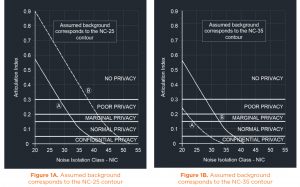 Figure 1 provides some insight into requirements for speech privacy. However, this figure should not be taken as recommended design practice.

Figure 1 makes use of NR and NIC that incorporated issues of common wall size and acoustical absorption in the listener’s room. Experience dictated that the design STC for a wall should be at least 10 points greater than the expected NIC. For an NC-35 background and standard speaking voice, the chart suggests NIC of 30 or greater for confidential
privacy. One should specify an STC 45 to 50 wall construction and pay special attention to potential flanking paths.

STC 50 walls are specified in many building codes as minimum STC between common walls of apartments and condominiums. However, STC 50 is inadequate for guarding against high voice levels or low background sound.

To reiterate, privacy is a continuum, not a sharp division, as shown in Table 2. Informed judgment is an essential part of providing the degree of privacy expected by the occupants of multifamily housing. Persons moving to a condominium from a private residence may require more privacy than someone who has lived previously in a multifamily environment. 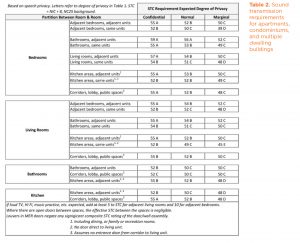 Obviously, the larger the area of a wall between two rooms, the more acoustical power will be transmitted from one room to the other. So, to better compare the properties of two walls, a correction must be made for the relative wall areas. Also, the more acoustical absorption in the receiving room, the more transmitted sound is absorbed, thus lessening the sound level in the room. A correction for the absorption must also be made to compare two wall constructions. To complete the picture, other similar measures are used and are more meaningful—NR and NIC. All STC and ASTC tests start out with the same basic measurements—the numerical difference between the sound level (in decibels) on the noise source side of the wall and the noise receiver side of the wall. For NC and NIC, no correction is made for common wall area or acoustical absorption in the receiving room. This difference is acoustical NR. 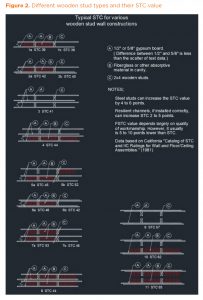 The demand for soundproof spaces and increased privacy is continuing to grow. It is important that these needs are taken into account during the design phase. However, to develop the best solution, there are several factors that designers and the construction community should consider in selecting walls for their acoustical insulation values.