Following a damaging hail storm in 2011, the owner of a food-processing facility discovered his original ammonia refrigeration pipe insulation system’s protective jacketing had become heavily damaged. Upon further inspection conducted soon after the hail storm, the owner discovered that the pipe insulation material had become ice laden and wet over the course of its 15-year life. This original insulation was covered with an All Service Jacket (ASJ) vapor retarder and aluminum jacketing on the straight pipe sections, and a 20-mil thick vapor retarder mastic and polyvinyl chloride (PVC) jacketing was used on the fittings. As a consequence of his inspection, the facility owner made the decision to replace all the roof-top ammonia pipe insulation as his schedule and budget would allow. Replacement has been conducted during winter months with the ammonia pipes charged and in operation. As of September 2014, much of the pipe insulation had already been replaced, and most of the remainder was scheduled to be replaced in late 2014 and early 2015. There is a total of 4,756 linear feet of refrigeration pipe that is affected, with sizes ranging from 3/4-inch to 12-inch nominal pipe size (NPS) and design operating temperatures from a low of -25°F to a high of 60°F. The replacement pipe insulation system includes a continuously sealed, polyvinylidene chloride (PVDC) film vapor retarder sealed with matching tape and new aluminum jacketing for protection.

Some of the following conclusions are based on the assumption that ice-laden and saturated pipe insulation has a greater thermal conductivity than the same insulation in a dry condition with no ice or water within it. There is evidence to support this assumption. For example, W.F. Cammerer, a German scientist, conducted tests in 1987 on 3 types of insulation—wet phenolic foam, expanded polystyrene (EPS), and mineral wool insulations—and reported his data graphically.1 The results for the 2 cellular insulation materials, EPS polystyrene and phenolic foam, show a pronounced increase in thermal conductivity as a function of water content expressed as percent by volume. Furthermore, the mathematical relationship appears to be best described by a second order polynomial rather than a straight line. 2 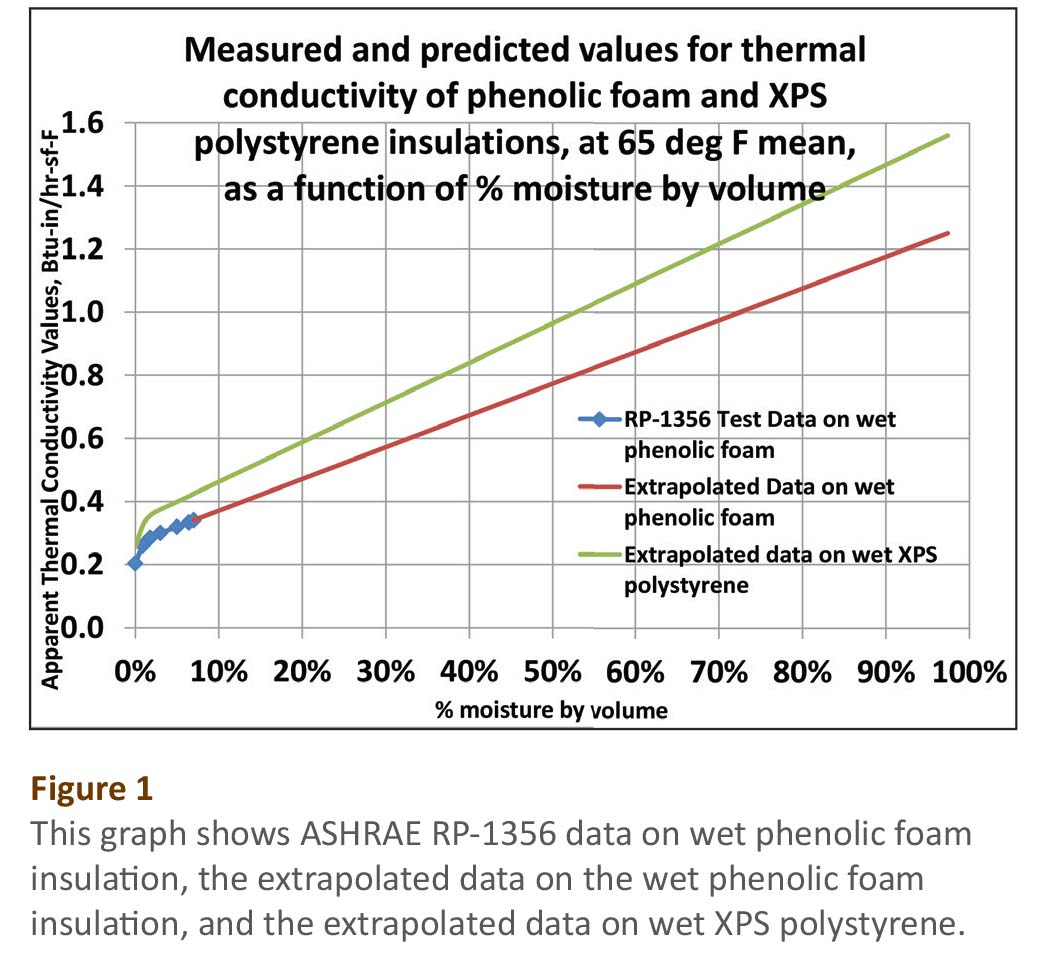 RP-1356 showed that dry phenolic foam pipe insulation on a 42°F pipe had a measured thermal conductivity of 0.20 Btu-in/hr-ft²-°F; with a 5% water content by volume, it had a measured thermal conductivity of 0.31 Btu-in/hr-ft²-°F.  his thermal conductivity for the wet insulation, with 5% water content by volume, represents an increase of 56% over that of the dry material at the same mean temperature. Note that these tests were conducted in a hot, humid environmental chamber on phenolic foam pipe insulation with no sheet or film vapor retarder. Thus, the vapor condensation and subsequent increase in moisture content of the insulation occurred in a matter of about 24 days. The RP-1356 tests were accelerated compared to what one would expect in a real application, where there would be a sealed vapor retarder covering the insulation to slow water-vapor migration from the air to the cold pipe beneath the insulation system. The following estimates of thermal conductivity curves for wet and ice-laden XPS polystrene are made using the more recent and conservative RP-1356 data based on phenolic foam, rather than the Cammerer data. 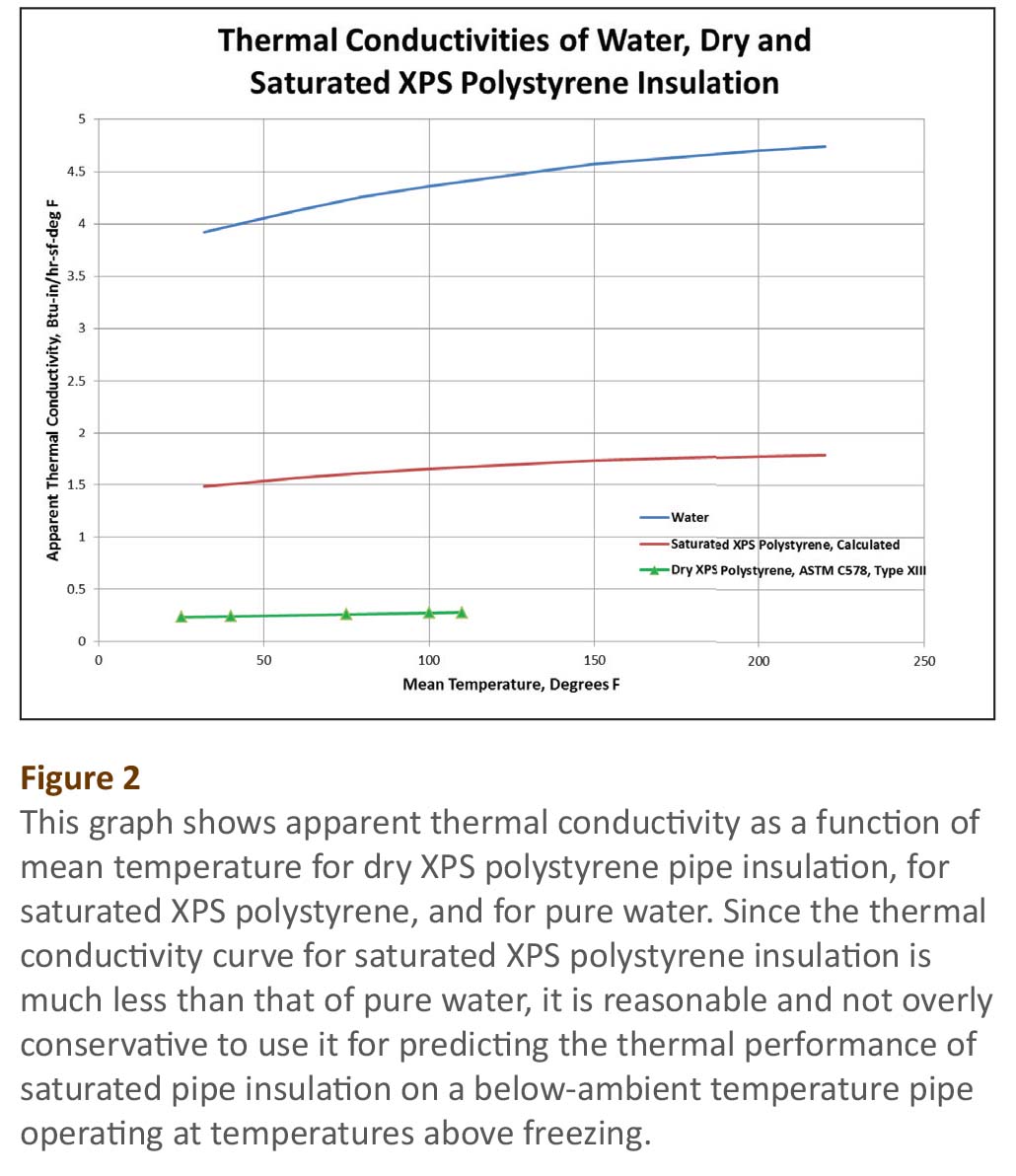 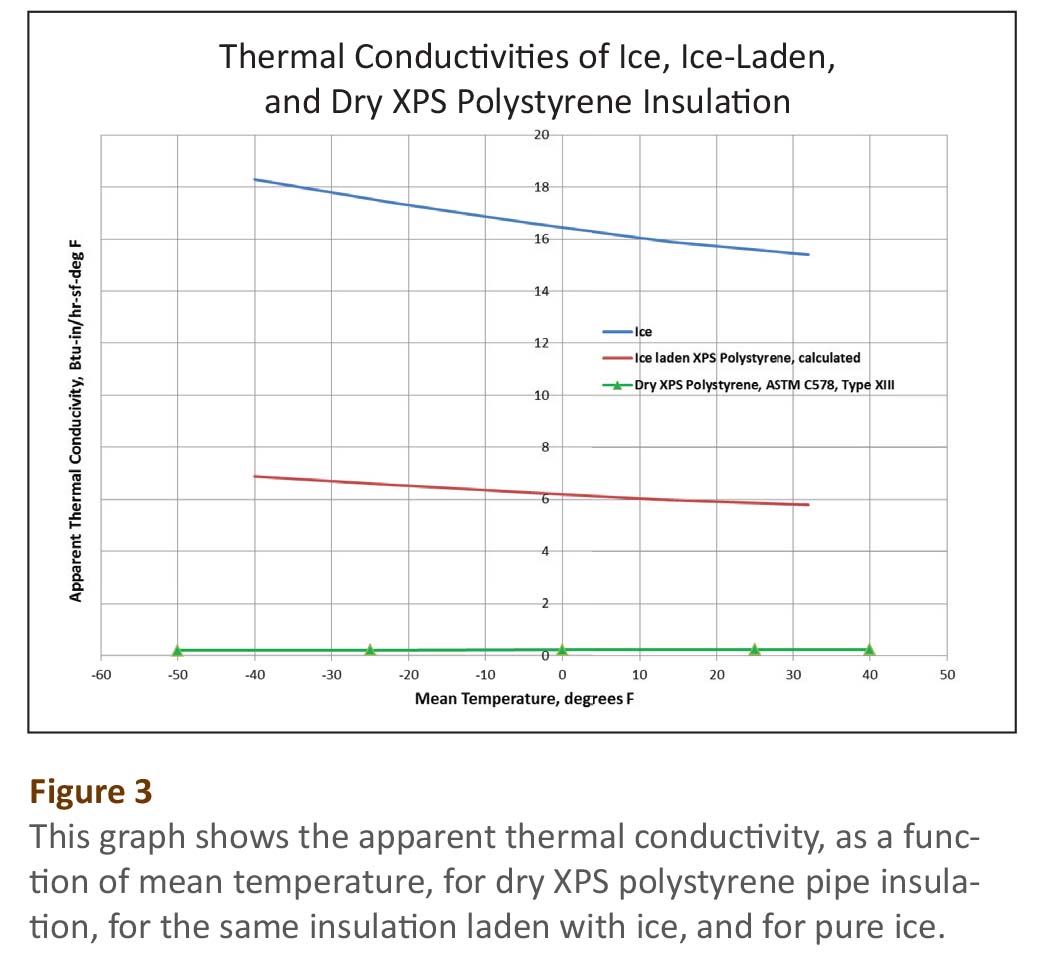 Estimating the Heat-Gain Savings by Re-insulating the
Refrigerant Pipes

Using the publicly available computer program known as 3E Plus® (available for free from the North American Insulation Manufacturers Association [NAIMA] at  ww.pipeinsulation.org), it was possible to calculate heat gain for the refrigerant pipes both before and after insulation replacement.8 To calculate this, an average ambient temperature of 65°F is assumed over the course of the year (note: this temperature is not intended to represent a design ambient temperature, but simply an average for the year), and an average wind speed of 5 mph. The polyolefin manufacturer’s data was used for the new replacement insulation, since it has values very close to those for dry XPS polystyrene insulation at corresponding mean temperatures. Table 1 gives thermal conductivity values as a function of mean temperature for the polyolefin insulation used in this analysis.

Using the facility owner’s as-built engineering drawings for refrigerant pipe temperatures, sizes, and lengths, and records for pipe insulation thicknesses (which were not changed with the insulation replacement), it was possible to calculate heat-gain savings on an annual basis for each pipe line. They were reduced by several percent to account for scheduled defrost cycles (provided by the facility owner), and then the heat-gain savings were summed. Tabulated results, pipe by pipe, are shown in Tables 1 and 2. As Table 2 shows, the cumulative results came out to a total annual heat gain savings of 3,149 million Btus for the 4,756 linear feet of insulated refrigerant pipe. 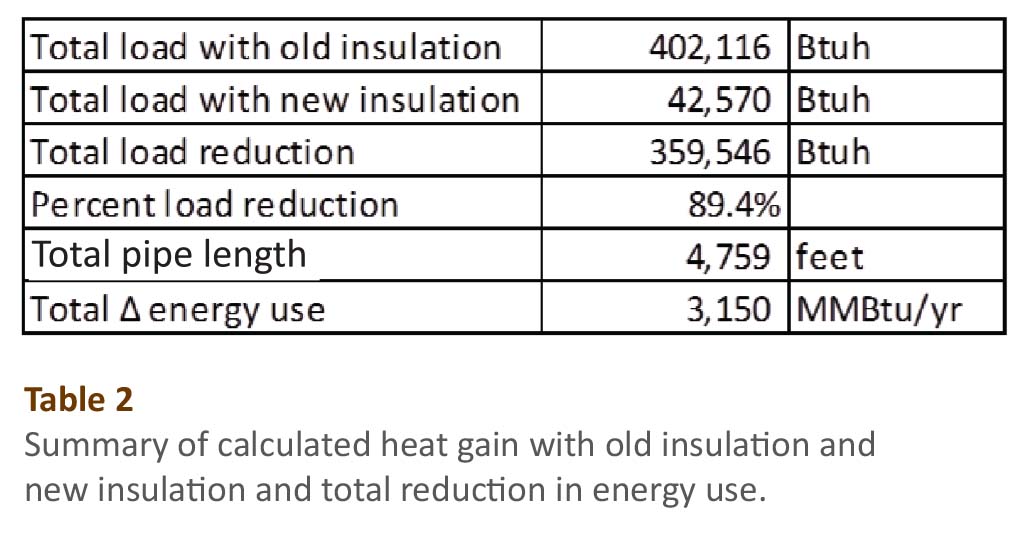 Equation 210 was used for calculation of LCC, seen below.

Since the 2 curves cross at an assumed COP of about 2.75 (see Figure 4), that value represents the break-even point for this $550,000 investment in new, replacement insulation, based on future energy savings (based at $0.10 per kWh and an annual interest rate of 2%). Thus, for a COP value < 2.75, this new, replacement insulation system would have an estimated lower LCC over 20 years than the original, ice-laden insulation system. At higher values of COP, leaving the original, ice-laden pipe insulation system in place and using the above assumptions, would have been more cost effective. However, it would still result in the use of greater amounts of energy and is not recommended. 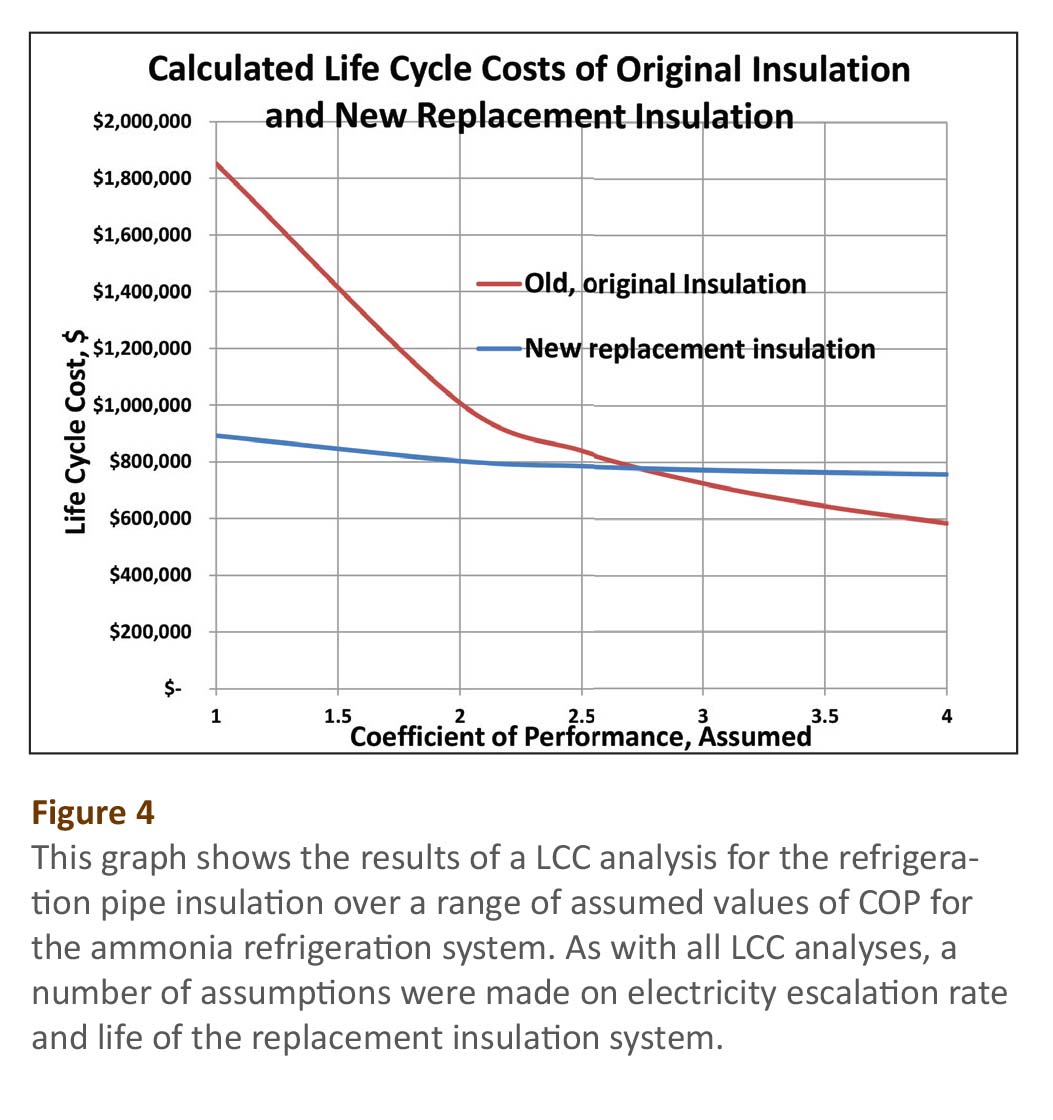 A separate energy analysis showed that re-insulating the roof-top refrigerant pipe led to an annual thermal energy savings of 3,149 million Btus. This results in an estimated 89.4% load reduction on the insulated pipes. An LCC analysis concludes that with a refrigeration system COP less than 2.75, this insulation replacement would have a lower LCC than leaving the original, ice-laden and wet pipe insulation in place.

It is recommended that either insulation manufacturers or the refrigeration industry test wet and ice-laden insulation materials, of the types used on ammonia refrigeration pipes, for thermal conductivity as a function of moisture content. This will allow economic analyses such as this to be more refined, with fewer assumptions. It is also recommended that mechanical designers specify insulation vapor retarder and jacketing materials that are recommended by the 2014 revision of Chapter 7 of the International Institute of Ammonia Refrigeration’s Ammonia Refrigeration Piping Handbook.11 Additionally, it is recommended that mechanical designers use software that models simultaneous heat and mass transfer to improve predictions of water-vapor transmission into refrigeration pipe insulation. Doing so will provide the opportunity to make improvements in water-vapor control strategies for pipe insulation systems.