According to the U.S. Department of Energy (DOE), there are more than 226,000 manufacturing facilities in the United States. Most of these can economically benefit, to varying degrees, from proper insulation of their steam and process heating systems.

Heat is a key ingredient in the creation of almost all manufactured goods. At stake is valuable energy used to transform works in progress into final goods. Proper insulation of industry’s mechanical systems is therefore a central strategy for conserving energy—and money—that otherwise would disappear, literally, into thin air.

Accurate measures of the potential market for mechanical insulation are difficult to develop. Most steam-facility managers lack the time and motivation to take inventory of their facilities’ current insulation profiles. In other words, they have no idea how their current insulation usage compares to an economically optimal level. Even if facilities do maintain such inventories, the results are regarded as confidential.

Perennial questions about the mechanical insulation market may include:

Definitive answers to these questions remain elusive. However, diligent observers can get a limited view of the insulation market through energy assessments (audits) published by the DOE, whose Save Energy Now (SEN) program is conducting energy assessments for many of the largest industrial facilities in the United States. The DOE began promoting these assessments in the wake of the 2005 hurricane season, which disrupted energy markets. U.S. industrial profitability was severely threatened by dramatic spikes in the price of natural gas and other forms of energy. In an unprecedented policy initiative, the DOE offered free energy assessments on a first-come, first-served basis to facilities that applied for assistance and met eligibility criteria.

The DOE’s energy assessments investigate many energy-saving opportunities, not just insulation. Common assessment recommendations also include combustion tune-ups, steam-trap improvements, condensate return, and changes in operating procedures. Participating companies got a detailed, confidential assessment, while a “sanitized” version (with confidential information removed at the recipient’s discretion) was developed for publication. In 2006, 200 such assessments are being produced, with an additional 250 to be delivered in 2007.

The initial facilities reviewed included a wide variety of industries and locations. The first 53 facility assessments (through September 2006) are posted on the DOE’s website, www.energy.gov. This first batch of assessments was studied for this article, with a particular focus on insulation recommendations. Insulation opportunities were recorded in 27 (or 51 percent) of the assessments. The facilities that received insulation-improvement recommendations are listed in Table 1.

While each report is enlightening, the collection is not compiled consistently. This is because participating companies enjoyed editorial power over what information would be included in the published versions of their reports. Here are examples from reports where some estimates of savings attributable to insulation improvements are included (savings estimates were calculated using fuel prices that prevailed when the assessments were conducted):

The assessments give an idea of industrial insulation potential.

While the DOE assessments did not consistently estimate the cost and savings impact of recommendations, the findings were at least classified as “near-term,” “medium-term,” or “long-term” opportunities, defined as follows:

Insulation costs were calculated in only a few of the assessment reports. Two recommendations were priced at $10,000 or under. One fell in the range of $10,000 to $80,000. One project was estimated to cost $80,000 to $200,000. These observations are insufficient to make robust generalizations about the overall value of potential mechanical-insulation contracts. However, the following interesting conclusions can be made even from this limited study:

The DOE continues to publish energy assessments generated by its Save Energy Now program. The DOE is continuing the program into 2007, which will make even more reports available for analysis. A more thorough description of the DOE’s Save Energy Now program, as well as information on its assessments and plans for future activity, can be found at www.eere.energy.gov/industry. 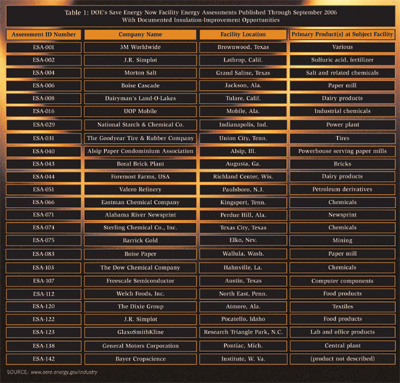