How Oil, Gas, and Shale Will Impact the Construction Industry

Every second of the day, Americans rely on energy from oil and natural gas to maintain their daily lives. By taking advantage of advances in horizontal drilling and hydraulic fracturing techniques, energy companies are making unprecedented investments to develop unconventional oil and gas resources trapped within shale formations. The trend is expected to continue over the next 2 decades. By 2035, in fact, the oil and gas industry is expected to make more than $5.1 trillion in cumulative capital expenditures.1

Growth, of course, is good. However, this particular expansion could come at the expense of other construction sectors that are now experiencing their own recoveries and subsequent growth. The expansion could also impact the oil and gas industry, where the sector’s share of total workers continues to increase despite concurrent double-digit growth in the U.S. residential sector. This fact alone could put constraints on the rebirth of residential and commercial construction across the nation, as contractors scramble to fill positions—particularly in hot energy markets such as North Dakota, Pennsylvania, Texas, and Colorado, to name a few. Jerry Nevlud, President of the Associated General Contractors Houston chapter, stated, “The construction that’s anticipated to be built in the Houston area over the next few years is pretty impressive. Many subcontractors are going to have a hard time manning up the numbers to accommodate the volume of work projected.”3 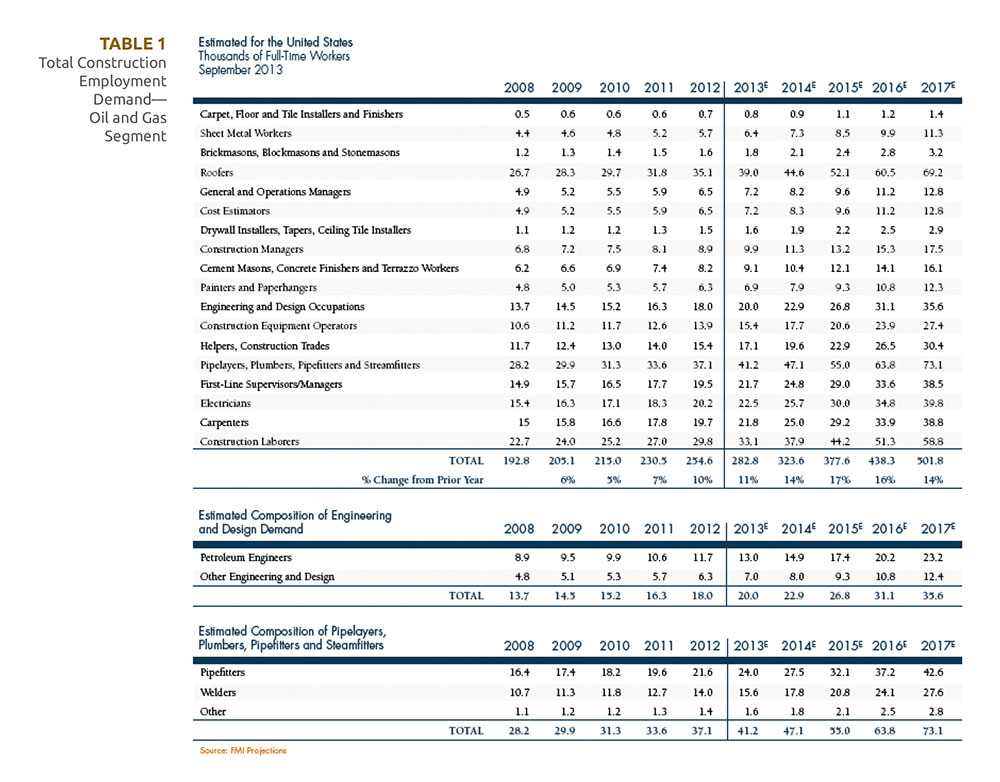 To compete effectively with the energy sector and to attract and retain new talent, contractors in other construction sectors must be prepared to offer competitive base salaries and implement effective incentive compensation programs that include higher bonus payouts. Consequently, owners will likely face rising construction costs and possible project delays as contractors struggle to staff their projects. Under this unprecedented labor pressure, industry participants must acknowledge that not all previous forms of labor models and business approaches will continue to be appropriate during these transformational times. The changing competitive landscape, combined with emerging technologies and ideas about how to ramp up and organize companies, has become a real force influencing today’s construction industry—particularly in the oil and gas sector. As such, we will likely see more union labor re-entering high-growth markets like the Gulf Coast area, just as owners scramble to get projects off the ground. As one industry executive points out, “There’s a reluctance on the part of the owners to bring back the unions into the market (in the Gulf Coast area), but that needs to be transcended with the pragmatic reality that you cannot get these facilities built all open-shop or all union. It’s going to take a combination of the 2.” As competition for limited resources intensifies, labor and talent management are quickly becoming key differentiators in company performance and value. Companies seeking to build a presence in the energy market need systems and processes in place that maximize productivity and retain top talent. As the energy sector continues to draw a larger share of the available construction labor force, contractors across all sectors will be forced to do the same.

North America leads the world in pipeline construction, with 41,810 miles of new or planned lines for oil and natural gas, according to Pipeline & Gas Journal’s “2013 Worldwide Construction Report.” For example, the newly completed southern leg of the Keystone Pipeline route (aka the Gulf Coast Pipeline) is now carrying over 700,000 barrels of oil daily from Cushing, Oklahoma, to Nederland, Texas. This new conduit is relieving what once was a significant bottleneck between oil produced in Oklahoma and refineries located on the Gulf Coast.

However, in other regions of the United States, such as the Eagle Ford, Bakken, and Marcellus formations, gas gathering, and pipeline infrastructure build-out is lagging up to 2 years behind well development—despite attractive pricing. According to a recent study commissioned by the Interstate Natural Gas Association of America (INGAA) Foundation, energy companies will need to invest $641 billion in midstream energy infrastructure through 2035 to keep up with growing oil and gas production.4

The largest share of regional midstream infrastructure investment is expected to occur in the Southwest (New Mexico, Texas, Oklahoma, Louisiana, and Arkansas) and will total more than$220 billion between 2014 and 2035.5 With midstream oil development infrastructure increasing in the region, and with more than half of the U.S. refineries situated there, investment in gas-related infrastructure is expected to increase too. The key drivers for this growth are continued expansion in gas production and load growth at petrochemical and liquefied natural gas (LNG) export facilities.

Canada, the Central United States, and the Northeast are also on track for significant growth in new midstream infrastructure—particularly gas-related infrastructure—to support the growing production of shale resources and facilitate pipeline transport to markets and export facilities. Concurrently, the abundant supply of low-cost and low-emission natural gas is expected to drive an accelerated decline of coal-fired generation plants combined with an increase of gas-fired generation plants. This trend will ultimately lead to more pipeline construction as well.

While pipelines move most U.S. crude oil, limited capacity is leading to growing competition from trucks, railroads, and barges throughout Canada and the United States. Between 2011 and 2013, the number of barrels of oil transported to U.S. oil refineries by rail, truck, and barge increased by almost 60%, with rail shipments increasing the most.6 By leveraging rail companies, producers can select target markets without worrying about long-term commitments to specific destinations. Should projects like Keystone XL, Northern Gateway, or Energy East pipeline not come to fruition, rail will become even more essential to the industry.

Oil and gas producers’ high demand on rail is also starting to affect other industries, including coal and agriculture. According to latest news reports, some power generators claim that they cannot stockpile enough coal for the coming winter due to freight slowdowns and backlogs.

In a recent Senate Committee Hearing on Commerce, Science, and Transportation, U.S. Department of Agriculture Deputy Administrator Arthur Neal testified that railroad service to grain shippers may not recover in time for the 2014 crops harvest. “Should this happen, grain elevators could run out of storage capacity, grain stored on the ground would run the risk of spoiling, and the costs of inadequate rail service would continue to accrue,” Mr. Neal stated.7

Traditionally centered in U.S. and Canadian hubs (e.g., Houston and Calgary, respectively), energy job growth is beginning to spread to second-tier energy hubs like Dallas, Fort Worth, Edmonton, Denver, and Pittsburgh, where strong economic activity is creating new opportunities for energy companies and causing a ripple effect across all construction sectors. The following provide examples of energy-related construction activity in the commercial and industrial sectors, specifically:

Commercial. Many of the shale-zone communities, such as the Bakken in North Dakota or Eagle Ford in Texas, are ill-equipped to accommodate the growing populations in these areas. For example, the average retail square footage per person in the United States is 23.8 square feet; that number is nearly 50% less (12.02 square feet) in North Dakota.8 Over the next 6 years, roughly $80 billion in annual investments—combined with rapid population expansion (and associated high spending capacity!)—is expected to spur the construction of local infrastructure and real estate development in these areas, turning small settlements into genuine boomtowns.

According to the Metro Denver Economic Development Corporation, the Niobrara region “serves as a hub for integrating traditional fossil energy and cleantech.”9 A good example is the proposed Niobrara Data Center Energy Park, a 662-acre micro-grid energy and technology park located in Weld County that will serve as a hub for cloud data centers, energy storage, renewable and fossil power generation, and multiple high-technology uses. These developments will create opportunities for new clusters to emerge, further driving local job growth and economic activity.

Meanwhile, investors have been tracking these industry changes too and secured $254 billion for commercial real estate construction and development starts during the first half of 2014. Projects include everything from Class A office space, to manufacturing facilities in energy hubs, to multifamily properties in thriving markets. Lenders are more than happy to oblige. Goldman Sachs, for instance, has “set its sights on construction and development lending,” according to Fortune, and has issued more than $500 million in construction loans in 2014 (up from just $50 million in 2013).

Industrial. The shale gale’s ripple effect is also influencing the industrial construction sector and driving construction of access roads, site preparation, storage ponds and pipes; petrochemical, power and steel plants; and fueling stations. Liquified Natural Gas (LNG) export terminals, both in the United States and Canada, are expanding too, “even though these projects dwarf the financial outlay and labor demands of all the midstream pipeline construction activity,” stated Mr. Daum.

As an example, federal regulators just approved plans for Dominion Resources’ $3.8 billion Cove Point LNG project in Calvert County, Maryland, the closest one to the Marcellus Shale region. Construction to convert the existing import terminal into an export facility is expected to begin in early 2015.

Cove Point is one of 4 LNG export projects to receive final approval. The other 3 include the Sabine Pass LNG Terminal in Cameron, Lousiana; the Cameron LNG project in Hackberry, Lousiana; and the FLEX/Freeport LNG project on Quintana Island in Texas. Meanwhile, 14 other projects are still awaiting federal approval, most of which will be located in the Gulf Coast area, in addition to a few projects in the Pacific Northwest. All combined, these activities and changes are further increasing the strains on labor capacity and affecting anticipated project costs. In some cases, large capital projects have already been delayed or canceled (see Shell’s Louisiana GTL plant as an example) due to rising costs and questionable long-term profitability projections.

With America’s natural gas prices hovering at historic lows, however, international companies such as South Africa-based Sasol, an integrated energy and chemical company, are moving in, despite the high risks associated with costs and labor availability. Sasol’s new $16 billion to $20 billion ethanol plant in Westlake (Lake Charles, Louisiana) is expected to start construction in late 2014.

While these new industrial construction projects are keeping thousands of construction and engineering companies afloat, a parallel construction boom is taking place and is being spurred by federal pipeline integrity and safety regulations to inspect, repair, or replace the aging transmission system. State and federal regulators alike are investigating pipeline systems and adopting cost-recovery strategies to help modernize and expand current facilities.

Government oversight will likely increase as the oil and gas industry continues to expand. This will create more opportunities for pipeline and engineering firms that specialize in design, operation, and corrosion control for gas transmission and distribution lines as well as liquid-petroleum pipelines.

A real energy revolution is underway. Led by increased production of both shale oil and shale gas, the United States is finally reversing an energy production decline that spanned more than 3 decades. With the demand for infrastructure expected to grow dramatically over the next decades, significant increases in midstream pipeline construction as well as expanded rail and road construction for energy transport are in store. Concurrently, each of these transportation segments will likely see more stringent laws and regulations around safety and environmental impacts, as infrastructure systems at the local, state, and national levels adapt to a new energy revolution.

At the same time, the U.S. oil and gas industry is on the brink of its largest human capital shortfall as it faces one of the most significant expansion periods in its history. Fierce competition for talent in this sector is already driving energy infrastructure construction firms to rethink their human capital needs and optimize access to—and retention of—qualified and experienced workers.

This perfect storm of sorts will present both challenges and opportunities for construction and engineering firms across a broad range of markets. By shoring up their stables of experienced, skilled workers now—rather than later—and exploring the various strategic opportunities that exist, firms will find themselves well equipped to tackle the oncoming challenges and to leverage extraordinary opportunities.