In 1931, S.S. Kistler developed the first aerogel by replacing the liquid phase in a gel with air to create a solid. The noteworthy aspect of this accomplishment was doing so without a reduction in the gel’s volume. Kistler had noted that capillary forces at the surface of the gel led to a collapse in the gel structure when gels dried at atmospheric pressure. Kistler’s challenge was to avoid this shrinkage. By mixing sodium silicate with water, Kistler formed a silica hydrogel as the sodium silicate reacted with the water to form a solid, nanoporous structure of polysilicic acid entraining the water. By rinsing with anhydrous methanol to eliminate the water, and subsequently raising the rinsed gel to temperatures and pressures above the critical point of methanol in an autoclave, the methanol was removed, cheating the natural capillary forces of evaporation and leaving a solid, nanoporous silica structure.

Aerogel exhibited unique physical properties. It was a solid composed almost entirely of air in its nanoporous structure, which made aerogel the world’s lightest solid with a very low thermal conductivity. Monolithic silca aerogel has a thermal conductivity of 0.017 W/mK. Commercial production of aerogel was limited over the following decades as long process times—weeks initially, then reduced to days—were impractical for industrial scale production. Capitalizing on aerogel’s low thermal conductivity would prove to be elusive. The physical properties of monolithic aerogel made the material a less than ideal insulation: it was both costly and fragile.

Twin technological advances beginning in the mid-1990s changed this. Advances in technology allowed drying times to be reduced from days to hours, significantly reducing the cost of manufacturing. In tandem, a commercial form of the aerogel in a flexible blanket was developed; aerogel was now available in a practical insulation form at a commercially-viable cost. 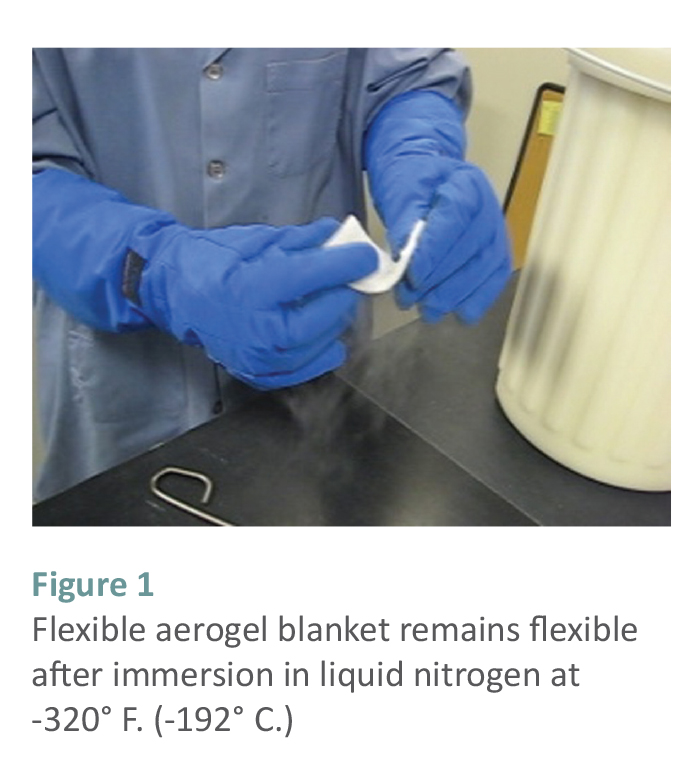 Aerogel insulation is available in 3 basic forms: block, particulate, and flexible blanket. In these diverse forms, aerogel applications can run a wide gamut, from the novel—such as in the Cernkov radiation detectors at the European Organization for Nuclear Research (CERN), in Switzerland; to micro-meteorite and cosmic dust collectors in space; to its application as thermal insulation on piping and equipment in refineries and petrochemical and gas plants.1 In block form, aerogels are currently being applied as thermal insulation in translucent windows and façade structures, allowing the passage of light while providing superior thermal and acoustic performance over modern double- or triple-paned windows. In granular or particulate form, aerogels are now in common use as additives in thermal coatings and in deep-water subsea pipe-in-pipe insulation. However, aerogel in its most widely applied form is found in flexible aerogel blankets.

Flexible aerogel blanket, as codified in ASTM C1728-13, Standard Specification for Flexible Aerogel Insulation, is manufactured for use in both hot and cold applications.2 Sales of aerogel blanket comprise the greatest part of all silica aerogel sales, with its share of this market exceeding 60% of the total. Globally, U.S. aerogel insulation manufacturers control the lion’s share of the aerogel insulation market, with a market share nearing 80% of total aerogel production.

Aerogel blanket, introduced to the industrial and building markets in the earlier part of this decade, has gained wide acceptance and is now used in these markets, particularly in the industrial sphere.

These benefits have led to adoption of the material in industrial markets: aerogel blanket insulation is in service in some of the largest global refiners and global petrochemical companies. These applications are found in piping as well as in equipment and tanks, including steam lines, reactors, asphalt and molten sulfur tanks, and coke drums to heat exchangers, flare lines, flue gas ducting, subsea pipelines, and many others. Sales of aerogel blanket materials have enjoyed consistent annual growth, both in the United States and overseas. This growth includes the use of aerogel blanket in cryogenic applications.

While cryogenic applications comprise only a small part of the industrial insulation market, insulating cryogenic piping and equipment presents particular technical challenges not seen in above- or below-ambient applications. The temperature threshold for cryogenic temperatures is generally accepted as being at or below -100° F. (-74° C), while absolute zero—the theoretical temperature at which molecular motion comes most closely to ceasing—marks the effective lower boundary at -460° F (-273° C).3 The extreme temperature differential (ΔT) between normal ambient conditions (T1) and piping and equipment (T2) operating at cryogenic temperatures presents 3 primary challenges to any insulation: extreme heat transfer requiring significant insulation thickness, strong vapor drive to the cold face, and significant contraction within the vessel or piping containing the cryogenic liquid. These performance demands limit the number of suitable insulation materials. Flexible aerogel blanket, however, is suited to match these challenges. 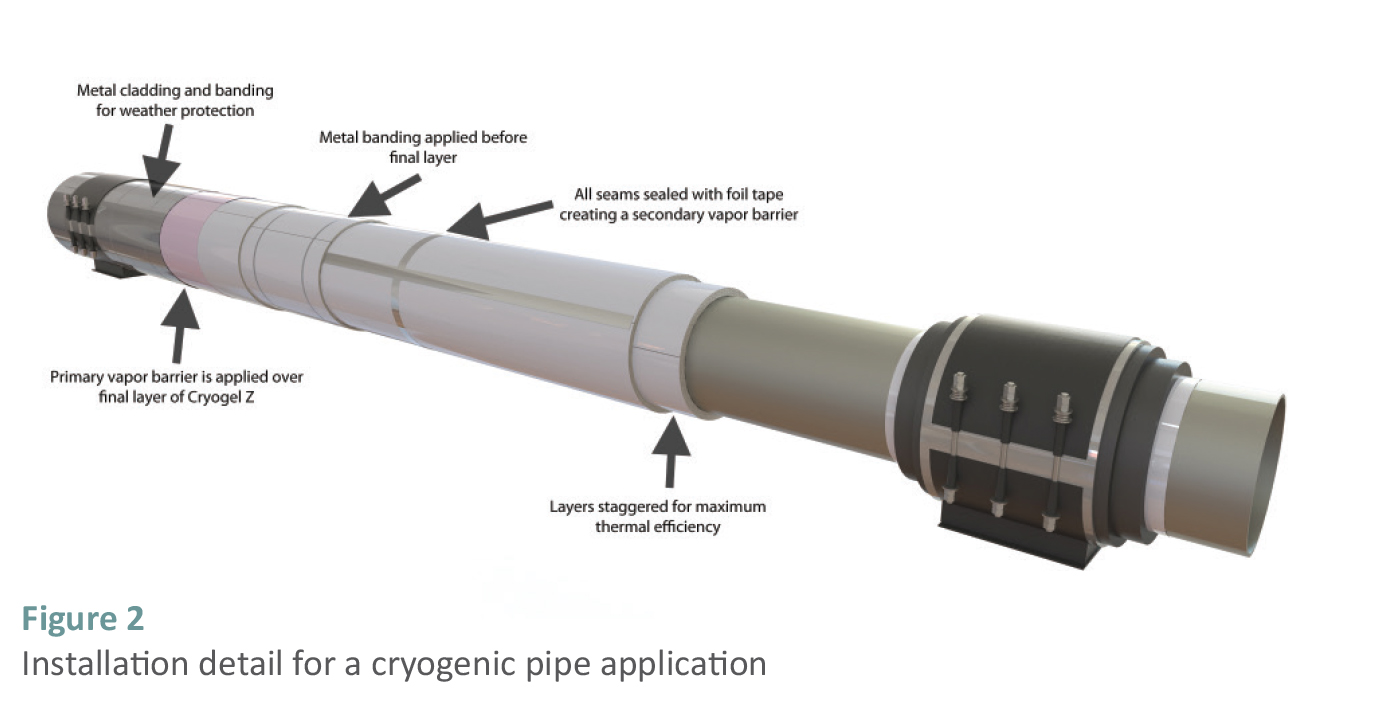 While aerogel blanket insulation is hydrophobic and does not allow the passage of liquid water at ambient pressure, it is water-vapor permeable. Vapor ingress is impeded by the integral vapor barrier membrane found on every blanket layer. Importantly, however, ice formation within the body of the aerogel blanket is inhibited by the unique nanoporous
structure of the aerogel. Silica aerogels are characterized by pore sizes between 5 and 100 nanometers (nm), with the pore diameter found within the aerogel structure of flexible aerogel blanket of approximately 12nm.4 To provide a sense of scale, one nanometer is one-one-millionth of a meter (10-9)—approximately the width of 10 carbon atoms, while the diameter of a single red blood cell is approximately 10-5 meters. A water molecule is approximately 0.29nm in diameter. The formation of ice crystals requires 275 water molecules, exceeding the pore diameter of the aerogel.5 There is too little space within the aerogel pores to permit the aggregation of sufficient water molecules to form an ice crystal. In the event of a breach in the insulation’s vapor barrier, ice formation consequently remains both localized and superficial. It is, in fact, this highly complex structure of nanopores that lends aerogel its low thermal conductivity. With pores that are roughly 5,000 times smaller than the cells found in polyisocyanurate foams or cellular glass, heat transfer is reduced.

Importantly for cryogenic applications, aerogel blanket insulation remains flexible at even the lowest cryogenic temperatures, down to -321° F. (-196° C). This unique property allows for the application of the aerogel blanket without contraction joints, eliminating both the considerable installation cost these imply, as well as the potential risk of vapor penetration and heat gain that these joints can carry in a cryogenic insulation system. The low relative glass-transition temperature of aerogel blanket—its ability to remain flexible at extremely low cryogenic temperatures—allows the material to accommodate thermal shock and provide considerable cryogenic splash protection. 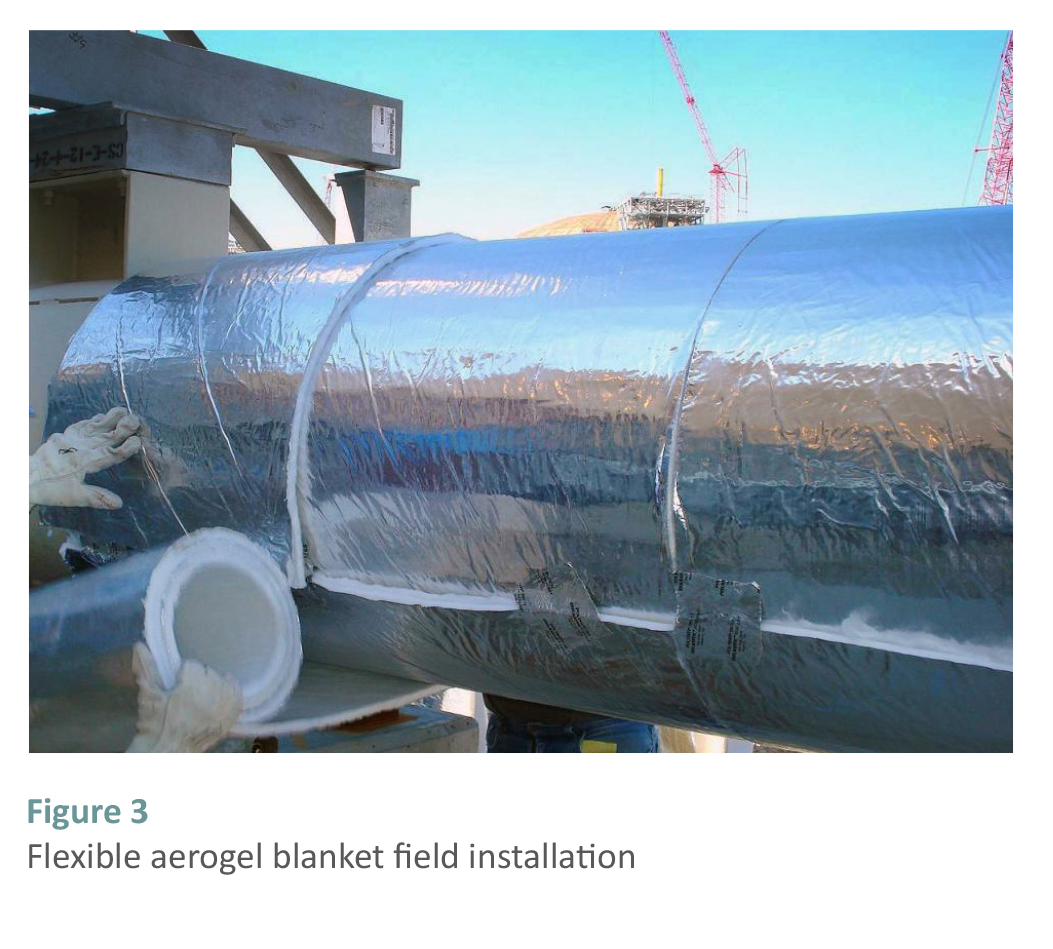 Installation on Cryogenic Piping and Equipment

Flexible aerogel insulation is commonly manufactured in thicknesses of 5 and 10mm. Multiple layers are applied to the pipe surface in a traditional “cigarette” wrap to reach the total required insulation thickness. To ensure that there are no through-joints in the insulation, the circumferential joints between the blanket sections are staggered. The aerogel blanket can be temporarily secured to the pipe surface with fiber-glass reinforced packing tape. When installing the blanket on larger or irregular surfaces, adhesive spray that is suitable for use on polystyrene is often used.

The aerogel blanket is supplied with an integral, factory-laminated vapor barrier membrane. This provides significant redundancy to the system as each layer includes this integral vapor barrier membrane. Interior layers of the blanket, closest to the pipe or equipment surface, are left unsealed where the interface temperature between the cryogenic pipe or equipment surface and the insulation is lower than the recommended service temperature of common industry adhesives and sealants. Once adequate layers have been applied to reach a projected interface temperature within the service range of the sealing tape, the integral vapor barrier membrane is sealed with foil-faced butyl tape to form the secondary vapor barrier membrane in the system. As noted above, contraction joints are not required. Vapor stops are applied at both sides of the pipe supports, isolating any potential breach of the system. A primary vapor barrier, such as a foil-faced butyl rubber, is then installed, followed by mechanical protection jacketing such as aluminum or stainless steel with banding, or non-metallic systems such as glass reinforced plastic (GRP).

The installation of flexible aerogel blanket on cryogenic piping and equipment is fairly simple.

In some situations, installation man-hours can be significantly lower when compared to conventional rigid insulation. 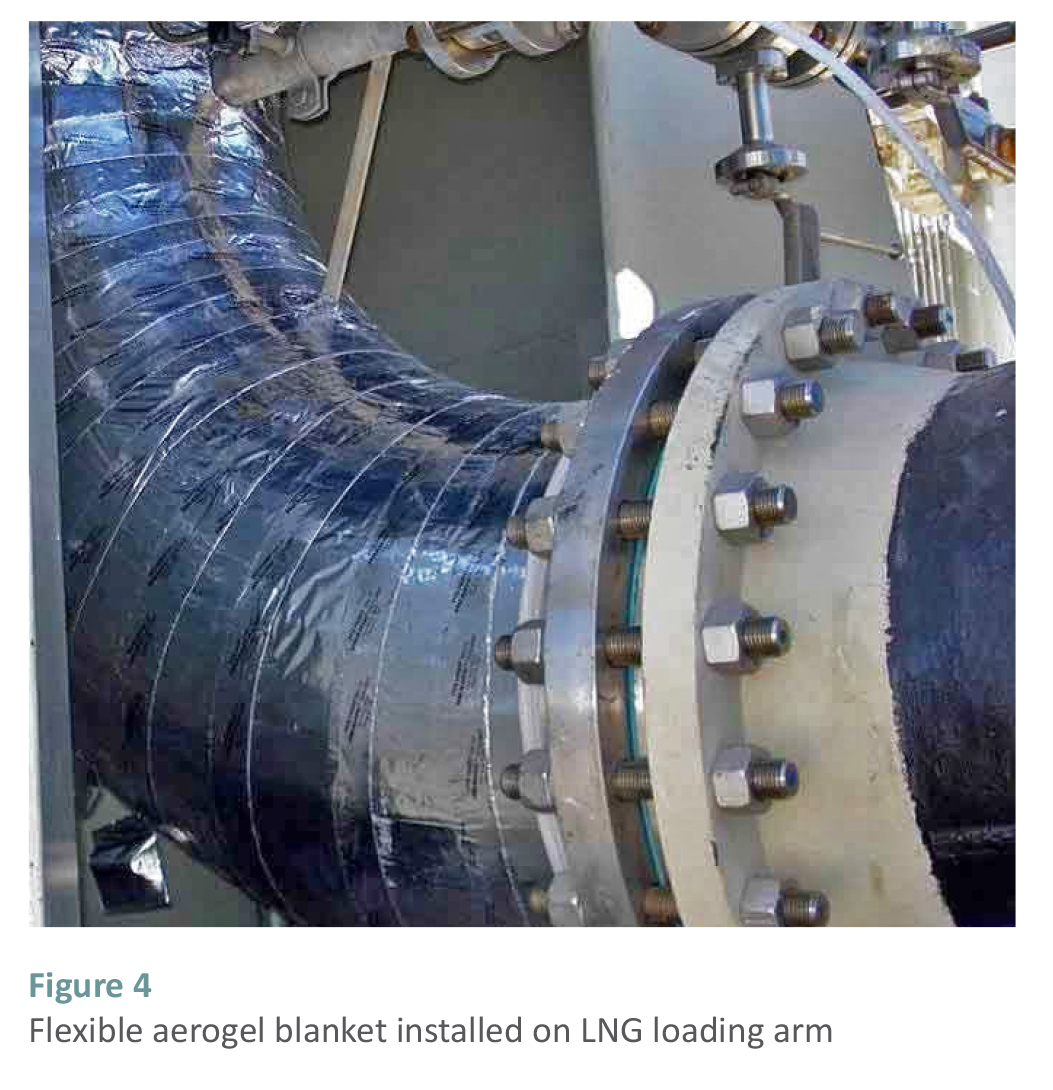 Aerogel blanket insulation has been utilized in a number of cryogenic applications, predominantly in certain portions of LNG service. LNG facilities, either as liquefaction (export) or regasification (import) terminals, operate primarily at -265°F (-165°C) and are the largest cryogenic plants.

Aerogel insulation is well known for its low thermal conductivity. The same nanoporous structure of aerogel that inhibits the transfer of heat also lends the material Passive Fire Protection (PFP) and acoustic properties. Aerogel insulation provides good performance in both pool-fire and jet-fire protection in applied thicknesses. In cryogenic applications,
and on facilities of restricted site footprints, aerogel insulation can satisfy demanding PFP requirements, often with the same total insulation thickness specified for condensation control. Aerogel blanket with a total installed thickness of 80mm, a common thickness for condensation control seen in LNG service, can provide more than 2½ hours of pool-fire
protection (UL 1709), and 60 minutes of jet-fire protection. This has become an important consideration in LNG facilities where NFPA 59A guidelines require minimum easements between storage and process areas. In situations where there may be limited space, such as in expansions or conversions of existing facilities, or in offshore or near-shore facilities, the ability of the insulation to provide the necessary PFP can be pivotal to the success of the project. Similarly, the underlying physical structure of silica aerogel provides flexible aerogel blanket with considerable acoustic benefits. With the addition of mass-loaded vinyl (MLV) aerogel blanket, aerogel can meet the requirements of ISO 15665 classes A, B, and C, as well as the more demanding “Shell D” insertion loss requirement. This can typically be accomplished with the same total insulation thickness specified for condensation control in cryogenic service. Thus, aerogel blanket insulation can uniquely provide combined thermal, acoustic, and PFP in a single application.

Insulating piping and equipment for cryogenic service can be complex and time consuming, requiring a level of experience not required in cold- or above-ambient applications. As oil and gas exploration and production moves to more remote locations and offshore fields, ease of installation and logistics becomes increasingly more important. The blanket format of aerogel insulation provides for a fairly simple installation, reducing the impact of qualified labor shortages in remote locations. Logistics are also simplified as aerogels are durable during tavel. Aerogel blanket is manufactured and packaged in rolls from which any diameter can be cut. Insulation for piping, equipment, valves, and other fittings can be fabricated on the jobsite from a single role. This both simplifies the supply chain, and allows for irregular and atypical fittings to be quickly completed on site.

Silica aerogels have a number of unique physical properties—perhaps most important is the lowest thermal conductivity of any solid. Recent technological advances have allowed this unique material to be produced in the more practical and economical form of a flexible blanket. While the properties of aerogel blankets are now known, and the product can be found in hot applications around the world, its use in cryogenic applications is still growing. The low thermal conductivity of aerogel blanket may allow for reduced installed thicknesses, which can eliminate clashes in tight spaces where pipes are placed too close together. Easy and rapid installation; space savings; simplified logistics; and the possibility
of achieving combined thermal, acoustic, and PFP in a single material and application are among its advantages.