March 23, 2011, was the 1-year anniversary of the Patient Protection and Affordable Care Act, better known as health care reform. Despite having lived with this monumental legislation for more than a year, there still seem to be more questions than answers. This article addresses some of those questions.

How We Got Here

To begin to understand health care reform, one must first understand the “why.” Our country has struggled with this issue for a very long time. In 1912, President Theodore Roosevelt was the first to campaign on a platform that promised national health insurance. He was defeated by Woodrow Wilson.1 Efforts to improve on or create a national health care system were called for again in 1932 by the Committee on the Cost of Medical Care, in 1934 by President Franklin Roosevelt’s New Deal, by President Harry Truman in 1945, in 1962 by President John F. Kennedy, in 1972 in the Nixon/Kennedy debates, and later by the Carter, Reagan, and Clinton administrations.

But one really only needs to look back over the past 10 to 20 years to understand the need. In 1999, the average premium for small firms was $6,683. In 2009, it had grown to nearly $13,000.2 Over that same period, employees’ earnings grew 37 percent, while employee health care costs grew 137 percent.3 We have achieved what has been called an “affordability gap.”

What caused this disparity? The factors are numerous. The U.S. government spent $2.3 trillion on health care in 2009, more than three times the $714 billion spent in 1990, according to the Kaiser Family Foundation.

It’s generally accepted that medical technology and innovation have been a driver. Not only have the types and variety of medical and pharmaceutical services increased dramatically, but so has patients’ ability to learn about and access these technologies.

Administrative inefficiencies have been cited. The current system suffers from a lack of coordination—for example, each payer generally has its own billing system. This is further aggravated by a payment system that tends to pay by tests or exams ordered instead of the outcomes achieved.

Health insurance mandates make an impact. A mandated benefit is a law that requires a health insurance company or policy to cover specific providers, procedures, benefits, or people. The Council for Affordable Health Insurance estimates that mandates can increase the cost of an insurance policy from 10 to 50 percent.

Other factors often recognized include our aging population and cost shifting from public to private payers and from the uninsured to the insured. The legal environment contributes in the form of rising medical malpractice premiums.

All things considered, however, perhaps the best indicator of what may be driving health care cost increases is the negative trend in certain health indicators over the last 20 years, including the following.

Only 64 percent of employers offer health benefits to their employees. (This can be as low as 39 percent for employers who have many lower-wage or part-time workers.)5 In 2010, the Census Bureau estimated that more than 50 million Americans are uninsured. There was a significant increase over the last couple of years, which is blamed on rising costs, the recession, companies dropping employee health insurance benefits, and families going without coverage to cut costs.

Many who find themselves uninsured have access to some form of safety net. Generally referred to as risk pools, these programs allow individuals denied coverage by private insurance companies to access state-sponsored health insurance plans—albeit at a higher cost than if they were able to qualify for a private plan. Currently, 34 states offer some form of risk pool, and these risk pools cover about 183,000 people.

Risk pools come in a variety of forms. They can be a temporary stopping point for individuals who are denied health coverage, or they can be a catch-all for those who have no other way to purchase insurance. Some risk pools have done an excellent job of providing alternatives, while others have done very little because their health insurance plans are not designed well, are not funded properly by their states, or are simply unaffordable.

Summing It All Up

The Kaiser Family Foundation has estimated that by 2019 family premiums will cost between $24,000 to $30,000. When you take all this into consideration—the rising costs, the negative health indicators, the decreasing numbers of employers offering health insurance, the rising uninsured population, the inconsistent success of risk pools, etc.—it leads to only one conclusion: We had a problem.

Where We Are Today

Health care reform is really a combination of two pieces of legislation: the Patient Protection and Affordable Care Act passed on March 23, 2010, and the Health Care and Education Reconciliation Act of 2010, passed March 30, 2010. The signed legislation contained over 2,400 pages before clarifications, rulings, or determinations were made by the various governmental departments tasked with defining and enforcing it.

Some features of health care reform should already be familiar, as many have already gone into effect. Others may or may not apply, depending on whether one has “grandfathered” status.

What is a Grandfathered Plan?

Health care reform covers a scope of topics that far exceeds what the media covers. That scope also exceeds what is practical to include in this article. The Kaiser Family Foundation has created an interactive tool designed to explain how and when all provisions of the law will be implemented at http://healthreform.kff.org/timeline.aspx.

Below is a brief outline of the topics and provisions implemented or scheduled each year. Topics that may be of interest to the business community include:

High-cost plan excise tax: A 40 percent excise tax is to be imposed on the excess benefit of high-cost employer-sponsored health insurance. This is also known as a “Cadillac tax.”

Regardless of how one feels about health care reform or the politics behind it, it is being implemented. Over the next couple of years, it will achieve momentum that will be difficult to stop. This author’s prediction of what tomorrow may bring includes the following. Health care reform:

There are several onerous conflicts built into the legislation. For example, insurance companies will be required to offer insurance to all people regardless of pre-existing conditions. This works when everyone has coverage, yet the individual mandate is riddled with exclusions and lacks strength—as well as facing significant legal challenges in the courts.

These types of conflicts, and the sheer size and scope of this legislation, makes one wonder if it is all achievable. While the bill was focused on increasing the number of insured lives, the question is whether the cost and administrative burden it creates will exceed its benefits.

To stay informed, this author suggests one or more of the following:

Finally, if it’s all just too much, take the path less traveled. Go be healthy. Perhaps if we had all done that in the first place, none of this would have been necessary. 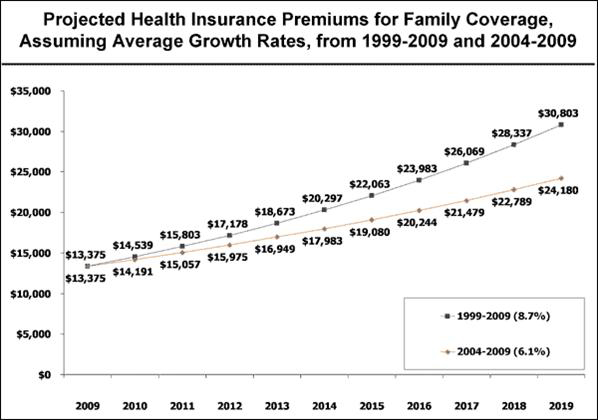