Here Are the Codes You Need for Metal Building Envelope Projects

The metal building industry has witnessed a tremendous shift over the last several years, and code adoption certainly did not slow down during the COVID-19 pandemic. Here is a review of some of the metal building energy code basics before we dive into the important updates you should know. 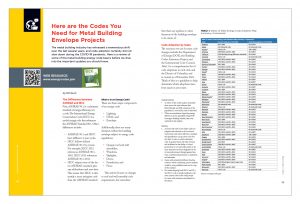 First, ASHRAE 90.1 is a minimum standard of energy efficiency, not a code. The International Energy Conservation Code (IECC) is a model energy code that references the ASHRAE Standard 90.1. Other differences include:

What Is in an Energy Code?

There are three major components of an energy code:

Additionally, there are many elements within the building envelope subject to energy code regulations:

This article focuses on changes to roof and wall assembly code requirements, but remember that there are updates to other elements of the building envelope to be aware of.

The resources we use for state code changes include the Department of Energy (DOE), the Building Codes Assistance Project, and the International Code Council. Table 1 is a comprehensive list of code adoptions in each state and the District of Columbia, and is current as of December 2021. Think of this as a guideline to help determine which adoptions have been made in your state. 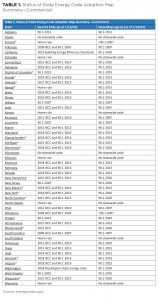 Table Notes:
* A review of the codes in place in jurisdictions across the state indicates that
86% (Hawaii) and 82% (Arizona) of the population is covered by codes at this level.
^ When an amendment impacting energy efficiency can be quantified using DOE Prototype Building Models, they were captured in the analysis.

Notes:
1. A home rule state is one where codes are adopted and enforced at the local level. Some home rule states will have a mandate that jurisdictions can go above code but also have to meet a certain minimum code. In general terms, the idea of home rule is defined as the ability of a local government to act and make policy in all areas that have not been designated to be of statewide interest through general law, state constitutional provisions, or initiatives and referenda.
2. States with extensively different baseline codes for which conducting custom analysis would be cost prohibitive and out of scope of this analysis.
3. For states adopting both IECC and 90.1, the IECC code is usually analyzed as the state current code in this study, except for states with extensive amendments to the IECC.

In terms of updates, you can expect to see the majority of changes in air sealing and blower door testing. Additionally, there is a reduced BTU table for semi-heated space. This means that the maximum allowable heat output per climate zone has been reduced, thus making the semi-heated compliance path more difficult to use. Remember that these comparisons are based on IECC 2015/ASHRAE 90.1-2013. Many changes found in IECC 2021/ASHRAE 90.1 2019 concern mechanical systems and lighting. Additionally, commercial buildings will require EV-capable or ready charging stations. 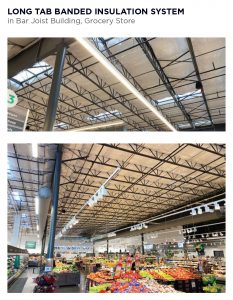 As you probably noted in Table 1, the most widely adopted code cycle is IECC 2015 and ASHRAE 90.1-2013. If your current state’s code is based on the IECC 2009/ASHRAE 90.1 2007 Standard, you will see the most significant jump in envelope changes. Many states currently at the IECC 2009 code are bypassing IECC 2012 altogether (or have already done so) and adopting IECC 2015. Pennsylvania and South Carolina are examples of this. On October 1, 2018, Pennsylvania changed from IECC 2009/ASHRAE 90.1-2007 to the IECC 2015/ASHRAE 90.1 2013 code. South Carolina did the same as of January 1, 2019. This is a huge jump, and many metal building contractors will feel the pressure. If you have not used liner systems or filled cavity/long tab banded systems in the past, you will need to start using them. Both options fulfill the metal building insulation requirements—it is just a matter of preference. Key differences between the systems are detailed later on in this article.

Higher insulation values: IECC 2015 and ASHRAE 90.1-2013 have the most stringent envelope requirements based on “Conditioned Space” and “Non-Residential Space” (see Table 2). The newest code, IECC 2021 and ASHRAE 2019, reflect these values. 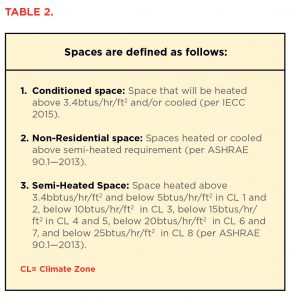 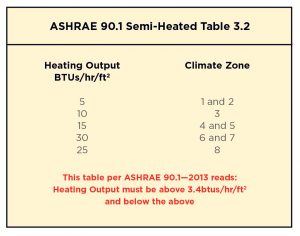 If semi-heated is not allowed, based on the heating system or jurisdiction, then each climate zone will have major increases in thermal performance, which translates to increased insulation levels under the non-residential space. This is based on ASHRAE 90.1-2013; however, the IECC 2015 code has the same values, for the most part. For example, using ASHRAE 90.1-2013, climate zone 5a requires a roof U-value of .037 and a wall U-value of .050. In order to obtain these U-values, a metal building would require either a liner system or filled cavity/long tab banded system for the roof, and a liner system filled cavity for the walls. Other options include insulated metal panels and board insulation with R-values comparable to the U‑values noted above.

As previously noted, of some changes to semi-heated space, see the new Table 3.2 published in ASHRAE 90.1-2016. 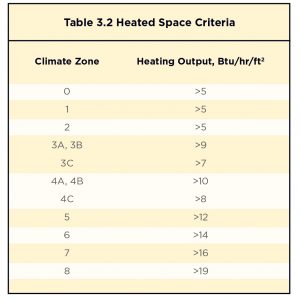 Air barrier requirement: Both IECC 2015 and ASHRAE 90.1-2013 require an air barrier in the thermal envelope, and for it to be indicated in drawings. It can be placed on the interior side, exterior side, somewhere within assemblies composing the envelope, or any combination thereof.

It is also mandatory to identify the air barrier, and for it be continuous across joints and assemblies. Joints and seams must be sealed and securely installed. Penetrations and joints—and seals associated with penetrations—must be sealed in a manner compatible with construction material and location. These must be shown on the drawings submitted for permitting.

Compliance path: Under the IECC 2015 Code and ASHRAE 90.1-2013, it is still the same choice. The designer decides to follow one of three paths: materials, assembly, or whole building. The materials path is just that—any material tested under ASTM E2178. Assembly is a combination of envelope materials built and tested under ASTM E2157, 1677,
or 283. Whole building testing requires ASTM E779. If this option is used, and the building fails, it must be brought in compliance with the leakage rate allowed. This means that you cannot opt out of this path once it is chosen by the designer. ASHRAE 90.1-2013 does allow a lesser leakage rate if repairs are made.

States that have adopted IECC 2015/ASHRAE 90.1-2013 include: Alabama, California (where it is known as Title 24), Illinois, Maryland, Massachusetts, Michigan, New Jersey (adopted ASHRAE 90.1-2013), New York, Oregon, Utah, Texas, Vermont (state-specific code modeled after IECC 2015 and, in some cases, IECC 2021), and Washington. Georgia is also slated to adopt the code cycle over the next few months. Many changes happen on January 1st of the new year, in addition to June and July.

The Biggest Question to Answer in 2022: “What Do I Need to Meet Code?”

As we move toward more complexity in each code cycle, this longstanding question will only become more common. As simple as the question is, it is very difficult to answer. In short, the compliance path I recommend most often is the prescriptive approach. Per the U.S. DOE, the prescriptive approach includes “requirements that either must be met by every building design, or if the requirement is not met, a tradeoff must be made to make up for not meeting that requirement.” In other words, you must meet all U-values of the roof, walls, foundation, and fenestrations. If a tradeoff is indeed needed in the end, the quoted price has covered any changes.

Some other areas of building envelope I have had to address come from the IBC (International Building Code)—more specifically, the structural code. The important section to review is Section 1402.2: Weather Protection, which covers weather-resistive barriers in exterior walls. If the metal building wall panel supplier has not tested its panels per ASTM E331, compliance can be difficult. ASTM E331 is the exemption for having to create a wall cavity designed with flashings and a means for draining water that enters the assembly.

In closing, the code cycle changes that are either here or coming soon to your state are, without a doubt, challenging to say the least. Insulation suppliers located throughout the country have had to attend meetings, learn, and be involved with the entire process of code development to ensure our customers are providing code-compliant envelopes to their customers and, on a bigger level, the metal building industry. Overall, it has been a good year for metal building construction. The newest code changes mean more efficient buildings and more innovative solutions that have greater potential to save end users money.