If Your Coworkers Are “Quiet Quitting,” Here’s What that Means

Some Gen Z Professionals Are Saying No to Hustle Culture: “I’m Not Going to Go Extra” 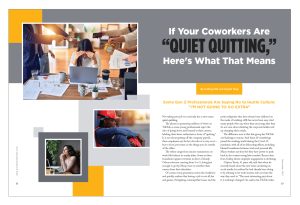 Not taking your job too seriously has a new name: quiet quitting.

The phrase is generating millions of views on TikTok, as some young professionals reject the idea of going above and beyond in their careers, labeling their lesser enthusiasm a form of “quitting.” It is not about getting off the company payroll, these employees say. In fact, the idea is to stay on it—but to focus your time on the things you do outside of the office.

The videos range from sincere ruminations on work-life balance to snarky jokes. Some set firm boundaries against overtime in favor of family. Others advocate coasting from 9 to 5, doing just enough to get by. Many want to untether their careers from their identities.

Of course, every generation enters the workforce and quickly realizes that having a job is not all fun and games. Navigating contemptible bosses and the petty indignities that have always been inflicted on the ranks of working stiffs has never been easy. And many people who say, when they are young, that they do not care about climbing the corporate ladder end up changing their minds.

The difference now is that this group has TikTok and hashtags to emote. And these 20-somethings joined the working world during the Covid-19 pandemic, with all of its dislocating effects, including blurred boundaries between work and personal life. Many workers say they feel they have power to push back in the current strong labor market. Recent data from Gallup shows employee engagement is declining.

Clayton Farris, 41 years old, said that when he recently heard about the new term circulating on social media, he realized he had already been doing it by refusing to let work worries rule over him the way they used to. “The most interesting part about
it is nothing’s changed,” he said in his TikTok video. “I still work just as hard. I still get just as much accomplished. I just don’t stress and internally rip myself to shreds.”

Across generations, U.S. employee engagement is falling, according to survey data from Gallup, but Gen Z and younger millennials, born in 1989 and after, reported the lowest engagement of all during the first quarter, at 31%.

Jim Harter, Chief Scientist for Gallup’s workplace and well-being research, said workers’ descriptions of “quiet quitting” align with a large group of survey respondents that he classifies as “not engaged”—those who will show up to work and do the minimum required but not much else. More than half of workers surveyed by Gallup who were born after 1989—54%—fall into this category.

One factor Gallup uses to measure engagement is whether people feel their work has purpose. Younger employees report they do not feel that way, the data show. These are the people who are more likely to work passively and look out for themselves over their employers, Dr. Harter said.

Paige West, 24, said she stopped overextending herself at a former position as a Transportation Analyst in Washington, D.C., less than a year into the job. Work stress had gotten so intense that, she said, her hair was falling out and she could not sleep. While looking for a new role, she no longer worked beyond 40 hours each week, did not sign up for extra training, and stopped trying to socialize with colleagues.

“I took a step back and said, ‘I’m just going to work the hours I’m supposed to work, that I’m really getting paid to work,’” she said. “Besides that, I’m not going to go extra.”

Ms. West said that she found herself more engaged during meetings once she stopped trying so hard, and she received more positive feedback. She left the job last year and is now a full-time freelance Virtual Assistant making about 75% of her previous salary. She adjusted by moving back to her home state of Florida.

Zaid Khan, a 24-year-old Engineer in New York, posted a quiet-quitting video that racked up 3 million views in 2 weeks. In his viral TikTok, Mr. Khan explained the concept this way: “You’re quitting the idea of going above and beyond… You’re no longer subscribing to the hustle-culture mentality that work has to be your life,” he said. Mr. Khan says he and many of his peers reject the idea that productivity trumps all; they do not see the payoff.

Some online commenters pledged to relax on social media when they had downtime at work. Others say they will follow their job descriptions to the letter, instead of asking for additional assignments.

A new crop of quiet-quitting videos is starting to pop up, denouncing the move as a cop-out, not a cure-all for burnout or discontentment at work.

People who coast have been fixtures of the office for decades, but many of today’s less-invested employees have been able to skate by thanks to remote work, said Elise Freedman, a Senior Client Partner at consulting firm Korn Ferry.

If the economy sours, Ms. Freedman said, less-engaged workers may be more at risk of layoffs. “It’s perfectly appropriate that we expect our employees to give their all,” she said.

Josh Bittinger, a 32-year-old Market-Research Director at a management consulting company, said people who stumble on the phrase “quiet quitting” may assume it encourages people to be lazy, when it actually reminds them to not work to the point of burnout. After years of saying “yes” to everything, in hopes of standing out, Mr. Bittinger said he has learned to say “no” more, reserves evenings for himself, and avoids checking email on vacation. “I get my job done, my projects done. I’m performing well, and I get good feedback,” he said. “And I’m able to still take time to just step away from everything.”