Improvements in Water Vapor Retarder Jacketing for Use Over Mechanical Insulation

In the last decade, there have been several
developments in water vapor retarder jacketing designed for use over insulated
pipes, ducts, and equipment. In most cases, these developments have improved
jacketing by providing lower permeance to water vapor, tighter sealing of
joints, greater strength, and improved appearance. While there have been some
improvements on new types of indoor-only jacketing, there is also a whole new
category of jacketing designed for outdoor use.

To start, we need to define “water vapor retarder”
and “jacketing.” ASTM C168 gives this definition for the former:

Water vapor retarders are used
to limit the rate of water vapor migration from the ambient to a below ambient
surface. This is depicted in Figure 1.

A water vapor retarder may or
not include a separate protective jacket. However, for insulation materials
with high vapor permeability, there must be a continuous, tightly sealed vapor
retarder surrounding the insulation. As long as the pipe remains cold and the
environment is warm and humid, a vapor pressure difference will exist between
the environment and the pipe surface.

Jacket, or jacketing, exists in
different forms, as shown in the photos in Figures 2 and 3.

One reason for the development of new water vapor
retarders is the incidence of insulation systems failing on below ambient pipe
equipment in unconditioned buildings. This is a particular problem in locations
where the climate tends to be hot and humid. When a failure occurs on a below
ambient system with a sheet type of vapor retarder, it is likely due to at
least one of the following failure mechanisms:

Figures 4 through 7 show
photographs of some of these problems.

While ASJ can be a good vapor
retarder, it is important that it be used in building spaces that are
conditioned and maintain low absolute humidity levels. Photos 4 through 7,
showing failed CHW insulation systems, were all taken in spaces that were
unconditioned most or all of the time. ASJ usually covers fiberglass or
phenolic foam pipe insulation, all of which have sufficiently high vapor
permeability values that they require a separate, continuous, tightly sealed
vapor retarder for successful performance.

Failures commonly encountered usually involve either unprotected,
traditional ASJ, or ASJ covered with unsealed polyvinyl chloride (PVC) in
unconditioned spaces in buildings located in hot and humid climates. There is
evidence that continuously sealed PVC jacket (either with solvent or PSA tape)
can significantly improve the vapor performance of ASJ in such applications.
Sealed PVC, installed over traditional ASJ, provides 3 major advantages over
exposed traditional ASJ: (1) lower system permeance, (2) water resistance, and
(3) physical protection. However, when the PVC is not continuously sealed in
these applications, that PVC jacketed system, on top of traditional ASJ, also
frequently fails in unconditioned spaces such as mechanical rooms and central
CHW plants.

Furthermore, in mechanical
rooms of buildings, traditional ASJ is frequently exposed to physical abuse,
including dripping or spraying water, which further shortens its life. It is likely
that exposed, traditional ASJ will not last long in a mechanical room
environment due to expected physical exposure. In any unconditioned space,
traditional ASJ does not perform well unless covered with a continuously sealed
PVC jacket. The results of research currently being conducted at Oklahoma State
University for ASHRAE Technical Committee 1.8 as Research Project RP-1646
should soon provide data to clarify some of these performance issues.

Traditional indoor vapor retarders have been
addressed by ASTM specification C1136. These include ASJ, foil-scrim-kraft
(FSK), metalized polyethylene teraphthalate (MPET), and polyvinylidene chloride
(PVdC) materials. PVC jacket is not covered by C1136. Last year, ASTM added a
new Type IX material that is rated as having a water vapor permeance of 0.00
perm (meaning test results by ASTM E96 yield a permeance < 0.005 perm).
Figure 8 shows performance values of the recently updated C1136-12, with the
new Type IX shown in red in the last column.

Examining these values, it is apparent that this new ASTM C1136 Type IX
vapor retarder also has greater burst strength than the other vapor retarders,
and it has an average tensile strength. This material has a permeance of 0.00
perm because its composition includes aluminum foil with a thickness of at
least 0.001 inch (1 mil), which is at least 3 times thicker than the foil used
in traditional ASJ. An additional feature is that its composition includes no
exposed paper.

There is also a category of new
vapor retarders for use outdoors. Two specifications are under development at
ASTM Committee C16: one for a new product called “laminate protective jacket
and tape,” and another for a product called “modified asphalt jacket.” While
these are not always used as vapor retarders, like the ones covered by ASTM
C1136, all are rated as having a permeance of 0.00 perms. In addition, they are
much stronger than the Type IX vapor retarders, having burst strengths up to
400 pounds per square inch (psi) (compared to 70 psi for the C1136 materials)
and tensile strengths up to 150 psi (compared to 45 psi for the C1136
materials). While all are available with an aluminum finish, either smooth or
embossed, some are also available in different colors such as white, black, and
gray. Figures 9 through 12 show photos of these type materials in various
applications.

Achieving a
successful performance from a vapor retarder systems made with these or other
materials requires the following:

Figures 13 and 14 show some of
the steps for sealing pipe or cylindrical duct insulation jacketing using
compatible tape with a pressure sensitive adhesive (PSA).

On insulated ducts, laminate
protective jacket and tape can be used to weatherize the insulation system and,
in the process, provide a vapor tight seal. Figures 15 and 16 show installation
details.

Removable and Reusable Insulation for Components

With the availability of the ASTM C1136 Type IX
vapor retarder and tape, both of which
include a PSA, it is now possible to make and apply a removable/reusable
insulation system on pipe system components in mechanical rooms. Sometimes
these components (butterfly valves, flange pairs, vibration
isolators, etc.) were insulated during construction, but when one of the
fittings leaks, mechanical maintenance personnel might cut off the insulation
and discard it to replace the leaking gasket or vibration isolator. The
individual replacing the parts may not reinsulate the components. In other
cases, these components were never insulated in the first place. Regardless,
the penalty for having no insulation on these components is energy waste and,
at least during much of the year, excessive condensation and subsequent
corrosion of the metal surfaces.

Using a special insulation kit
made with a continuous vapor retarder on both sides of a flexible blanket, and
with matching PSA and vapor retarder tape, custom shapes can be made by the insulation
craft laborers in the field and then installed on previously bare components.
When future removal is required for mechanical maintenance, some of the tape
can be removed, the insulation removed, the maintenance performed, and the
insulation then reinstalled (preferably by skilled insulation craft laborers)
using fresh tape. This saves time and money and reduces damage to the
insulation system. Figures 17 and 18 show before and after photos using this
type of kit made using an ASTM C1136 Type IX vapor retarder.

Some in the insulation industry
have objected to the less trim and consistent appearance of removable/reusable
kit insulation after installation. In its defense, the traditional appearance
is sacrificed to achieve removability and reusability, features that allow for
mechanical maintenance without damage to the system, reuse of the mechanical
insulation materials each time they are removed, and an insulation system that
can be tightly sealed against water vapor intrusion. However, there are other
product options available for components, including valves. The most important
thing is to insulate the whole system. Figures 19 and 20 show some of these
possibilities.

With the recent development of very low permeance
vapor retarders, new options have emerged for jacketing insulation systems.
These new materials have been designed for both indoor and outdoor use. All
have a permeance of 0.00 perm, and most are stronger—some much stronger—than
traditional vapor retarders. Many are available with pressure-sensitive
adhesives, and all have compatible tape with a PSA. It is now common to see
outdoor, insulated ducts with these new vapor retarders, and sometimes outdoor
insulated pipe and equipment. The use of the new ASTM C1136 Type IX vapor retarders,
with PSA tape, allows for tightly sealing the vapor retarder systems. This
material has also allowed for the development of a kit for making
removable/reusable insulation blankets for use on CHW mechanical room
components. 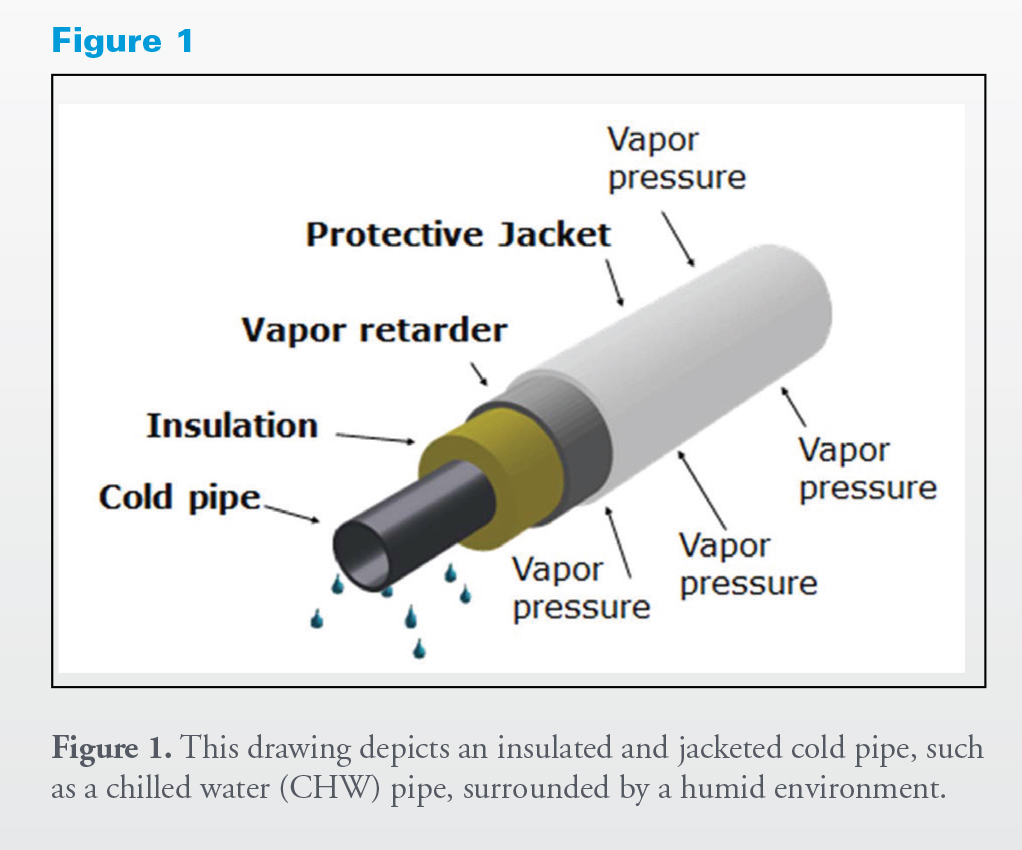 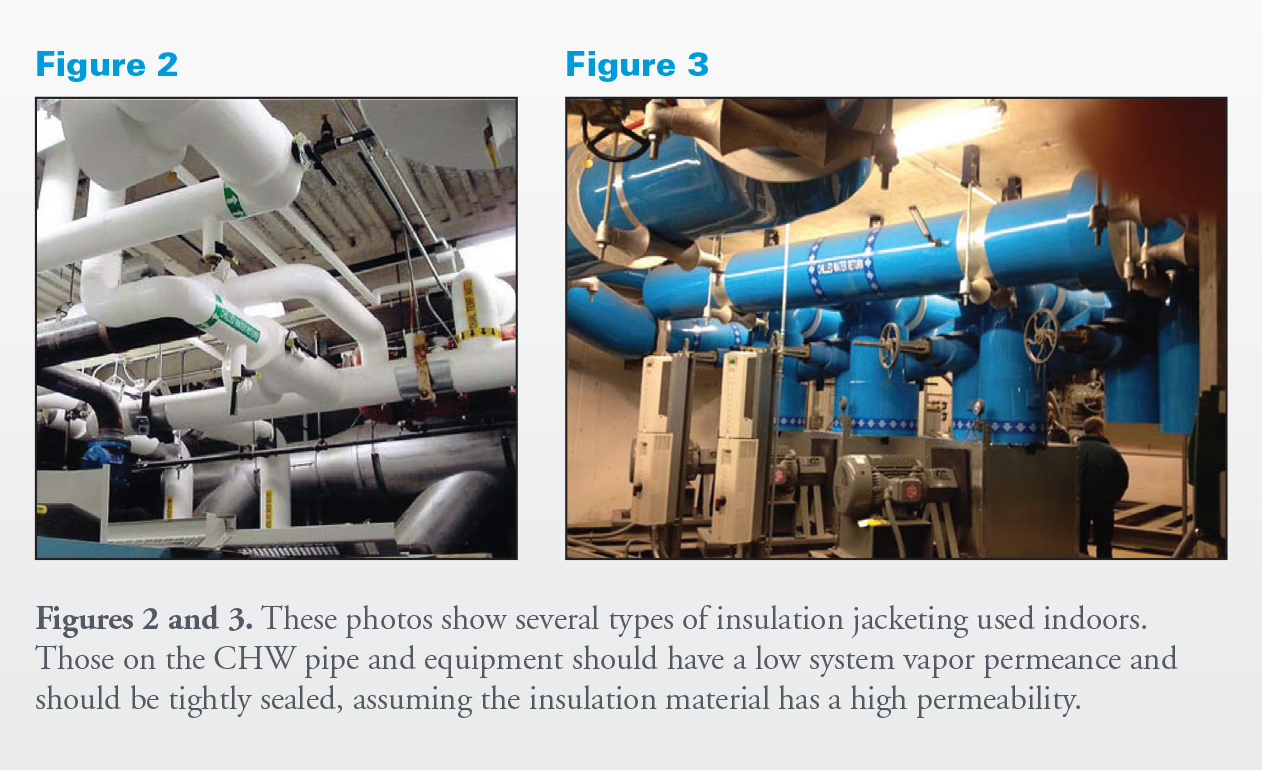 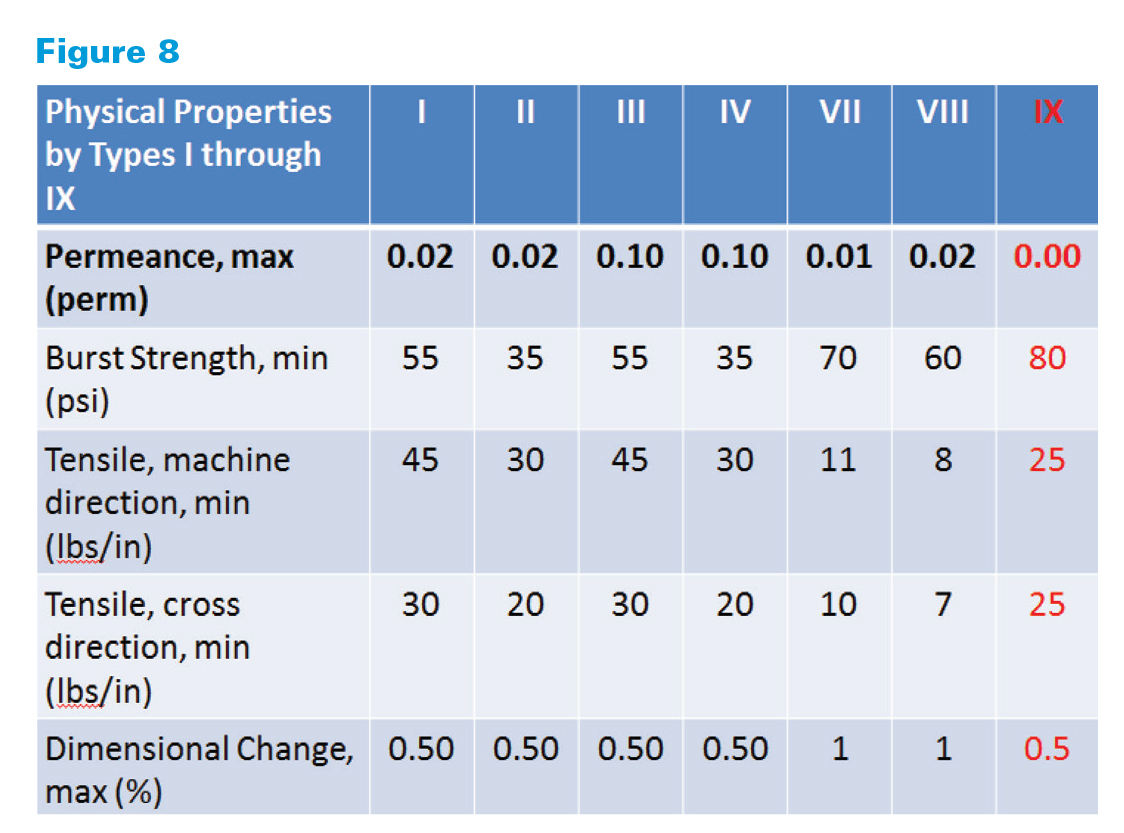 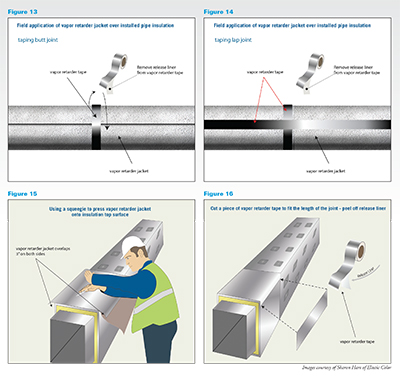 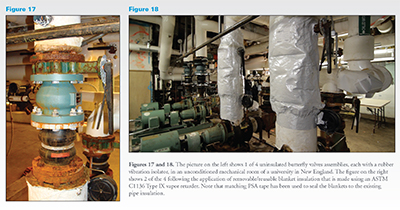