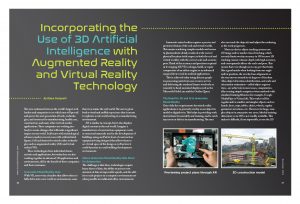 The race continues between the world’s largest tech leaders and companies to see which one will prevail and power the next generation of tools, technologies, and resources for manufacturing, health care, construction, and many other vertical market applications. These companies are working tirelessly to create changes that will make a significant impact on our world. It all starts with technological advances made in recent years with artificial intelligence (AI) and immersive mixed reality technologies such as augmented reality (AR) and virtual reality (VR).

These technologies have individual characteristics and applications, but today they are also working together in advanced 3D applications and environments, all for the benefit of these companies and their customers.

With VR, users wear a headset that allows them to fully delve into a new world or environment, some that even mimic the real world. The user is given both a visual and audible experience that is meant to replicate a real-world setting in a manufacturing environment.

AR is similar in concept, but it also displays digital content in the real world. Imagine a
manufacturer of construction equipment, tools, or structural materials used in the development of buildings using an iPad in front of construction equipment being designed that allows them to see virtual specs of the design as well as how it could function in a real building/development environment.

The challenge is that these technologies require heavy doses of data, the ability to process vast amounts of data at impeccable speeds, and the ability to scale projects in a computer environment not often possible in traditional office environments.

Immersive mixed reality requires a precise and persistent fusion of the real and virtual worlds. This means rendering complex models and scenes in photorealistic detail, rendered at the correct physical location (with respect to both the real and virtual worlds), with the correct scale and accurate pose. Think of the accuracy and precision required in leveraging AR/VR to design, build, or repair components of an airline engine or an advanced surgical device used in medical applications.

This is achieved today using discrete graphics processing units from one or more servers and delivering the rendered frames wirelessly or remotely to head-mounted displays such as the Microsoft HoloLens and the Oculus Quest.

The Need for 3D and AI in Immersive Mixed Reality

One of the key requirements for mixed reality applications is to precisely overlay on an object its model or digital twin. This helps in providing work instructions for assembly and training, and to catch any errors or defects in manufacturing. The user also can track the object(s) and adjust the rendering as the work progresses.

Most on-device object tracking systems use 2D image and/or marker-based tracking, which severely limits overlay accuracy in 3D because 2D tracking cannot estimate depth with high accuracy, and consequently affects the scale and pose. This means that even though users can get what looks like a good match when looking from one angle and/or position, the overlay loses alignment as the user moves around in six degrees of freedom. Also, object detection, identification, and scale and orientation estimation—called object registration—are achieved, in most cases, computationally or using simple computer vision methods with standard training libraries (for example, Google MediaPipe or VisionLib). This works well for regular and/or smaller and simpler objects such as hands, faces, cups, tables, chairs, wheels, regular geometric structures, etc. However, for large, complex objects in enterprise-use cases, labeled training data (more so in 3D) is not readily available. This makes it difficult, if not impossible, to use the 2D image-based tracking to align, overlay, and persistently track the object and fuse the rendered model with it in 3D.

Rather than face these 2D challenges, enterprise-level users are leveraging 3D environments and AI technology in their immersive mixed reality design/build projects.

Deep learning-based 3D AI allows users to identify 3D objects of arbitrary shape and size in various orientations with high accuracy in the 3D space. This approach is scalable with any arbitrary shape and is amenable to use in enterprise-use cases requiring rendering overlay of complex 3D models and digital twins with their real-world counterparts.

This can also be scaled to register with partially completed structures with the complete 3D models, allowing for ongoing construction and assembly. Users achieve an accuracy of 1mm to 10mm in the object registration and rendering with this platform approach. The rendering accuracy is primarily limited by the device capability. This approach to 3D object tracking will allow users to truly fuse the real and virtual worlds in enterprise applications, opening many uses including, but not limited to, training with work instructions, defect and error detection in construction and assembly, and 3D design and engineering with life-size 3D rendering and overlay.

Working in Cloud Environments Is Critical

Manufacturers and engineers should be cautious about how they design and deploy these technologies, however, because there is great difference in the platform they are built on and how they are maximized for use.

Even though technologies like AR and VR have been in use for several years, many manufacturers have deployed virtual solutions that are built on an on-premise environment, where all the technology data is stored locally. On-premise AR/VR infrastructures limit the speed and scalability needed for today’s virtual designs, as well as the ability to conduct the knowledge sharing between organizations that can be critical when designing new products and understanding the best way for virtual buildouts.

Manufacturers today are overcoming these limitations by leveraging cloud-based (or remote server-based) AR/VR platforms powered by distributed cloud architecture and 3D vision-based AI. These cloud platforms provide the desired performance and scalability to drive innovation in the industry at speed and scale.