Insulation Systems: The Value of Insulation and Maintenance

The information below is excerpted from the online Mechanical Insulation Design Guide, a free resource to help engineers, specifiers, insulation contractors, and others understand how to design and maintain all types of insulation systems. The guide leads you through pre-project design questions and considerations, offers an overview of available materials, provides eight free calculators to assist with your project’s design and installation, and assists you through the entire project to the creation of a maintenance plan. NIA’s goal is to improve the quality of all insulation systems nationwide, and we urge you to make use of all of these free resources. 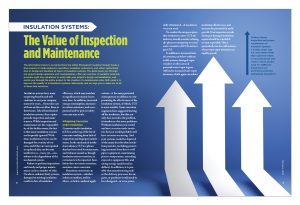 Failure to perform inspections and timely and proper maintenance carries a number of risks. On above-ambient (hot) systems, damaged or missing insulation results in loss of insulation efficiency, which may translate to significant economic losses over time. In addition, increased energy consumption, increases in carbon emissions, and occupational and/or process safety concerns may result.

Corrosion under insulation (CUI) is at the top of the list of concerns resulting from lack of inspection and improper maintenance. In the mechanical insulation industry, CUI is a phrase that has been used for many years, and it almost sounds as though insulation causes corrosion, or corrosion is to be expected. Insulation does not cause corrosion; moisture causes corrosion.

If moisture enters into an insulation system—whether indoor or outdoor, and for above- or below-ambient applications—it has many potential consequences in addition to compromising the effectiveness of the insulation system, of which, CUI is most notable. Some corrosion engineers have suggested leaving off the insulation, but this not only does not solve the problem, it introduces a lot more problems. Without insulation you would not have corrosion under insulation but you would probably still have corrosion occurring. And your systems would be deprived of the many benefits that insulation provides, including protecting personnel from hot or cold pipes/equipment, maintaining process temperature, extending expensive equipment life, and saving energy (and therefore dollars). In addition, it is possible that manufacturing and/or the delivery processes for air, gases, or products would need to be redesigned—or even potentially eliminated—if insulation were not used.

To combat the misperception that insulation causes CUI, the industry should consider refining the phrase to mitigating corrosion under insulation (MCUI) and not just CUI.
In addition to increased rates of corrosion, on below-ambient (cold) systems, damaged vapor retarders or other areas of potential water/vapor ingress will lead to increased water vapor intrusion, which again can reduce insulation effectiveness, and increase the potential for mold growth. If an inspection reveals missing or damaged insulation, repairs should be scheduled as soon as possible. This is particularly true for cold systems, where water vapor intrusion can rapidly spread.

Inspection and maintenance of mechanical insulation systems normally come down to a facility owner either understanding the value of being proactive in having a meaningful and ongoing maintenance program or being reactive as the need or requirement presents itself. Some owners employ a combination of both approaches, which also can vary from year to year. With either approach, identifying the inspection scope and schedule are really one and the same for maintenance or previously installed mechanical insulation systems. However, there are several topics that should be considered in the decision process.

There may be other questions that should be added to this list, as every facility/plant and situation is different.

Determining inspection intervals depends on many variables as well as each facility owner’s view of priorities. As an example, indoor, above-ambient applications may be inspected annually, unless they are exposed to moisture and the operating temperature is conducive to the development of corrosion. For outdoor, above- and below-ambient applications, however, a continual inspection approach should be implemented. At a minimum, inspection should include checking for signs of cracking, distortion, damage, or corrosion; evidence of hot spots on high-temperature systems; and condensation, mold, and/or ice buildup on low-temperature systems.

If the insulation system is being repaired due to damage that has been incurred, it is recommended that substrate inspection be conducted at that time rather than penetrating an intact, performing insulation system in that same general area at a later time for inspection.

Consideration should be given to the need to penetrate the system for substrate inspection in the insulation system design phase, including the potential use of inspection ports, drains, or vents; and identification of the location of inspection points.

There are multiple risks associated with not maintaining a mechanical insulation system in a timely and effective manner. Those risks, the severity of the risks, and the view of potential consequences will vary, depending on the use/service temperature of the operating system on which the insulation is installed, the surrounding environment, ambient conditions, the extent of any damage to the insulation system, the insulation system design, the quality of the installation, the timeline for correcting any damage, and other occurrences that may be unique to the area in question.

The degree of risk tolerance and determining what is an immediate or higher risk compared to a longer-term risk need to be decided by the facility owner. The following list depicts the types of risks that could occur. They may not apply to all situations and may occur separately or simultaneously.

Each company has its own description and level of risk tolerance; however, the risks associated with failing to establish, implement, and maintain a timely and proper mechanical insulation maintenance program are real and should not be overlooked
or underestimated.

The checklist below is provided as a simple guide for individuals evaluating the condition of an installed mechanical insulation system. It is not intended to be all inclusive or to serve as a stand-alone document that would allow anyone, regardless of experience level, to function as an inspector of mechanical insulation systems. Note that the listed items do not appear in order of importance or priority.

Checking for all of the occurrences listed is a good start for a maintenance plan. Upon observing any of the conditions listed, a maintenance request/action plan should be implemented to assess the degree of damage; and the affected area of the insulation system should be repaired or replaced to prevent further damage and avoid further risk.

Of the overall cost of industrial and commercial new construction and facility maintenance, mechanical insulation represents a very small amount. However, the impact of improper design, installation, and/or maintenance can be substantial. In more cases than not, mechanical insulation is typically taken for granted during the design phase, not normally inspected during the construction phase, and not focused on in the maintenance phase. That combination will ultimately yield negative results for the facility owner and others in the decision and construction chain.

Decisions regarding the need for and type(s) of mechanical insulation, as well as allocating the investment, are made during the design and construction phases of a facility. Without timely inspection and proper maintenance of insulation systems, a facility owner may not only realize lower than expected return on investment but also create a much greater need for additional investment and experience potential operational disruptions.

This content has been reproduced from NIA’s Mechanical Insulation Design Guide which will be available at www.insulation.org/designguide in the first quarter of 2021.