Mechanical Insulation Is an Underutilized Technology in Energy-Efficiency Efforts

This summer has seen a series of all-time heat records being set worldwide. In July, a global heat wave stretched over most of the northern hemisphere, with locations all over the globe recording their highest-ever temperatures. These dangerous heat waves are likely to continue and worsen, making energy efficiency and lowering environmental impact vitally important. 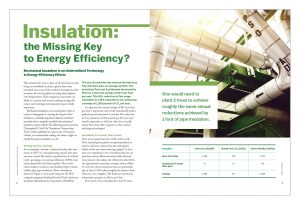 Mechanical insulation is an unsung hero when it comes to being green. Lowering the impact of fossil fuels is a critically important objective, and that’s precisely what a properly installed and maintained insulation system will do. The following quotes are from Christopher P. Crall. His “Insulation: Greener than Trees!” article, published in a prior issue of Insulation Outlook, is recommended reading and shines a light on exactly how green insulation can be.

As an example, consider a chemical facility that uses steam at 350°F in a manufacturing process that operates year-round. The steam is produced in an oil-fired boiler operating at an average efficiency of 80%. Cost of purchased fuel oil is $4 per gallon. The 4-inch steam header is outdoors and insulated with 2 inches of fiber glass pipe insulation. These calculations, shown in Figure 1, were made using the 3E Plus® computer program developed by the North American Insulation Manufacturers Association (NAIMA).

The use of insulation has reduced the heat loss from the bare pipe, on average, by 95%. The associated fuel cost has likewise decreased by 95% for a fuel-cost savings of $417 per foot per year. This 95% reduction in fuel usage translates to a 95% reduction in CO2 emissions, a savings of 2,309 pounds of CO2 per year.

As expected, the annual savings of $417 per foot per year is impressive and would undoubtedly yield a payback period measured in months. The reduction in CO2 emissions (2,309 pounds per foot per year) sounds impressive as well, but what does it really mean? How does that compare to other carbon-reducing technologies?

Insulation Is Greener than Trees!

Trees are an important part of the carbon cycle. Trees (and all green plants) use photosynthesis to remove and store carbon from the atmosphere (while at the same time releasing oxygen). In fact, trees are considered to be so beneficial that we can purchase carbon offsets associated with reforestation projects. One online site offered, for about $12, the opportunity to purchase enough carbon offsets to cover the carbon emissions from an automobile trip of about 2,300 miles (roughly the distance from Detroit to Los Angeles). The funds are invested in reforestation projects in Africa and Asia. 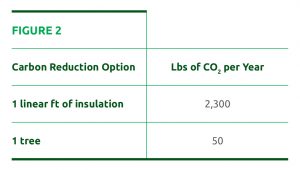 Wow. One would need to plant roughly 46 trees to achieve the same CO2 reductions achievable by insulating 1 foot of 350°F pipe.

But most pipes aren’t at 350°F. Some operate at higher temperatures, and many at lower temperatures. For illustration, consider a hot water heating system in a commercial building. Assume an operating temperature of 180°F and a 2-inch pipe with 2 inches of elastomeric insulation. For this application, assume a “clean,” natural-gas fired system operating at 75% efficiency. Use a fuel cost of $10 per million cubic feet (Mcf) for natural gas. Again using the 3E Plus program, the calculations shown in Figure 3 can be estimated. 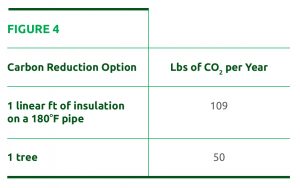 So one would only need to plant 2 trees to achieve roughly the same amount of CO2 reduction achievable by insulating 1 foot of these hot water pipes.

What about cold piping? Let’s take a look at a 4-inch chilled water pipe insulated with 1 inch of cellular glass insulation (see Figure 5). Assume that cooling is provided by electric chillers with a coefficient of performance of 3.0, and assume electricity is purchased at $0.10 per kilowatt-hour (kWh). Also, assume that the system is for a high-usage application that operates 95% of the time. 3E Plus yields the information in Figure 5. 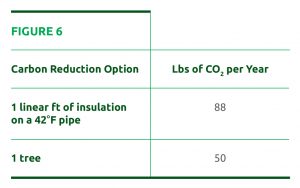 Again, one would need to plant 2 trees to achieve roughly the same annual reductions achieved by 1 foot of pipe insulation.

Clearly, insulation is a significantly more effective means of reducing greenhouse gas concentrations than planting trees. This conclusion supports the notion that it is easier to avoid carbon emissions than it is to remove carbon from the atmosphere.

So far, this discussion has not really considered the longer-term considerations of forests and the carbon cycle. Most researchers consider mature forests to be carbon neutral, in that they contain some vegetation that is young and still growing (i.e., absorbing CO2 from the atmosphere and storing carbon), but this is balanced by vegetation that has died and is decaying (i.e., giving up CO2 to the atmosphere or the soil). While established forests serve as a significant storehouse for carbon, any carbon stored in trees is eventually returned to the environment.

This discussion should not be interpreted as an argument for not planting trees. Trees provide many useful benefits. They provide shade in the summer, shelter for wildlife, and important building materials, and they are much more pleasing to look at than a piece of insulation. As a method for controlling greenhouse gases, however, insulation is greener than trees.

What about other carbon-reduction technologies? How does insulation stack up to some of the other methods being discussed?

What about more fuel-efficient cars? Combustion of gasoline releases about 20 pounds of CO2 per gallon of gasoline. Assuming 12,000 miles of driving per year, increasing the average fuel efficiency of a car by 1 mile per gallon (a 5% increase over the current national average of 20 miles per gallon) would save 29 gallons of gasoline per year and reduce CO2 emissions by roughly 570 pounds per year.

Clearly, insulation has a great deal to offer to energy-efficiency efforts. Although it may not be the newest or most exciting technology, there’s no arguing with the results it produces. Properly installed insulation can make the difference on whether a building meets its energy goals or not—making the use of insulation absolutely vital to an energy-efficient future.

This article was published in the August 2018 issue of Insulation Outlook magazine. Copyright © 2018 National Insulation Association. All rights reserved. The contents of this website and Insulation Outlook magazine may not be reproduced in any means, in whole or in part, without the prior written permission of the publisher and NIA. Any unauthorized duplication is strictly prohibited and would violate NIA’s copyright and may violate other copyright agreements that NIA has with authors and partners. Contact publisher@insulation.org to reprint or reproduce this content.

15 Ways to Insulate Your Bottom Line

Every business owner, regardless of what industry he or she is in, is always looking for ways to improve. Following are some tips to consider when you are evaluating your business processes and looking at ways to protect your bottom line.

Proper use of insulation goes a long way toward saving energy, but those involved in the energy industry know that more efforts are needed to make a lasting impact. Reducing greenhouse gas emissions is one of the key steps to avoiding catastrophic climate change worldwide, yet there are hundreds of coal-fired power plants on the

6 Construction Industry Trends to Expect in 2018