Insulation Treatments and Corrosion under Insulation: What Works 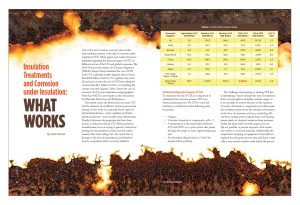 One of the most common concerns about industrial insulation systems is the risk of corrosion under insulation (CUI). Many papers and studies have been published regarding the financial impact of CUI on different sectors of the U.S. and global economies. The 2013 National Association of Corrosion Engineers (NACE) Impact Study estimated the cost of CUI in the U.S. industrial market segment alone at more than $300 billion (Table 1). On a global scale, across all economic sectors, the cost of CUI was estimated at more than $2.5 trillion in 2013, not including the current economic impacts. Table 1 shows the cost of corrosion (CoC) across industries and geographies. Note that NACE is now known as the Association for Materials Protection and Performance. 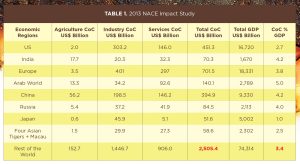 This article covers the factors that can cause CUI and the elements of an effective corrosion prevention strategy. It also looks at commonly found types of industrial insulations—water repellent and hydrophobic insulations—and considers their effectiveness. Finally, it discusses the properties that have been proven to reduce the risk of CUI. Many insulation manufacturers focus on trying to prevent water from getting into the insulation system, but this article assumes that water will get into the system due to damage or the lack of maintenance, and therefore focuses on products with a corrosion inhibitor.

Understanding the Causes of CUI

To minimize the risk of CUI, it is important to understand the corrosion process. CUI is an
electrochemical process. For CUI to start and continue, a combination of the following must be present:

The challenge of preventing or slowing CUI lies in identifying a way to disrupt this mix of conditions. Since our atmosphere naturally contains oxygen, it is not possible to remove this part of the equation. Corrosive chemicals or compounds most often enter the insulation system from the external environment in the form of rainwater, acid rain, coastal fog, fallout from cooling towers, exhaust from coal-burning power plants, or chemical emissions from processes within the plant itself. As with oxygen, it is usually not possible to prevent exposure of the insulation system to corrosive materials. Additionally, the temperature of piping or equipment is that which is required for each given process area, and there is typically a very narrow window under which the process runs properly. Therefore, it is not possible to keep the pipe or equipment from operating within, or cycling through, the temperature corrosion zone.

Industry experts agree that the primary cause of CUI is water ingress into or condensation within the insulation system that migrates to the exposed metal surface beneath. This situation can occur due to poorly installed insulation and jacketing, damage to the system that allows water to enter, or just unusual weather conditions like severe storms or flooding that expose the system to atypical conditions.

For the reasons detailed above, water is able to get inside the outer metal jacketing and migrate to the pipe or equipment beneath the insulation without passing through it.

A Systematic Approach to Mitigating CUI

In an ideal world, CUI mitigation is a systematic approach that must include the following elements.

Inhibiting Corrosion at the Molecular Level

If we look back at the conditions needed for corrosion to be triggered, we must revisit how we can further break the corrosion cycle. The answer is to look at the chemistry of the insulation material being used and how it reacts with the water that will eventually work its way to the metal pipe or equipment surface.

Johns Manville Thermo-1200® calcium silicate and Sproule WR-1200® perlite both contain a proprietary corrosion-inhibiting formulation: XOX. The XOX Corrosion Inhibitor® is part of the chemistry of each product and is dormant as long as the insulation system is dry. However, when water enters the system and comes in contact with the insulation material, it activates the corrosion-inhibiting compounds and creates two levels of protection.

Remember that one of the conditions necessary for CUI to begin is the presence of corrosive (low-pH) ions that typically enter the insulation system from the external environment in rainwater. When the water carrying these corrosive ions comes in contact with insulation that contains corrosion-inhibiting compounds, it picks up slightly alkaline ions from the compounds. These buffering ions neutralize the acidic, corrosive ions and work to keep the insulation system, including the metal pipe or equipment surface, at a neutral pH, thereby minimizing the risk of corrosion starting (see Figure 1). 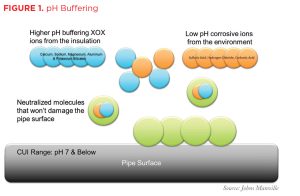 The second, and more powerful, level of protection is the formation of a protective passivation layer on the surface of the metal beneath the insulation. When water migrates through and/or around the insulation system and collects at the insulation/metal interface, it dissolves molecules of the silicate ions in the corrosion-inhibiting package. These ions then collect on the metal surface, forming a protective “silica gel” coating, and react with iron compounds on the metal surface to form inorganic iron silicate that helps stabilize and toughen the coating (see Figure 2). 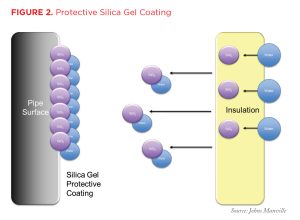 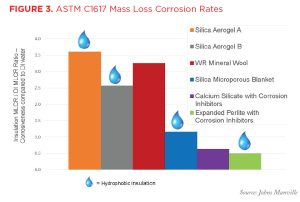 It is important to understand the mechanisms of CUI so that truly effective mitigation methods can be selected and employed. It also is critical to approach any CUI prevention strategy as a complete system solution and not look for a single, silver bullet cure.

With the understanding that water will eventually penetrate many insulation systems and come in contact with exposed metal surfaces beneath the insulation, relying solely on the insulation material to keep water away from the metal surface is not an effective approach. Additionally, since that water often contains corrosive compounds, using insulation materials that contain corrosion-inhibiting chemistry that will both neutralize the acidic contaminants and create a protective silica passivation layer on the metal pipe or equipment surface is an effective solution.