Jacketing applied over mechanical insulation can serve several purposes. Regardless of the type of jacketing and insulation, jacketing is used to ensure both the short-term and long-term performance of the insulation in the particular application. Assuming the jacketing is specified, manufactured, supplied, and installed correctly, over time it will only perform as designed if properly maintained.

Several types of jacketing are used on mechanical insulation materials, including all service jacket (ASJ), foil-scrim-kraft (FSK), sheet metal such as aluminum, metal foil, various types of thin plastic, synthetic rubber laminates with pressure-sensitive adhesive (PSA), metal foil with PSA, multi-ply laminates with PSA, and fabrics with mastics and adhesives. The integrity of the jacketing is critical to the insulation’s performance, whether the insulation is applied to air handling ducts, pipes, or equipment—indoors or outdoors—and whether the system operates at above-ambient or below-ambient temperature. This is why maintenance of the jacketing is so important. Since maintenance decisions generally are made by facility owners (who set budgets), jacket maintenance can be made a priority for insulation maintenance workers.

This article describes several different applications and the role of insulation jacketing maintenance in each.

For above-ground ducts and pipes, the thermal insulation system ensures that conditioned air or water flows from one place to another with a controlled temperature change. This controlled change would be a temperature decrease for above-ambient systems and a temperature increase for below-ambient systems. In essence, the insulation on above-ambient HVAC systems serves the dual purposes of controlling thermal energy transport (i.e., energy savings) and providing thermal comfort (i.e., controlling distribution of energy) for occupants of the space. Indoors, there is lower probability (but not a zero probability) that the insulation will become wet or damaged by physical abuse. Nevertheless, the jacketing on indoor applications—typically a lightweight material such as ASJ, FSK, or plastic sheet—secures the insulation to the surface being insulated. If the jacketing becomes torn and dislodged, the insulation material usually goes with it. Therefore, if the jacketing becomes damaged and is not quickly repaired or replaced, the penalty is typically both wasted energy and loss of thermal comfort for the building occupants.

The penalties for not maintaining insulation jacketing on below-ambient HVAC systems are much more severe, since they include the same penalties for above-ambient systems plus an additional penalty. In cold systems, the insulation serves to control thermal energy gain and provide thermal comfort. The jacketing not only protects and secures the insulation, but it must also serve as an effective vapor retarder, preventing moisture migration to the duct or pipe surface and the subsequent build-up of condensed water. Any breach of the vapor retarder, sooner or later, leads to moisture condensation. And wet insulation generally does not do anything useful. It must remain dry to perform.

The ASHRAE Research Project – 721, “The Effect of Moisture Content on the Thermal Conductivity of Insulation Materials Used on District Heating and Cooling Pipes,” documents that in the heating mode (up to 450°F), the effective thermal conductivity of wet insulation can be from 10 to 115 times greater than the same material in a dry state. For below-ambient applications, the effective thermal conductivity can be 2.5 to 17 times greater. In either case, but particularly in above-ambient applications, the insulation is not only rendered useless, but the net energy loss actually can be greater than if there were no insulation at all. While the above-referenced ASHRAE RP-721 was specifically conducted for buried district energy pipe systems, the physics remains the same: wet insulation does not work. For above-ground applications with weather-exposed insulating piping systems, the insulation jacketing must be maintained to keep the insulation dry and performing as it was designed.

Figure 1 shows some well-installed, well-maintained duct insulation on a below-ambient outdoor duct. The jacketing is a multi-ply laminate.

Figure 2, by contrast, shows an outdoor insulated duct where the jacketing has split open due to a poorly installed duct support (i.e., the sheet metal saddle was not installed as it was supposed to have been) and the duct insulation and jacketing were subsequently poorly maintained. After the split in the jacketing occurred, the insulation was exposed to the atmosphere, resulting in moisture condensation on the duct surface. This problem could have been avoided by having maintenance personnel identify the problem area, remove the wet insulation, replace it with new insulation, and re-jacket it with new multi-ply laminate jacketing.

Figure 4, by contrast, shows poorly designed and maintained pipe insulation jacketing on a project that experienced extensive moisture condensation problems. The resulting water and mold build-up is a consequence of both poor design and poor jacketing maintenance. It is not always simple to identify where the problem begins and where it ends. The plastic jacketing shows signs of having been stepped on repeatedly.

Figure 6 shows outdoor hot and chilled water pipes that have not experienced any moisture condensation problems due to good design, materials, installation, and maintenance. Of course, foot traffic on most insulation systems can be extremely damaging—a fate this system is protected from by its location. The damage is initially inflicted on the jacketing itself, then on the insulation. This is a problem at many process facilities in particular. Once the damage has occurred, rainwater enters the insulation system and eventually results in corrosion, especially if the metal surfaces are uncoated and there are frequent or prolonged maintenance periods when the lines are at ambient temperature.

Figure 8 shows pipes held together with insulated clamp and groove-type fittings that are jacketed with PVC fitting covers. These covers have been heavily damaged by foot traffic and needed replacement.

Industrial applications can be even more challenging when it comes to maintaining the insulation and its jacketing. There are several reasons for this, including the following:

Figure 9 shows a process pipe at an industrial facility that has been properly jacketed. It would appear, however, that this jacketing is relatively new. It is a challenge to keep the lap and butt joints effectively sealed with caulk, a material that will deteriorate over time and is not visible until the jacketing is removed. Maintenance of sealants suffers from the “out of sight, out of mind” syndrome. The only effective solution for outdoor systems is to periodically dismantle a section, inspect the sealants, and determine whether the entire system needs to be resealed.

Figure 10 shows a system that obviously needs to be re-jacketed. In fact, the insulation materials themselves probably need to be replaced with a high-compressive-strength material, assuming the facility owner cannot stop workers from walking on the pipes.

When it rains on the pipe with the damaged jacketing and insulation, the water will bypass the jacketing, such as it is, and likely be absorbed by the insulation. When the system is operating, the water will boil off, causing no further damage but resulting in high heat losses due to the high latent heat of vaporization of the leaking water (about a thousand Btus per pound of water, a quantity that can add up quickly with a leaky system in a rainy climate). When the system is shut down for maintenance (assuming that the insulation system itself is not being maintained), the water will migrate to the surface of the pipe, where it is likely to initiate CUI—and CUI is extremely costly to mitigate once it starts.

Figure 12 shows the consequence of corrosion on metal jacketing itself. The aluminum jacketing on the lower pipe was incorrectly specified for this application. It became corroded by leaking fluids from the pipe, a design issue that should have been anticipated. The upper pipe has been re-jacketed with a multi-ply laminate resistant to the corrosive effects of the process fluids.

There are several reasons to use thermal insulation in mechanical applications. Whether for energy efficiency, energy savings, process control, condensation control, or thermal comfort in HVAC applications, its use can be easily justified by economics. To attain the design thermal performance, appropriate jacketing must be specified, correctly installed, and properly maintained. If any of these steps are missed, including maintenance, the insulation materials probably will not perform as specified, and the consequence will be higher operations costs. If CUI is a consequence of poorly maintained insulation jacketing, piping system replacement costs can become very expensive.

Below-ambient air handling ducts and chilled water pipes with a major condensation problem would accrue similar replacement costs for the piping system and the insulation system. In the meantime, if the facility suffers from wet insulation, the owner is paying for much greater energy use, since the wet insulation does not effectively insulate. Further, dripping water can by itself lead to costly problems, e.g., if the water drips onto electrical equipment.

The performance of a thermal insulation material is dependent on its protection from water, water vapor condensation, and physical abuse. Insulation jacketing can provide that protection and thereby ensure the insulation material’s performance. To be successful, however, the jacketing must be properly maintained. A well-maintained insulation system reduces the operating costs of a facility—commercial or industrial. Overall, the benefits of a regular, sustained jacketing maintenance program will far outweigh the costs of that maintenance. 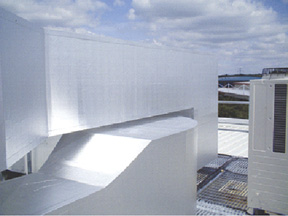 A below-ambient air handling duct, located outdoors, jacketed with a multi-ply laminate. This insulation system has been designed, installed, and maintained properly and hence, by excluding water and water vapor, it is providing the intended insulating performance. 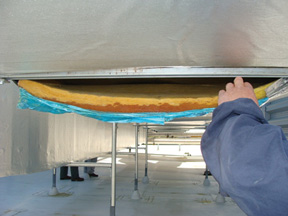 The insulation jacketing, a multiply laminate on the same project shown in Figure 1, has broken open at a support that is missing the sheet metal saddle. While this saddle should have been installed, the lack of maintenance by the facility owner is leading to a significant energy penalty. An immediate repair could have prevented the condensed water build-up in the fiberglass insulation. 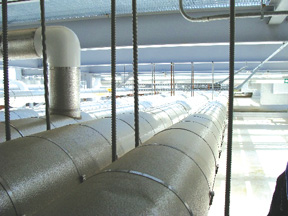 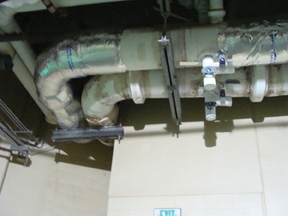 The insulation jacketing on these chilled water pipes, located in a relatively humid environment exposed to the outdoor air, shows signs of extensive water condensation damage. Once the system started dripping, the owner applied the metal duct tape to the jacketing in a futile attempt to stop the condensation problems. 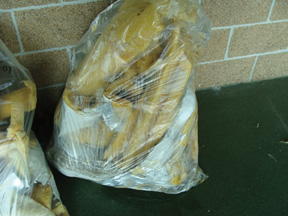 Soaking wet fiberglass insulation with ASJ materials removed from chilled water pipes. While better late than never, this project had operated for several years with the wet insulation, resulting in extensive corrosion of the pipes as well as excessive energy use. 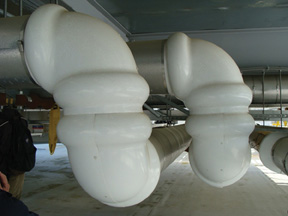 Hot and chilled water pipes with an insulation system, including PVC fitting covers, that has been well maintained. Admittedly, this system would be difficult to walk on due to its location. 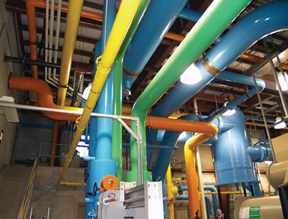 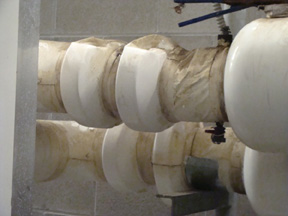 Insulated fittings with PVC jacketing that have suffered from foot traffic damage. These should be replaced to provide the vapor retarder performance of the PVC jacketing. 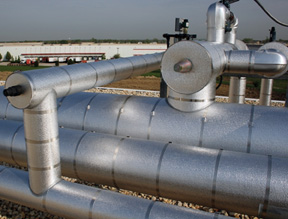 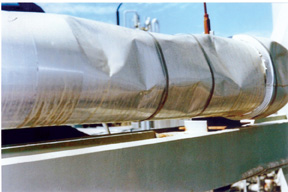 The aluminum jacketing on this process pipe ought to be replaced as part of the facilities maintenance program. Failure to do so sooner rather than later will likely result in wet insulation that performs poorly and possibly leads to problems with CUI on the process pipe itself. 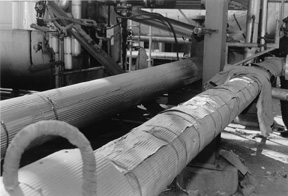 “A Tale of Two Pipes” shows one (on the left) on which the insulation system has been recently replaced (reportedly with a high-compressive-strength insulation as well as new aluminum jacketing) and one (on the right) still waiting to be reinsulated. This comparison demonstrates clearly the level of damage that can occur from foot traffic. 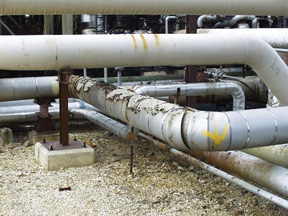 In this photo, the lower pipe’s aluminum jacketing has apparently suffered from the corrosive effects of the process fluid. The upper pipe has been re-jacketed with a multi-ply laminate that is resistant to this corrosive fluid.