Many Older Workers Would Prefer to Ease into Retirement

Employers Offer Phased Retirement—But Only to Some Employees

Stephen Miller, CEBS, is Online Manager/Editor, Compensation & Benefits, for Society for Human Resource Management (SHRM) Online. He formerly held editorial positions at the National Association of Securities Dealers, the American Institute of Certified Public Accountants, the Depository Trust Co., and the Society of Competitive Intelligence Professionals, where he served as Editor of Competitive Intelligence magazine. He has a master’s degree in journalism and mass communication from New York University​ in addition to his CEBS accreditation. Contact him at smiller@shrm.org and follow him on Twitter at @SHRMsmiller. Copyright 2019, SHRM. This article is reprinted from www.shrm.org with permission from SHRM. All rights reserved. NIA has a new partnership with SHRM and will be publishing new HR articles throughout 2020. 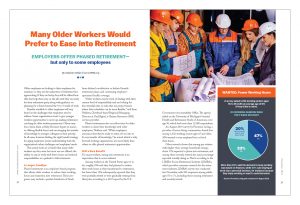 Older employees are looking to their employers for assistance as they see the unknowns of retirement fast approaching. If they are lucky, they will be offered benefits that help them stay on the job until they are ready for their retirement party, along with guidance on planning for a future beyond the 9-to-5 world of work.

Benefits available to older employees will vary based on the challenges that employers need to address. Some organizations want to give younger workers opportunities to move up, making retirement coaching for older workers paramount. Others may fear a brain drain as Baby Boomers depart en masse, so offering flexible hours and encouraging the transfer of knowledge to younger colleagues is their priority. In all cases, however, finding the right benefit strategy for aging employees means understanding both the organization’s talent challenges and employees’ needs.

This article looks at a benefit that many older workers say they want but most are not offered: the ability to stay at work with fewer hours and reduced responsibilities as a prelude to full retirement.

Phased retirement is an employer-based program that allows older workers to reduce their working hours and transition into retirement. These programs may include a partial drawdown of funds from defined contribution or defined benefit
retirement plans, and continuing employer-sponsored health coverage.

“Older workers may be tired of dealing with their current level of responsibility and are looking for less-stressful roles or roles that are project-based, where their schedules can be more flexible,” said Sean Nehlsen, Cleveland-based Regional Managing Director at OneDigital, a Human Resources (HR) services provider.

Phased retirements also can allow time for older workers to share their knowledge with other employees, Nehlsen said. “When employees announce that they’re ready to retire, it’s too late to do any transfer of knowledge,” he noted, which is why forward-looking organizations are more likely than others to offer phased retirement opportunities.

For many workers, easing into retirement is an expectation that is never realized.

Among workers in the United States ages 61 to 66, roughly 29% said they had planned to reduce their work hours as they transitioned to retirement, but fewer than 15% subsequently reported that they were partially retired or were gradually retiring from their jobs, according to a 2017 report by the U.S. Government Accountability Office. The agency relied on the University of Michigan’s biennial Health and Retirement Study of Americans over age 50, which had more than 12,000 respondents.

An August 2019 survey by Provision Living, a provider of senior living communities, found that among 1,032 working seniors ages 65 and older, 20% wanted to stay employed but cut back their hours.

Other research shows that among pre-retirees with higher-than-average household savings, about 17% expected to phase into retirement; and among those recently retired, the same percentage reported actually doing so. That’s according to the LIMRA Secure Retirement Institute (LIMRA), which provides consumer research for the retirement industry. LIMRA’s survey was conducted last November, with 995 responses among adults ages 55 to 71, including those nearing retirement and recently retired. 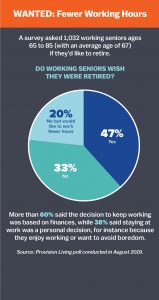 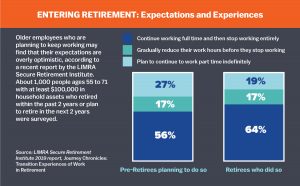 The availability of phased retirement is increasing—albeit slowly, and often only for most-valued employees. Among employers that responded to the Society for Human Resource Management’s 2019 Employee Benefits survey, the share of organizations offering some employees the option to phase into retirement through an informal program has risen steadily in recent years, reaching 15%. The prevalence of formal, phased retirement programs broadly available to workers, meanwhile, has stalled at around 6%, according to the survey, which was conducted earlier this year and drew responses from 2,763 HR professionals.

Employers, the data suggest, prefer to limit phased retirement opportunities to high performers and those with in-demand skills—which they can more easily do ad hoc. But that could lead to charges of discrimination, based on who is offered the right to shift to part-time work, although this has not yet been tested in the courts, benefit specialists say.

Among these large corporations, the survey revealed, “14 percent frequently and 41 percent sometimes have employees phase into retirement on an informal or case-by-case basis,” said Lauren Hoeck, Senior Director of Retirement Consulting at Willis Towers Watson. “The types of employees targeted by these approaches included those in professional,
technical, and manager positions more often than those in routine and manual positions.” 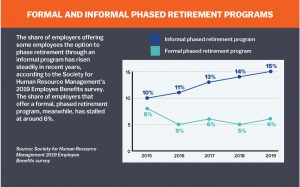 “Men may be less likely to phase into retirement because it is more difficult to do so with their pre-retirement job functions,” the researchers noted. For instance, 23% of men worked in managerial jobs before retirement, compared with 13% of women.

Many employers that are hesitant to provide phased retirement opportunities are nonetheless providing flexible arrangements to allow older workers to change positions, for example by stepping down from a managerial role to a role as an individual contributor, Hoeck said.

A December 2018 survey of more than 1,800 employers by the nonprofit Transamerica Center for Retirement Studies (TCRS) found that to help employees transition to retirement, 21% of organizations enable employees to take on jobs that are less stressful or demanding.

Providing partial-year employment opportunities so employees can spend the winter months in warmer climates, for instance, is another variation on phased retirement, Hoeck noted. Still another option on the upswing is inviting select retirees to return to work on a consulting or contingent basis, and offering training programs to redeploy retired workers who miss working and want to return to employment either full or part time, she said.

When putting phased retirement opportunities in place, employers should decide whether to maintain full health care and retirement plan benefits for those who are phasing into retirement—which is the approach most likely to keep older employees on board, benefit specialists say.

Alternatively, employers can reclassify program participants as part-time employees who are not entitled to group benefits, or they can provide a different benefit approach, such as offering subsidies for these workers to purchase health care on the individual market through the Affordable Care Act’s (ACA’s) marketplace exchanges. Employer subsidies can be made in pretax dollars through individual-coverage health reimbursement arrangements (ICHRAs), for instance. Smaller employers with fewer than 50 full-time or equivalent employees can provide similar subsidies through qualified small-employer HRAs (QSEHRAs). Those using a QSEHRA to buy an exchange policy may be eligible for a government tax credit or subsidy, which ICHRA participants are not eligible to receive.

If organizations choose not to offer full benefits for phased retirees, they should keep close watch on these employees’ hours to ensure their part-time status is maintained, benefit advisors point out.

Many 401(k) plans permit in-service distributions after age 59 without penalties. Additionally, organizations with defined benefit pension plans can let near-retirees reduce their work hours and use partial distributions from the pension plans to supplement their reduced wages, as IRS rules allow pension distributions beginning at age 62 for those who are still employed, and the 2006 Pension Protection Act permits participants to collect partial plan benefits while phasing out of full-time employment.

For defined benefit plans, the salary component of the pension formula should be designed—or amended, if necessary—so that it is based, for instance, on plan participants’ 3 consecutive highest-earning years, rather than their final 3 years of employment, pension advisors recommend.

Phased retirement programs also can be structured to encourageolder workers to mentor younger colleagues who will take overtheir responsibilities.

“While granting pre-retirees the opportunity to continue earning income with the flexibility to retire on their own terms, employers can involve them in succession planning, mentoring and training, thereby facilitating more seamless transitions,” Catherine Collinson, TCRS President and CEO wrote in the third-quarter 2019 issue of Benefits Quarterly. “This is especially valuable in today’s highly competitive, nearly full-employment labor market and will be for the foreseeable future as the critical mass of Baby Boomers retire.”