Mechanical Insulation in Hospitals and Schools

The study’s approach was to contact NIA insulation contractor members to request insulation specifications and quantity take-offs for recent hospital and school projects. Using this data, insulation energy assessments were performed to estimate the energy savings due to mechanical insulation. The projects were selected to represent the range of climates reflected in DOE Climate Zones 1-7 (Figure 1). For details about the study methodology, see the sidebar to this article.

While the vast majority of mechanical insulation applications in commercial buildings are indoors (not exposed to weather), the climate zone location does impact the type of HVAC equipment used and its run time. Building locations across the range of climate zones were therefore of interest.

Obtaining data on suitable projects proved more difficult than anticipated. Many of the projects submitted involved renovations or small additions rather than new construction. For this and a variety of other reasons, the quantities of projects hoped for were not achieved in every climate zone, but the 14 buildings that were selected, 9 hospitals and 5 schools, are thought to be representative of the range of climates in the United States.

A total of 14 projects were analyzed as part of this study (5 schools and 9 hospitals). The locations and general characteristics of the buildings are summarized in Figure 2.

While most of the hospital projects were additions or expansions of existing facilities, the nature of the projects allowed them to be treated as stand-alone facilities for analysis purposes.

The study found that a significant quantity of mechanical insulation is being used in hospitals and schools. Figure 3 summarizes the quantities of pipe and duct insulation in each of the 14 facilities analyzed.

All the school projects included insulation on domestic hot water (DHW) piping. The total lengths of DHW piping ranged from 1,200 linear ft to 7,800 linear ft (1½ mi.). Within each of the facilities, size and thickness of insulation varied as well. All the facilities contained significant percentages of ½ in. and ¾ in. DHW piping with 1-in.-thick insulation (typically used for drops and run-outs to fixtures and for recirculation lines). The largest DHW lines in schools were 3 in. insulated with 1½-in.-thick insulation. On average, the schools analyzed contained about 0.022 linear ft of DHW piping per square foot of floor space.

Insulation quantities for the HVAC systems, as expected, depended on the HVAC systems used. Piping for hydronic heating water (HHW) systems was present in three of the five schools. Hydronic piping is commonly used to supply heating coils in air handling units and terminal boxes and for perimeter heating. The three schools that had HHW piping averaged about 0.032 linear ft per square foot of floor space.

All the schools had insulated supply-air ductwork (averaging about 0.47 ft2 of duct surface per square foot of floor area). Current energy codes and standards do not require insulation for supply-air ducts in conditioned (or indirectly conditioned) spaces. Condensation control and/or noise control are likely the design objectives for these systems.

Four of the five schools had insulated return-air ductwork as well. Note that energy codes and standards do not typically require insulation on return-air ductwork within the building envelope, but acoustical considerations are important in classrooms.

Insulated DHW piping in hospitals is extensive. Quantities ranged from 9,700 linear ft to over 50,000 linear ft (9.5 mi.). Piping sizes ranged up to 4 in. The hospitals averaged about 0.069 linear ft of DHW piping per square foot of floor space.

Insulated return-air ductwork was present in six of the nine hospitals analyzed and averaged 0.15 ft2 of duct surface area per square foot of floor area.

As discussed earlier, most of the projects analyzed were either recently completed or under construction. Actual energy consumption data was not available for most of these buildings. The site energy usage values were therefore projected using the DOE Commercial Building Benchmark Models as a point of comparison.

As indicated in Figure 4, the savings due to mechanical insulation vary greatly. The largest savings are for the hospital in Los Angeles (85 billion Btu/yr), while the smallest savings are in the elementary school in Sunrise, Florida (0.28 billion Btu/yr). The ratio of high to low is roughly 300 to 1. Normalized to building area, the savings range from roughly 200 kBtu/sf to 2 kBtu/sf (a ratio of 100 to 1).

Figure 4 also shows that the variation in savings within the two categories of buildings is less but still significant. For the schools, energy savings ranged from 10 billion Btu/yr to 0.28 billion Btu/yr (a range of about 40 to 1). Normalized to floor area, the variation is still roughly 12 to 1 (from 27 to 2.3 kBtu/sf/yr). Again, this variation is explained by the differences in the systems installed. Within the hospital category, the estimated savings due to mechanical insulation ranged from a high of 85 billion Btu/yr to a low of 17 billion Btu/yr. This is a 5 to 1 variation. Normalizing to floor area reduces this variation to about 2 to 1 (194 kBtu/sf/yr to 89 kBtu/sf/yr). The average energy savings for the nine hospitals in this study was 149 kBtu/sf/yr.

These energy savings are large. Expressed as a percentage of the total projected energy usage of the building, they range from 4 percent to 101 percent.

In reality, that doubling of energy consumption could but probably would not occur because the boiler capacity would be exceeded (boilers would be running flat out trying to replace the heat lost from over 15 mi. of uninsulated steam and hot water lines), while at the same time the chiller capacity would be exceeded (trying to satisfy the increased cooling load caused by over 15 mi. of uninsulated hot lines). Temperature control in the patient spaces would be lost, and the patients would need to be moved to another hospital because the thermal conditions inside would be unacceptable. The hospital would be shut down until the system could be repaired, so the energy usage would not double.

The data from the study provides an opportunity to address two questions:

Figure 7 compares the estimated energy savings for the 14 buildings with the savings that would be expected if the insulation requirements of ASHRAE 90.1 had been strictly followed. Savings were calculated for three cases:

As before, the savings are expressed as billions of Btu/yr (relative to the bare case). The last two columns compute the differences between the cases expressed as a percent of the projected annual site energy usage.

Comparing the two versions of the ASHRAE 90.1, we see that the incremental savings expected for the 2010 version over the 2007 version range from 0.1 percent to 3.4 percent. The average savings are 0.7 percent for these schools and 2.1 percent for these hospitals.

Four of the five schools exceed the requirements of the 2010 standard as well. For hospitals, only one of the nine hospitals exceed the 2010 requirements, and additional energy savings ranging from 0.1 percent to 2.6 percent could accrue if the other eight complied with ASHRAE 90.1–2010.

2. Note that ASHRAE 90.1-2007 is used as a base for this discussion. Since the requirements for mechanical insulation are unchanged from the 1999 version through 2007, comparisons hold for those earlier versions as well.

The authors would like to thank the participating contractors for their assistance during the study. 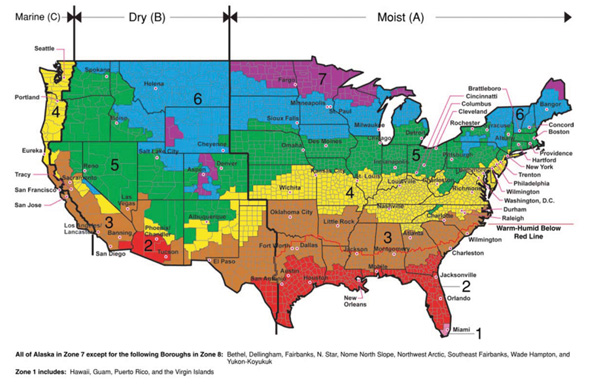 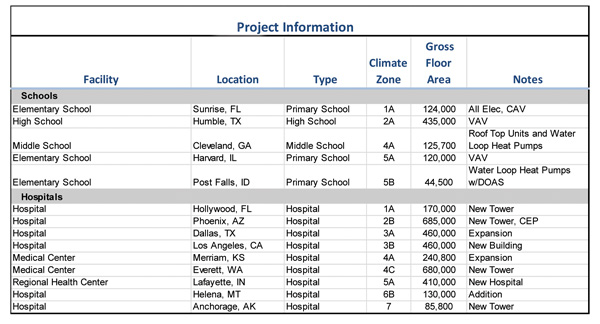 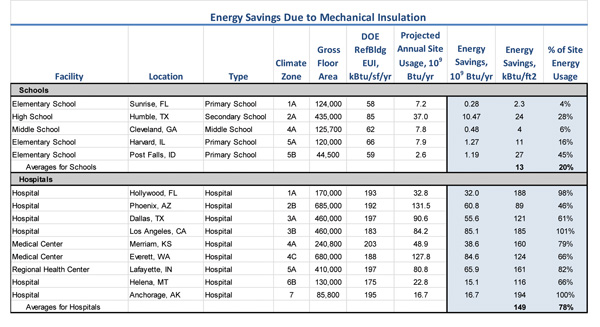 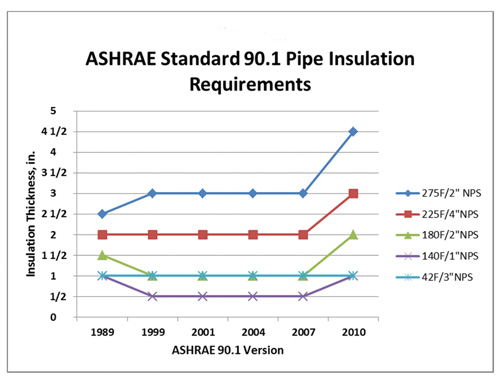 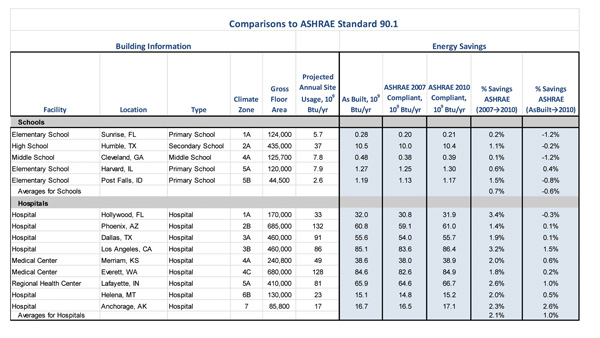 Mechanical insulation is a well-developed technology for reducing energy consumption. Most professionals in the insulation industry have a fundamental appreciation for insulation’s energy-saving benefits. Insulating a bare surface can easily reduce heat losses or heat gains by 90 to 95 percent, and the need to conserve energy is obviously increasing. Approximately 85 percent of the

How Many Barrels of Oil Can Mechanical Insulation Save?

During the past year or two, most of us have become accustomed to hearing about the high cost of a barrel of crude oil. We’ve also probably frequently read or heard about how Americans consume one-fourth of the world’s oil. For the year 2004, that worked out to about 20.8 million barrels per day out

Making the Case for Mechanical Insulation

When 2009 dawned, no one on Capitol Hill knew much (if anything) about mechanical insulation. The National Insulation Association (NIA) and its Foundation for Education, Training, and Industry Advancement had been working on a way to change that for several months through the Mechanical Insulation Marketing Initiative (MIMI). Along with the public relations firm GolinHarris

In 2010, a mechanical insulation energy appraisal was conducted on a variety of State of Montana facilities in and around Helena. The objective of the Montana Mechanical Insulation Assessment Pilot Program was to determine the energy, cost, and emission reduction opportunities available via the repair, replacement, and/or maintenance of mechanical insulation systems in Montana’s state

Mechanical Insulation in the Spotlight