Dave Cox works in Strategic Business Development, North American Technical Insulation for Owens Corning, (www.owenscorning.com), a manufacturer of insulation, roofing, and fiberglass composite materials. Its insulation products conserve energy and improve acoustics, fire resistance, and air quality in the spaces where people live, work, and play. The business is global in scope, with operations in 33 countries and headquarters in Toledo, Ohio. Mr. Cox has 40 years of experience in industrial and commercial insulation marketing. He can be reached at David.cox@owenscorning.com. 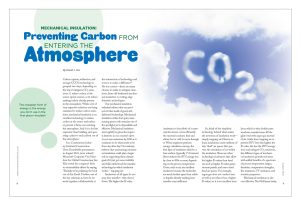 At a Construction Industry Institute/Construction Users Roundtable presentation in August 2021, (now retired) Microsoft Corporate Vice President for Global Construction Jim Ellis stated his company’s drive to sustainability efforts by saying, “Frankly, we’re polluting the heck out of this Earth. I believe one of the key solutions is, how do we work together, collaboratively at the intersection of technology and science to make a difference?” He was correct—there are many choices to make to mitigate emissions, from old-fashioned mechanical insulation to cutting-edge futuristic technologies.

Insulations of all types do not stop heat transfer—they slow it down. The higher the R-value (resistance to heat flow) of a material, the slower or less efficiently the material conducts heat and allows hot or cold to move through it. When engineers perform energy calculation surveys, the first layer of insulation added to a bare surface (typically 1” if mineral fiber) reduces the BTU energy loss by close to 80% or more, depending on the process temperature. Gases, such as air, are excellent insulators because the molecules are much farther apart than solids or liquids, thereby making heat transfer very inefficient.

So, think of the simplistic technology behind what makes the invention of insulation work—simply trapping air. Fibrous or foam insulations create millions of tiny “dead” air spaces that prevent the circulation of air within the insulation. There are other technological advances that allow for higher R-values than dead air, such as higher R-value gases, vacuum panels, and nano-sized dead air spaces. For example, argon gas does not conduct heat as well as air (thus it has a higher R-value), so it is an excellent insulator, which is why double-pane windows manufacturers fill the glass void with argon gas instead of air. Aside from trapping air to prevent BTU loss (the higher the R-value, the less the BTU energy loss) and mitigate CO2 emissions, the different types of mechanical insulation provide end users with added benefits of a spectrum of process temperature ranges, densities, compression strengths, fire resistance, UV resistance, and acoustic properties.

Mechanical insulation is also cost effective. The McKinsey study, (Figure 1) shows insulation is the MOST cost-effective solution after researching a myriad of technologies that can be employed to reduce greenhouse gas (GHG) emissions. 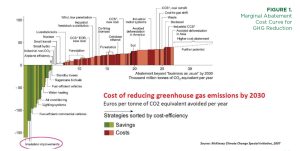 As I often say on behalf of our industry, “The cheapest form of energy is the energy you don’t use in the first place—insulate!”

Mechanical insulation is a great example of a simple, low-cost, yet highly effective, point-source carbon reduction strategy—especially since many applications are at higher temperatures—that minimizes the CO2 being emitted in the first place. NIA member company Shannon Global Energy Solutions (Shannon) out of New York documented savings on a 350° steam system with just 48 fittings. By adding only 1.5” of removable/reusable insulation covers to areas such as valves, steam drums, flanges, and strainers, Shannon showed a 10-month payback on a $31,000 installed job. Better yet, the CO2 savings were 444 tons by adding the insulation to these 48 areas. Doing a simple calculation, the result is a cost of $70 per ton of CO2 removed. A key measure to show productivity of a project is dollars spent to remove a ton of CO2. Just think—something as simple as trapped air can result in these tremendous benefits for the end user.

There are other technologies that are much more sophisticated than unassuming mechanical insulation and have been developed to reduce CO2 at the source, or even more complex technologies that suck CO2 out of the air. Our federal government, primarily the Department of Energy (DOE), and private companies have been busy investing millions of dollars in new technologies:

The 2015 Paris Agreement commits the 191 countries that have joined the agreement to limit the global average temperature rise to well below 2°C above pre-industrial levels, and to aim for 1.5°C by 2050. There is promise in these technologies to help countries and companies help meet their sustainability goals. Figure 2 shows, however, that the world is far from this goal.

Companies and governments are evaluating all kinds of technologies to mitigate CO2 emissions in order to attain their goals or the ones of the Paris Agreement. Insulation is a part of that solution, and the technology is to simply invest in its trapped air. Mechanical insulation has been an economical and successful technology for decades, and increasing its use for decarbonization will also give companies a number of other benefits like personnel protection and process efficiency. It also saves on energy bills the minute it is installed. And it keeps on saving every day thereafter. Old-fashioned mechanical insulation is not low-hanging fruit, but fruit that is ripe for the picking!