As 2013 draws to a close, the U.S. economy is coming off a lackluster year in terms of gross domestic product (GDP) growth and employment. Real GDP for the third quarter (Q3) of 2013 increased at an annual rate of 2.8%, primarily driven by a build-up in inventories. Consumer expenditures account for about 70% of GDP and rose by 1.5%. Nonresidential
fixed investment, which includes business expenditures for enhanced capacity and productivity, increased by 1.6%.1 GDP growth for the year is expected to be 1.7%, but Q4 2013 will be more positive at 2.4%.2 Unemployment will average 7.4% for 2013 as a whole, but Q4 should show improvement to 7.1% as more jobs are added to the employment base. Inflation will again be a bright spot for consumers, with the year-end consumer price index (CPI) only up about 1.5%.3

Although the 2013 “fiscal cliff,” sequestration, and government shutdown are behind us, we face a new year with great uncertainty. In December, Congress reached a tentative agreement that the House approved on December 12. The agreement will reduce some of the uncertainty regarding fiscal policy, which may positively affect consumer confidence. We can expect a degree of conflict over federal spending and funding policy that may cause more reluctance for consumers to spend and the private sector to invest. Additionally, after the launch of the Patient Protection and Affordable Care Act (PPACA) in November 2013, there is still uncertainty regarding the cost of implementing the act to employers, consumers, and taxpayers.

Business confidence is also a driver of business investment decisions. The Small Business Optimism Index, published by the National Federation of Independent Business, stood at 91.6 as of October 2013. “The average value of the Index since the recovery started is 91, 8 points below the 35-year average through 2007 and well below readings typically experienced in a recovery.”5 The recent decline in the index is attributed primarily to the outlook for business conditions and for real sales growth. It is noteworthy that survey respondents indicated that the 3 most important problems their businesses face—in order—are government regulations and red tape, taxes, and poor sales.

The 2014 outlook for the U.S. economy is for the recovery to continue at a modest pace. As Figure 2 (on page 8) indicates, real GDP forecasts for 2014 generally fall in the 2.4% to 3% range, with the unemployment rate improving to 6.8% from 7% by year end.6 The forecast for inflation for 2014 at 1.9% is only slightly higher than the previous year. The benchmark 10-year Treasury yield is expected to rise 3.1% to 3.4% as the Federal Reserve reduces its purchases of securities that have provided reserves into the monetary system. Most analysts believe that the Federal Reserve will begin tapering its security purchase program in the spring of 2014, but labor market improvements in Q4 2013 may hasten the start of this process. However, if the markets perceive that the tapering is likely to occur sooner, interest rates will rise in advance of the expected federal action, as occurred in the summer of 2012.

Business credit market conditions for commercial and industrial loans should remain relatively accommodating in terms of rates, but lender credit underwriting standards will
remain largely unchanged, with some slight improvement. The Federal Reserve’s October 2013 Senior Loan Officer Opinion Survey indicates that, across all borrower size categories, only 11.1% reported that credit standards had “eased somewhat.”7 Commercial real estate credit markets have continued to improve as rents and occupancy levels rise. However, there is significant variance in activity among property types and geography. For example, the National Association of Realtors estimates that at Q4 2013, industrial vacancy rates nationwide are at 9.2%, while rates in the Los Angeles area are about 4%.8

In terms of the value of construction put in place, year-over-year October 2013 total private nonresidential construction spending declined by 3.4%. Most of the decrease is explained by reductions in communication and power plant spending, at -18.8% and -16.5% respectively. Lodging and commercial construction spending were the leaders, at 18.6% and 6.6%. Educational, amusement and recreation, transportation, and manufacturing all increased approximately 3%; while office and health-care expenditures increased at less than 2%.

Public nonresidential construction, dominated by state and local construction, increased by 2.4%. However, the sub-sectors most closely aligned with commercial insulation demand (health care, education, public safety, and amusement and recreation) declined by $3.3 billion or 3.8%. The only exception was transportation, which grew by 6.5%.13

2014 should be better than 2013, with certain sectors expected to perform much better than others. The 2014 AIA Consensus Construction Forecast (Figure 6 on page 12) is a compilation of 6 forecasts. The consensus indicates overall growth of 7.6%, with private commercial construction leading the way with 11.5% growth, followed by industrial construction at 6.3%, and institutional construction at 5.6%.14 Within the commercial category, hotel construction is expected to continue as the strongest sector at 15%. Retail and related construction is anticipated to increase by 11.7%. This growth is based on improvement in vacancy rates and retail rent rates. The National Association of Realtors expects national retail vacancy rates to decline from 10.4% in Q4 2013 to 9.9% in Q4 2014. Average rents are expected to increase by 2.2% for next year.15 For certain types of retailers, brick and mortar construction will be constrained by customers shifting to online purchases.

The consensus forecast for health-care construction is expected to increase 7.7% over 2013. However, there will be countervailing influences. As the population ages, more health-care facilities serving this population segment will be needed. Conversely, shorter hospital stays and increasing pressure to contain costs will serve to dampen the need for other types of facilities. Effects of the PPACA are not yet fully understood and may increase the demand for health-care construction beyond current expectations.

Office construction is expected to rise by 9.5%. The demand for this sector will be heavily influenced by local market conditions. Areas with high employment growth rates will experience declining vacancy rates and rising rents, creating demand for new space, while other markets will not fare as well. A headwind for this sector comes from companies reconfiguring their existing office space to more efficiently house their workforce, therefore needing less space. Additionally, new office space design reduces square feet of office space per employee.

In general, institutional construction is expected to show improvement not seen in 2013, but still at a slow pace. Construction activity for education, health care, recreation/amusement, and public safety will recover more strongly as state and local governments experience improved revenues and financial condition.

Associated Builders and Contractors’ (ABC’s) Construction Confidence Index tracks 3 facets of the nonresidential construction industry: sales prospects, profit margins, and staffing level expectations. Index values are calculated at 6-month intervals. The latest report, for the first half of 2013, indicated slight improvement over the last half of 2012. According to ABC Chief Economist Anirban Basu, “Overall, contractors are saying positive factors will outweigh negative ones, helping create an improved construction environment in 2014.”16 Further, ABC believes that 2014 will experience high single-digit growth in nonresidential construction, with the industry continuing to add jobs.

As 2013 comes to a close, leading indicators of nonresidential construction demand are indicating that 2014 will see positive, but still recovering, growth in the industry.

ABC’s Construction Backlog Indicator (CBI) is a forward-looking national economic indicator that reflects the amount of work that will be performed by commercial and industrial contractors in the coming months. The index generally has trended upward over the past 4 years, with the October 2013 reading at 8.21 months.17 ABC’s analysis of the backlog data at Q3 2013 indicates that the CBI varies significantly by region: South, 9.79 months; Northeast, 8.23 months; West, 7.38 months; and the middle states at 6.15 months. The South and West regions are likely to experience the most expansion in backlog going forward.

AIA’s Architecture Billings Index is a leading economic indicator that predicts nonresidential construction activities for the upcoming 9 to 12 months. Any score above 50 indicates an increase in billings. The Index stood at 51.6 in October 2013, down from August and September readings of 53.8 and 54.3. The regional indexes for October saw the West at 55.9, followed by the South at 54.4, the Midwest at 51.6, and the Northeast at 49.7. AIA’s index for new project inquiries rose in October to 61.5 over September (at 58.6), but down from August (at 63.0). AIA Chief Economist Kermit Baker noted that the continuing uncertainty surrounding the overall U.S. economy has affected the demand for nonresidential facilities and, therefore, slowed progress on new building projects.18

As the new year unfolds, the nonresidential construction industry will continue its slow, steady recovery, with some sectors and geographic regions performing better than others. Improving labor market conditions during Q4 2013 may well portend more positive momentum in the economy. Uncertainty regarding monetary policy, credit market conditions, and regulation implementation will likely hold back more rapid recovery. 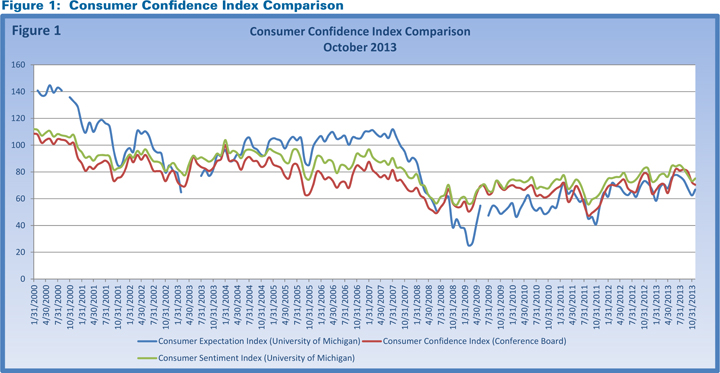 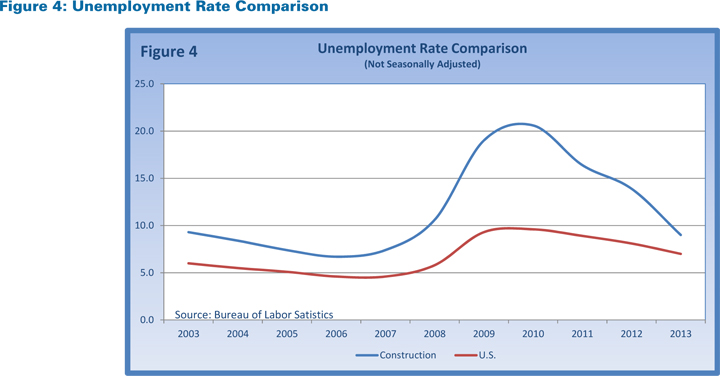 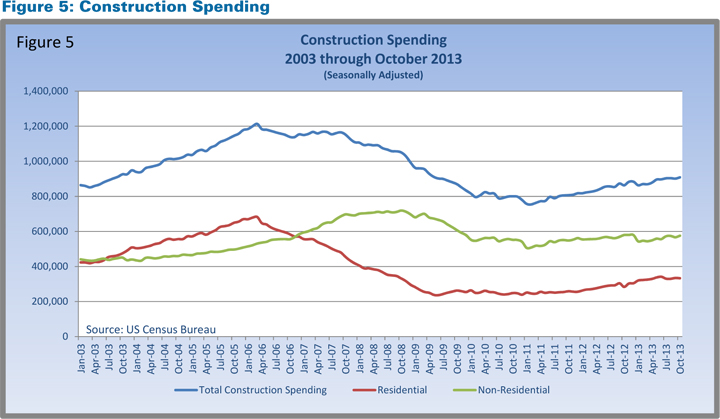