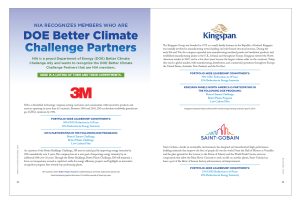 3M is a diversified technology company serving customers and communities with innovative products and services operating in more than 65 countries. Between 1990 and 2010, 3M cut absolute worldwide greenhouse gas (GHG) emissions by 72%.

As a partner of the Better Buildings Challenge, 3M met its initial goal by improving energy intensity by 25% cumulatively over 9 years. The company has set a new goal of improving energy intensity by an additional 30% over 10 years. Through the Better Buildings, Better Plants Challenge, 3M will maintain a focus on transparency around a capital set-aside for energy efficiency projects and highlight an innovative recognition program that rewards top-performing plants.

The Kingspan Group was founded in 1972 as a small, family business in the Republic of Ireland. Kingspan was initially involved in manufacturing metal cladding and roll-formed structural sections. During the early ’80s and ’90s, the company expanded into manufacturing insulated panels and insulation products, and established manufacturing plants in the U.K., Ireland, and throughout Europe. Kingspan entered the North American market in 2007, and in a few short years became the largest-volume seller on the continent. Today, they reach a global market, with manufacturing, distribution, and commercial operations throughout Europe, the United States, Australia, New Zealand, and the Far East.

Saint-Gobain, a leader in sustainable environments, has designed and manufactured high-performance building materials that improve the lives of people all over the world. From the Hall of Mirrors at Versailles and the glass pyramid at the Louvre, to the Statue of Liberty and the World Trade Center, and even components that allow the Mars Rover Curiosity to seek out life on another planet, Saint-Gobain has been a part of the fabric of human history, advancement, and improvement.

In North America, the company upholds this rich history of innovation by making a material difference in the spaces where people work, live, play, heal, and learn. Along with its North American headquarters in Malvern, Pennsylvania, Saint-Gobain has approximately 150 locations in North America and more than 14,000 employees.

Saint-Gobain received a 2019 Better Practice Award for launching “Compress It,” a voluntary competition between facilities to
identify and repair compressed air leaks that led to $2.5 million in annual energy savings.

Saint-Gobain received a 2021 Better Practice Award for creating a “Green Awards” program to highlight and recognize individual researchers for their sustainability-related research and development projects.