Not If, but When: Virginia Legislation Bans Pay-if-Paid Clauses in Construction Contracts

Joseph A. Figueroa and Thomas E. Minnis are both Associates with Watt, Tieder, Hoffar, & Fitzgerald, LLP (https://watttieder.com). Watt Tieder is one of the largest construction boutique law firms in the United States, with a diverse and experienced team of attorneys representing many of the world’s leading corporations, developers, and contractors on both domestic and international projects. The firm represent more than half of the Top 30 Engineering News Record contractors and most of the nation’s top sureties. With offices in six cities in the United States, the firm provides knowledgeable and practical legal representation to the construction, surety, government contracts, and bankruptcy industries worldwide. This article is reprinted with permission from ConsensusDocs, July 11, 2022, https://www.consensusdocs.org/not-if-but-when-newly-enacted-virginia-legislation-bans-pay-if-paid-clauses-in-construction-contracts. 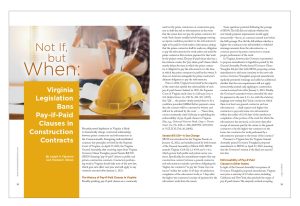 Recently passed legislation in Virginia is likely to dramatically change contractual relationships between prime contractors and subcontractors in the Commonwealth. Abrogating well-established common-law principles set forth by the Supreme Court of Virginia, on April 27, 2022, the Virginia General Assembly, after receiving input from Virginia Governor Glenn Youngkin, passed Senate Bill 550 (SB550) banning “pay-if-paid” clauses in public and private construction contracts. Contractors performing work in Virginia should take note of the new law, which goes into effect next year and will apply to any contracts executed after January 1, 2023.

The History of Pay-if-Paid Clauses in Virginia

Some questions persisted following the passage of SB550. The bill did not indicate whether the new timely payment requirements would apply retroactively—that is, to contracts entered into before the bill’s passage. Nor did the bill address whether a higher-tier contractor was still entitled to withhold retainage amounts from the subcontractor—a
common practice by prime contractors to ensure proper performance of the work.

In Virginia, however, the Governor is permitted to propose amendments to legislation passed by the General Assembly. Newly elected Governor Glenn Youngkin did just that with SB550, proposing certain amendments to add more certainty to the new code section. Governor Youngkin’s proposed amendments explicitly permitted retainage and added an additional clarifier that the new requirements will not apply retroactively, instead only applying to construction contracts entered into after January 1, 2023. Finally, the Governor’s amended version extended the time for payment in the new § 11-4.6, with the statutory language now stating that “[a]ny contract in which there is at least one general contractor and one subcontractor . . . shall require such higher-tier contractor to pay such lower-tier subcontractor within the earlier of (i) 60 days of the satisfactory completion of the portion of the work for which the subcontractor has invoiced, or (ii) seven days after receipt of amounts paid by the owner to the general contractor or by the higher-tier contractor to the lower-tier contractor for work performed by a subcontractor pursuant to the terms of the contract.”

Pursuant to Virginia law, the Virginia General Assembly passed Governor Youngkin’s proposed amendments to SB550 on April 27, 2022, meaning that the Governor’s version is the final one enacted into law.

Enforceability of Pay-if-Paid Clauses in Other States

Almost all courts in the majority view states require that the condition precedent to the
subcontractor’s payment be clearly and unambiguously expressed. A 1990 Florida Supreme Court decision is instructive on this point. In DEC Elec., Inc. v. Raphael Constr. Corp., the court explained “[i]f a [pay-if-paid] provision is clear and unambiguous, it is interpreted as setting a condition precedent to the general contractor’s obligation to pay . . . . In purported risk-shifting provisions between a contractor and subcontractor, the burden of clear expression is on the general contractor.” 558 So. 2d 427, 429 (Fla. 1990). Notably, the burden to ensure that the pay-if-paid clause is clear and unambiguous rests with the prime contractor.

Compare this relatively permissive formulation to a handful of states, including Arizona, Illinois, and Maryland, which protect the rights of subcontractors by expressly limiting the use of pay-if-paid clauses in certain contexts. Illinois and Maryland, among other states, have enacted statutes preventing prime contractors from relying on pay-if-paid clauses to defeat subcontractor claims relying on mechanics’ liens.

Arizona, on the other hand, is unique in that it has identified specific exceptions to the enforcement of conditions precedent that limit subcontractor recovery. For example, in L. Harvey Concrete, Inc. v. Agro Constr. & Supply Co., the Arizona Court of Appeals reversed a summary judgment decision that had enforced a pay-when-paid clause. 939 P.2d 811, 815 (Ariz. Ct. App. 1997). The court explained that such conditions precedent will not be enforced in the case of gross mistake, fraud, or error leading to a lack of honest judgment, and found that the subcontractor had potentially demonstrated that the owner made a gross mistake of fact.

Thus, even in states that permit pay-if-paid clauses, courts are cognizant of the risk that prime contractors hold an advantage over subcontractors in contract drafting, and they have taken steps to protect the subcontractors.

Disclaimer: The views expressed in this article are not necessarily those of NIA. Readers should not take or refrain from taking any action based on any information without first seeking legal advice.