Safety is a key component for all construction companies, but it can be hard to keep up with regulations. Insulation Outlook staff recently reached out to the Occupational Safety and Health Administration (OSHA) to get an update on the latest regulatory developments. Below is the most current information available from an OSHA spokesperson on construction-related regulations. 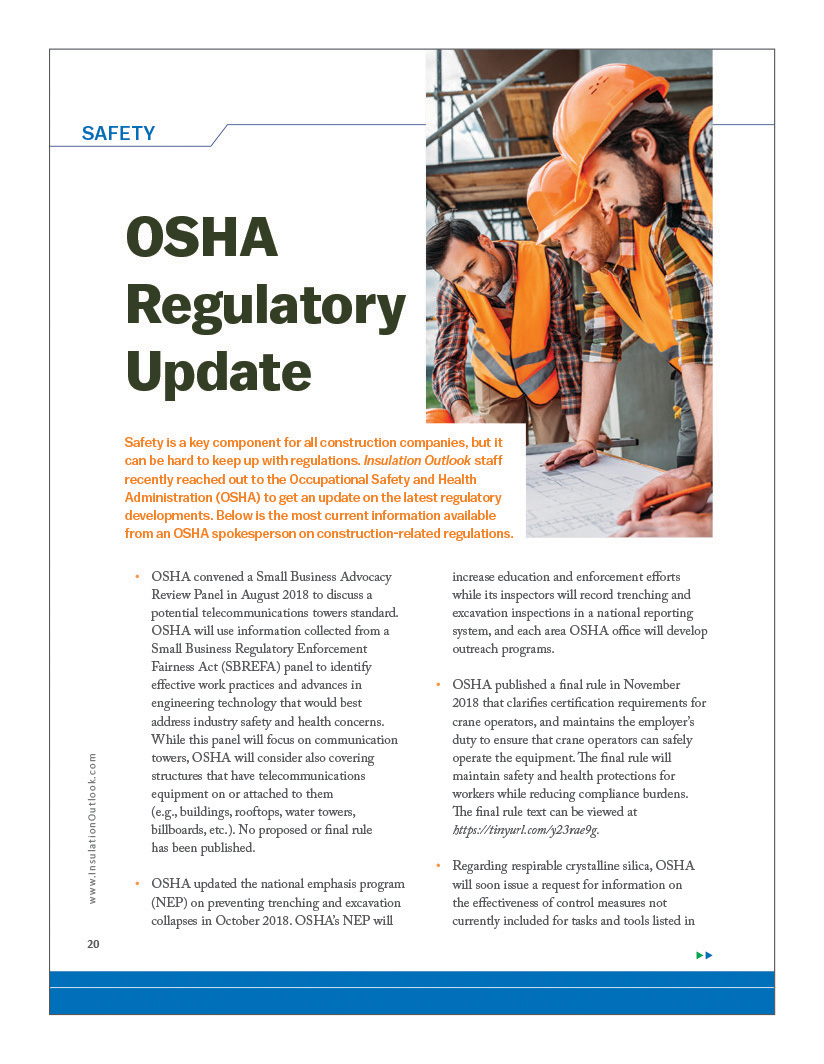 After a review of the comments received and a review of the applicability of existing OSHA standards, OSHA proposed to revoke ancillary provisions applicable to the construction and shipyard sectors on June 28, 2018 (82 FR 29182), but to retain the new lower PEL of 0.2 µg/m3 and the short-term exposure limits (STEL) of 2.0 µg/m3 for those  sectors. OSHA has evidence that beryllium exposure in these sectors is limited to the following operations: abrasive blasting in construction, abrasive blasting in shipyards, and welding in shipyards. OSHA has a number of standards already specifically applicable to these operations, including ventilation (29 CFR 1926.57) and mechanical paint removers
(29 CFR 1915.34).

Because OSHA determined that there is significant risk of material impairment of health at the new lower PEL of 0.2 µg/m3, OSHA continues to believe that it is necessary to protect workers exposed at this level. However, OSHA is now reconsidering the need for ancillary provisions in the construction and shipyards sectors, and is currently reviewing comments received in response to the proposal to finalize the rulemaking.

Under the Occupational Safety and Health Act of 1970, employers are responsible for providing safe and healthful workplaces for their employees. OSHA’s role is to help ensure these conditions for America’s working men and women by setting and enforcing standards, and providing training, education and assistance. For more information, please visit OSHA’s website at www.osha.gov.

It is an interactive, online, game-based training tool for small business owners, workers, and others interested in learning the core concepts of hazard identification. After using this tool, users will better understand the process to identify hazards in their own workplace.

This tool is intended to:

Visit www.osha.gov/hazfinder/index.html to use it.

The "$afety Pays" program will:

Construction Confined-Space Standard The Occupational Safety and Health Administration (OSHA) has been working on the confined-space standard for several years. The standard was published as a final rule on May 4, 2015, with an effective date of August 3, 2015. Recently, OSHA issued a stay of enforcement until October 2, 2015. During this period, OSHA

Legislation has been pending in Congress since April 2009 to significantly amend the Occupational Safety and Health Act of 1970. An Occupational Safety and Health Administration (OSHA) reform bill was introduced to the House of Representatives in the spring of 2009. A similar piece of legislation, the Protecting America’s Workers Act (PAWA), was introduced into