Insulation
material comparison often involves contrasting the physical properties of the
materials as represented on the products’ data sheets. Going through this exercise,
it is important to be sure that the physical properties being compared are
tested to the same test method and procedure, and the values are expressed in
the same units. If not, one is comparing apples to oranges, resulting in an
inaccurate analysis of materials. It also is essential to understand the effect
that the physical property will have on the insulation performance in relation
to the units of measure.

A similar relationship exists between the terms used to
define thermal conductivity: k-factor and R-value. The unit to describe k-factor
is defined at a standard thickness of per 1″. This allows an end user to
compare materials on an equal basis, regardless of thickness. In contrast,
R-value is a measure of the material in the thickness it is used in the field,
and varies depending on the referenced thickness. In regards to units used to
measure moisture penetration resistance, permeability is similar to the
k-factor, and permeance is similar to the R-value. A material with a
permeability listed as 1.0 perm-inch would have a permeance of 1.33 at ¾”
thickness (1.0/.75 = 1.33). For moisture penetration resistance values, the
smaller the number, the better the value.

Derived moisture penetration resistance results can be
converted from one term to the other using appropriate conversion factors
(referenced in the table on page 29).

A common test method to measure this property is ASTM E96,
“Standard Test Methods for Water Vapor Transmission of Materials.” Two test
procedures (see images above) are called out in the Standard: wet cup
(Procedure A) and dry cup (Procedure B). Both procedures start by conditioning,
measuring thickness, and weighing the sample. For the wet cup method, the
sample is placed over a pan with water in it and the edges sealed.  For the dry
cup method, the sample is placed over a pan with a desiccant in it and the
edges sealed. The pans are then placed in an environmental chamber at a
specified temperature and humidity, and weighed daily, until the weight gain or
loss reaches equilibrium (shown in the chart on page 29). At this time, the
permeability or permeance of the material can be established. For some
insulation or jacketing materials, the procedure used can make a slight
difference in the stated value. Hence, to be sure one is comparing apples to
apples, one should use values obtained from the same procedure (which should be
stated on the product’s technical data sheet).

It also is important to understand the
significance of both the physical property itself and the value stated. One of
the key determining factors to consider when evaluating the significance of a
test value is the precision of the test. A result that goes beyond what the
test can accurately measure does not provide added value. Also, the definition
of what constitutes a good value, “low perm” in this case, often changes over
time. Further, within the permeability or permeance value, one should consider
the value of the entire system?specifically, how much weight should be placed
on the permeability of the material itself versus the permeability of the seams.
For example, aluminum jacketing has a very low permeance, but if the seams are
not properly sealed, the system loses much of its integrity so that no matter
how good the jacketing is, the overall insulation system may not perform as
expected. In most cases, slight differences in permeability would require many
years to make a difference in the performance of the system, even if the
percentage change may seem large. Other factors probably would play a much
greater role, such as damage to the jacket or insulation.

Another key point to understand is what
effect the property will have on the performance of the insulation.
Permeability is primarily an issue with insulation on low-temperature lines
where humidity is high over long periods of time. On systems that do not have
these conditions, permeability will not be a key consideration. The lower the
line temperature and the higher the humidity, the greater the importance will
be. Hence, in Florida and the Gulf States, it can be a key factor. Over time,
with highly permeable materials, air with moisture will come in contact with
the cold pipe and form condensation between the pipe and the insulation. The
moisture creates wet insulation, which increases the chances for pipe
corrosion, mold growth, and degradation of the insulation’s thermal
conductivity, resulting in insulation and system failure. This situation is
severe and would warrant removal of the insulation. However, this is a long,
slow process taking years to develop. In contrast, if there is evidence of
moisture between the insulation and the pipe in a short period of time, the
cause is almost always an open seam or termination point where moisture-laden
air can travel unabated to the cold pipe and form condensation.

In summary, there are typically several ways to describe a
material’s performance, including its ability to resist penetration of moisture
from the air. When comparing products or determining if a material meets a
specification requirement, one must pay careful attention to the units and identified
test method. There are many reasons why it is important to understand the
physical property terms used to describe or compare materials and to be sure
one is comparing like terms expressed in the same units. Further, it is vital
to understand the effect that a particular property has on the performance of
the insulation system. 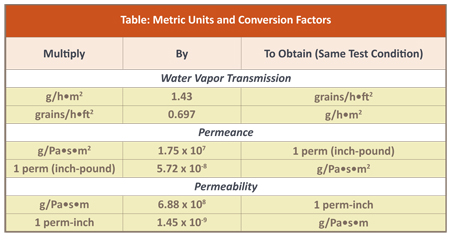 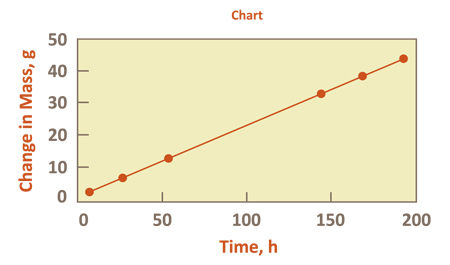