Dr. Hira Ahluwalia is President of Material Selection Resources (MSR) Inc. MSR is a materials engineering and corrosion consulting organization based in New Jersey, serving the chemical pharmaceutical, fabrication, and metal industries. Dr. Ahluwalia has extensive experience in the field of corrosion and material science, and has published numerous technical papers. He has a Ph.D. in materials and corrosion engineering from Newcastle University in the United Kingdom. A 20-year ASM and NACE member, Ahluwalia was the Chairman of the NACE Annual Conference Program Committee. He is also a Nickel Institute consultant and Materials Technology Institute (MTI) consultant. He can be reached at 609-737-8226, hira@doctormetals.com, and www.doctormetals.com.

Many of the readers of this magazine spend their careers covering stainless steels with insulating materials. It is valuable for these readers to have some basic knowledge of the different forms of corrosion of stainless steel they may encounter in the field. The mode of corrosion degradation and some practical guidelines for preventing corrosion are introduced in
this article.

Corrosion can be broadly defined as deterioration of a material by a chemical or electrochemical attack. Metallic corrosion under aqueous conditions can take place by many mechanisms with a varied impact on the integrity of the material. Some of the more frequently encountered corrosion mechanisms are:

General Corrosion. General corrosion is a uniform loss of material from the surface of the metal and is the most commonly encountered type of corrosion. The metal gradually becomes thinner and eventually loses structural integrity. In many corrosive environments the weld metal may be preferentially attacked because the cast structure of the weld can be quite different from the parent-wrought structure.

To minimize general corrosion the following methods should be considered:

Galvanic Corrosion. An electrochemical potential difference usually exists between two dissimilar metal or non-metal conductors when they are electrically connected in an electrolyte. An electrolyte generates an electric current between these two conductors. Consequently, the less noble conductor (the anode) will corrode faster, and the more noble conductor (the cathode) will corrode more slowly, as compared with the behavior of these conductors when they are not in contact.

To minimize galvanic corrosion the following methods should be considered:

Localized Corrosion. Conditions may exist that cause corrosive attack in a very specific location or under a specific set of conditions. Such attack is normally referred to as localized. Pitting, crevice attack, and microbiologically influenced corrosion are all considered localized corrosion.

Pitting is a form of very localized attack that results in the formation of holes on the metal surface that can often propagate very quickly, leading to material perforation and failure in a very short period. The micro-environment within the pit itself can be autocatalytic, making this a particularly dangerous form of attack. The chloride ion is considered a particularly aggressive pitting agent for many alloy systems.

Crevice corrosion usually takes place in a very tight gap between two surfaces. Similar to pitting, the micro-environment within the crevice can greatly differ from the general bulk environment. Concentration cells can cause this type of corrosion to progress at a very rapid rate.

Microbiologically influenced corrosion is responsible for the deterioration of a metal surface through a crevice corrosion mechanism. Certain types of bacteria form dome-shaped colonies on the metallic surface. The inside of the structure is sealed from the outside. The life cycle of the bacteria produces a corrosive environment within the colony, which causes a crevice attack of the metal.

To minimize localized corrosion the following methods should be considered:

Environmentally Assisted Cracking. Some types of corrosion degradation take place as a result of a synergistic effect of chemical environment and mechanical condition of the metal itself. Corrosion fatigue and stress corrosion cracking are the common forms of environmentally assisted cracking.

Stress Corrosion Cracking (SCC). This refers to the brittle fracture of a susceptible material under tensile stress in a specific environment over time. During this type of cracking, the metal surface is virtually unattacked over most of the surface, while fine cracks propagate through the cross section. Chloride stress cracking of stainless steel is an example of this type of attack. SCC is insidious because there is usually no manifestation of trouble before cracking appears. Failures of this type can be unexpected and hence hazardous and expensive. It is a major problem in the chemical and petrochemical industry.

Corrosion Fatigue. Corrosion fatigue may be defined as a combination of normal fatigue and corrosion that causes failure below the normal endurance limit of the metal involved. Thus it is normally encountered not as a visible degradation of the metal but as a premature failure of a component under cyclic conditions.

To minimize stress corrosion cracking and corrosion fatigue, the following methods should be considered:

To minimize intergranular corrosion the following methods should be considered: 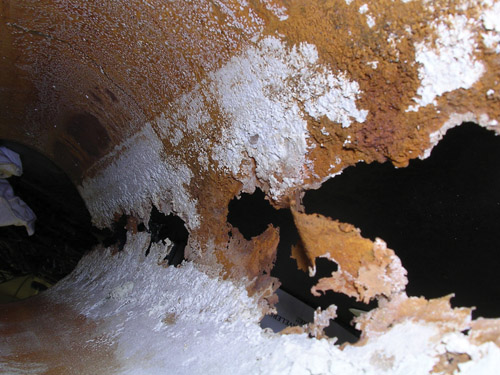 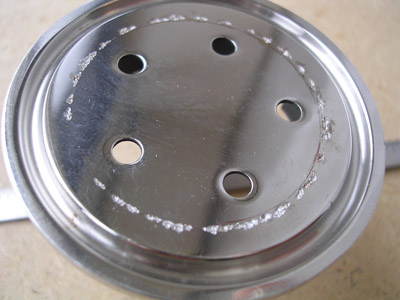 Crevice corrosion of 316L in chloride-containing water under gasket location. 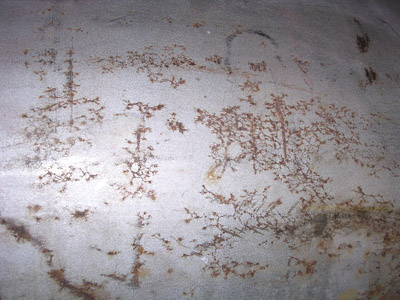 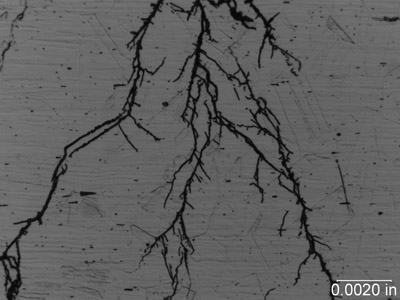 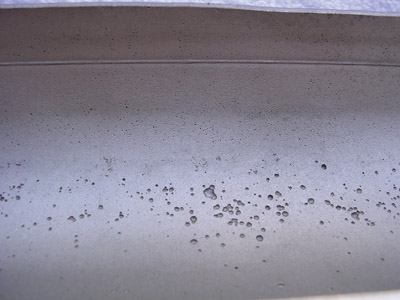