Safety Matters: Safety Incentive Programs: Are they Legal? Are the Effective? 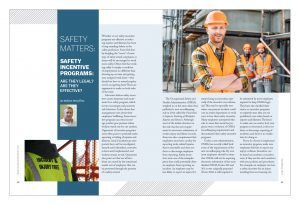 Whether or not safety incentive programs are effective at reducing injuries and illnesses has been a long-standing debate in the safety profession. Some feel that by dangling the “carrot” of some type of safety award, employees or teams will be encouraged to work more safely. Others feel that working safely is simply a condition of employment no different than showing up on time and getting your assigned work done—why should we have to reward employees for not getting hurt? There are arguments to make on both sides of the issue.

Advocates believe safety incentives create awareness and excitement for a safety program, which in turn encourages and promotes safe behaviors. It also shows that management cares about their employees’ wellbeing. Some incentive programs can even encourage positive peer pressure where workers watch out for one another. Opponents of incentive programs most often point to potential under reporting or hiding of injuries and illnesses. And, if incidents go unreported, they can’t be investigated, hazards aren’t identified, corrective actions aren’t implemented, and workers remain at risk. Opponents also point out that not all incidents are caused by the intentional unsafe acts of employees that can be prevented through the promise of a safety reward.

The Occupational Safety and Health Administration (OSHA) weighed in on the issue when they published a new recordkeeping rule in 2016 called the Final Rule to Improve Tracking of Workplace Injuries and Illnesses. Although most of the initial attention on the rule was the new requirement for electronic submission of certain injury and illness records, there was also a requirement that employers must have a policy for reporting work-related injuries that is reasonable and does not deter or discourage employees from reporting. Safety incentives were one of the examples given that could potentially deter an employee from reporting an incident. An employee may be less likely to report an injury if it meant losing an incentive, especially if the incentive was substantial. This may be especially true where one person’s incident could cost an entire department or work crew to lose their safety incentive. Many employers interpreted this rule to mean that incentive programs were a violation of OSHA recordkeeping requirements and discontinued their safety incentive programs.

Under a new administration, OSHA has recently rolled back some of the requirements of the new recordkeeping rule. By now most employers should be aware that OSHA will not be requiring electronic submission of the more detailed OSHA Forms 300 and 301 as was originally proposed (Form 300A is still required to be submitted by most employers required to keep OSHA logs). They have also clarified their stance on incentive programs to explicitly state they are not prohibited, even when based on injuries and illnesses. The key is to make sure, no matter how your program is structured, it does not deter or discourage reporting of incidents, and there is no retaliation for doing so.

If you do choose to implement an incentive program, make sure employees feel free to report any injury or illness. Incentives can be based on incidents or incident rates, if they are fair and consistent with your policies and procedures. For example, an employee can lose a safety incentive for an injury resulting from not wearing cut-resistant gloves. However, other employees who don’t wear cut-resistant gloves when required should be similarly disciplined, not just if they hurt themselves. You can’t be retaliatory just because an employee reported an injury. An even better approach is to base safety incentives on positive outcomes like completing safety and health training, conducting safety observations, or reporting near misses.

If you are considering starting an incentive program, remember, an incentive program is only one element of an effective health and safety programs. And they certainly aren’t a fix for a workplace with a serious safety culture problem. Safety programs must include training, risk assessment, frequent and regular inspections, incident investigation, and emergency preparedness, among other elements. A safety incentive should only be considered when all these basic pieces are in place first. To summarize, if you do decide to start an incentive program, and you decide to base it in whole or in part on injuries or injury rates, make sure it is designed to promote workplace safety and health, not to penalize employees for reporting incidents. Done right, a well-structured incentive program is a win-win situation. Done wrong, you may be paying employees to hide incidents and increase the overall, long-term risk of your business. So plan your program carefully.