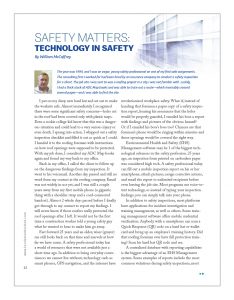 The year was 1994, and I was an eager, young safety professional on one of my first solo assignments.
The consulting firm I worked for had been hired by an insurance company to conduct a safety inspection
for a client. The job site I was sent to was a roofing project in a city I was not familiar with. Luckily,
I had a thick stack of ADC Map books and was able to trace out a route—which invariably crossed
several pages—and I was able to find the site.

I put on my shiny new hard hat and set out to make the worksite safe. Almost immediately I recognized there were some significant safety concerns—holes cut in the roof had been covered only with plastic tarps. Even a rookie college kid knew that this was a dangerous situation and could lead to a very serious injury or even death. I sprang into action. I whipped out a safety inspection checklist and filled it out as quick as I could. I handed it to the roofing foreman with instructions on how roof openings were supposed to be protected. With my job done, I consulted my ADC Map books again and found my way back to my office.

Back in my office, I called the client to follow up on the dangerous findings from my inspection. It went to his voicemail. Another day passed and still no word from my contact at the roofing company. Email was not widely in use yet, and I was still a couple years away from my first mobile phone (a gigantic thing with a shoulder strap and a cord-connected handset). Almost 2 whole days passed before I finally got through to my contact to report my findings. I will never know if those roofers really protected the roof openings after I left. It would not be the first time a construction worker told a young safety guy what he wanted to hear to make him go away.

Fast forward 25 years and an older, wiser (grayer) me still looks back on that time and marvels at how far we have come. A safety professional today has a world of resources that were not available just a short time ago. In addition to being everyday conveniences we cannot live without, technology such as smart phones, GPS navigation, and the internet have revolutionized workplace safety. What if, instead of handing that foreman a paper copy of a safety inspection report, hearing his assurances that the holes would be properly guarded, I emailed his boss a report with findings and pictures of the obvious hazard? Or if I emailed his boss’s boss too? Chances are that foreman’s phone would be ringing within minutes and those openings would be covered the right way.

Environmental Health and Safety (EHS) Management software may be 1 of the biggest technological advances in the safety profession. 25 years ago, an inspection form printed on carbonless paper was considered high tech. A safety professional today can fill out a mobile inspection report on his or her smartphone, attach pictures, assign corrective actions, and email the report to unlimited recipients before even leaving the job site. Most programs use voice-to-text technology, so instead of typing your inspection findings, you can simply talk into your phone.

In addition to safety inspections, most platforms have applications for incident investigation and training management, as well as others. Some training management software offers mobile credential verification. Anybody with a smartphone can scan a Quick Response (QR) code on a hard hat or wallet card and bring up an employee’s training history. Did that roofing foreman ever have fall protection training? Scan his hard hat QR code and see.

A centralized database with reporting capabilities is the biggest advantage of an EHS Management system. Some examples of reports include the most common violations during safety inspections, most common injury types, training requirements due, or which division has completed the most safety observations. If the roofing contractor in our example used such a program, it may have found, among other things, that the foreman in question had been written up 5 other times that year, or that the roofing department never had Occupational Safety and Health Administration (OSHA) 10- or 30-hour training. These are all powerful tools for safety professionals to use to focus their time and efforts for maximum impact.

Software platforms are only one example of technology in workplace safety. Wearable technology is being used more and more to improve workplace safety. Often attached to a hard hat or traffic vest, wearable technology can be used for proximity detection and location tracking, and some will even send an alert if a worker trips or falls. Imagine an audible alert going off when a worker inadvertently walks into the blind spot of an excavator. Wearable technology, similar to a fitness tracker, can be used to measure worker heat stress and even fatigue, which can be measured by a person’s head position or gait when they walk. Soon it will not be uncommon to be on a project where every worker, every piece of equipment, and even every power tool will have some kind of tracking device.

Another, more high-tech piece of safety equipment beginning to gain traction is the exoskeleton. Exoskeletons are wearable mechanical devices designed to prevent or reduce musculoskeletal disorders (MSDs) including back pain, carpal tunnel syndrome, rotator cuff injuries, and many others. MSDs are one of the most common, and most expensive, workplace injuries. Exoskeletons can be whole-body, Iron Man®-type devices for lifting heavy loads overhead, or as simple as a glove that provides extra grip strength. Although still cost prohibitive, expectations are high for these items.

Technology is making our workplaces safer than ever. Make sure to stay current with the changes to help keep your workers safe. 10 years from now, I may revise this article and write about my self-driving car, the drone I used to inspect the rooftop, and the virtual reality safety training I was able to deliver on site using my phone. I would set a virtual fence around the roof openings that would keep the roofers—using wearable technology—a safe distance from the openings until they could be covered. And just in case they are still mad that I wrote them up all those years ago, I’ll put on my exoskeleton before I go.