Safety Matters: Will You Be Ready When OSHA Comes Around? 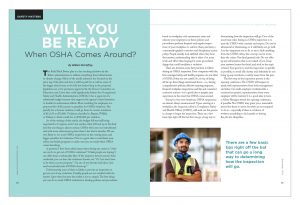 The Build Back Better plan is a far-reaching initiative by the Biden administration to address everything from infrastructure to climate change. Much of the media attention has focused on the price tag of the plan and how it will be paid for, as well as some of the bigger ticket items in the bill; but buried deep in the proposed legislation are a few provisions approved by the House Committee on Education and Labor that could significantly bolster the Occupational Safety and Health Administration (OSHA). One is approval of a substantial budget increase that supports the agency’s stated intention to double its enforcement efforts. More troubling for employers is a proposed five-fold increase in penalties for OSHA violations. The penalty for a Serious violation could go from its current maximum of $13,653 to $70,000. Violations classified as Repeat, Willful, or Failure to Abate could rise to $700,000 per violation.

As of the writing of this article, the budget bill was still being negotiated in Congress, and it was unclear what will end up in the final law. But one thing is almost certain: OSHA will come out emboldened and with more enforcement power than it has had in decades. We are very likely to see more OSHA inspections in the coming years, and bigger penalties for violations. Now is a great time to reevaluate your safety and health programs to make sure you are ready when OSHA comes knocking.

A question I have been asked many times during my career is, “what can we do to get out of OSHA violations?” I think people are hoping I can offer them a technicality like, “if the inspector doesn’t present their credential, you can have the violations thrown out.” Or “you don’t have to let them on your property.” Or, one of my favorite bad ideas, “just send everybody home if OSHA shows up.”

Unfortunately, none of these is likely to prevent an inspection or get you out of any violations. Usually, people are not satisfied with the answer I give them because the reality is not so simple. The best thing you can do to avoid OSHA violations is develop policies and procedures based on workplace risk assessments, train and educate your employees on these policies and procedures, perform frequent and regular inspections of your workplace to enforce them, and have a consistently applied corrective and disciplinary action policy. People usually look deflated when they hear that answer, understanding that it takes a lot more work and effort than hoping for some procedural slipup that could invalidate a violation.

There are, however, some best practices to follow during an OSHA inspection. Even companies with the best-managed safety and health programs can run afoul of OSHA if they are not careful. So, on top of doing all the up-front things mentioned above—i.e., having comprehensive policies, effective training programs, frequent workplace inspections, and fair and consistent corrective actions—it is a good idea to prepare your supervisors in the event that OSHA comes around.

Except in very rare situations, OSHA inspections are almost always unannounced. Upon arriving at a workplace, the inspector, called a Compliance Safety and Health Officer (CSHO), will seek out the person in charge to begin the inspection. There are a few basic tips right off the bat that can go a long way to determining how the inspection will go. One of the most basic rules during an OSHA inspection is to treat the CSHO with courtesy and respect. Do not be adversarial or threatening, or it will likely not go well. It is also important not to lie or try to hide anything from the CSHO; often, the coverup can be worse than the crime. One final general rule: Do not offer up any information that is not asked of you. Keep your answers honest but brief, and stick to the topic at hand. Your goal is to end the inspection as quickly as possible, so avoid idle chatter and definitely do not bring up any incidents or safety issues from the past.

The first step in the inspection process is the opening conference. The CSHO will request to speak with representatives from both management and labor. On multi-employer worksites like a construction project, representatives from every employer will be invited. It is a good idea to have a Safety Manager attend the opening conference, if possible. The CSHO may grant you a reasonable period for them to arrive, but they are not required to do so—especially if there is evidence of workers scrambling to fix hazards or leaving the job site altogether.

During the opening conference, the CSHO will present a credential and go over the inspection procedure. More importantly, during the opening conference, they should state the reason for the inspection. Inspections can be conducted for several different reasons, including employee complaints, accident investigations, referrals from other agencies, situations of imminent danger, or just randomly scheduled inspections. The reason for the inspection will dictate the scope of the inspection. Inspections scheduled as the result of complaints, referrals, or accidents should be limited in scope, not a wall-to-wall inspection of the entire facility. But it is important to understand that anything the CSHO sees in plain view is fair game for a violation. A limited-scope inspection may be expanded to a comprehensive inspection if there are many plain-sight violations; so if the inspection is the result of an employee complaint about equipment hazards in a machine shop, take the CSHO on the most direct and hazard-free route possible to the machine shop. Do not go on a tour of the entire facility to show off how well maintained it is.

One of the employer’s rights that should be explained during the opening conference is your right to accompany the CSHO during the inspection (as well as an employee representative). You should absolutely exercise that right. Never turn a CSHO loose in your workplace. A company representative, preferably a Safety Manager, should be in the CSHO’s back pocket the entire time. The purpose is not to disrupt or interfere in any way, but to document everything that happens during the inspection. Take lots of notes, duplicate any pictures the CSHO takes, verify any measurements, and make note of any alleged violations.

During the walk-around, the CSHO may request to speak to employees privately, which they have the right to do under the OSH Act. It is a good practice to debrief employees on their interviews, but only if they are willing. They will have been informed that they do not need to reveal their conversation and, further, that they have legal protection in the event of any kind of retaliation from the employer. In fact, any employees who participate with an OSHA inspection, including those who file complaints, have protections under the OSH Act and can file a whistleblower complaint for any retaliation. You would be wise to seek legal counsel before taking any adverse employment action resulting from an OSHA inspection.

One last tip: During the inspection, correct any violations that are pointed out during the walk-around, if possible. This does a couple of things. First, it shows good faith on your part and can result in a penalty reduction if a violation is recommended. Also, if the hazard results in a violation, it will be listed as “Corrected During Inspection” on the citation. Any hazards not immediately corrected will have an abatement date by which they must be corrected. This can lead to follow-up inspections, and if the hazards are still not corrected then, it can result in the very expensive Failure to Abate penalties mentioned at the beginning of this article.

Good luck if OSHA does show up, but remember the advice from Benjamin Franklin: An ounce of prevention is worth a pound of cure. Focus your time and efforts on improving safety and health conditions at your worksite, and hopefully you will not have to worry about “getting out of” OSHA violations.