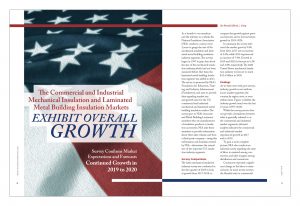 As a benefit to our members and the industry as a whole, the National Insulation Association (NIA) conducts a survey every 2 years to gauge the size of the mechanical insulation and laminated metal building insulation industry segments. The surveys began in 1997 to gain data about the size of the mechanical insulation industry, which had not been measured before that time; the laminated metal building insulation segment was added in 2013. The survey is sponsored by NIA's Foundation for Education, Training, and Industry Advancement (Foundation), and aims to provide data regarding market size and growth rates for the U.S. commercial and industrial mechanical and laminated metal building insulation market. The survey goes to NIA’s Associate and Metal Building Laminator members who are manufacturers of insulation products or insulation accessories. NIA asks those members to provide information about their sales volume, and then a third-party company—using this information and formulas created by NIA—determines the annual size of the respective U.S. insulation industry segments.

The latest mechanical insulation industry survey was conducted in the first quarter of 2019 to look at growth from 2017–2018, to compare that growth against previous forecasts and to forecast future growth in 2019–2020.

As we have seen with past surveys, industry growth is not uniform across market segments, the country, by region, state, or even within states. Figure 1 exhibits the industry growth trend over the last 21 years (1997–2018).

To gain a more complete picture, NIA also conducts an informal survey regarding the ratio of labor to material among contractors, and sales margins among distributors and contractors.

Contractors reported a significant change in the labor to material ratio. In more recent surveys, the blended ratio in commercial and industrial industry segments, across all projects (new construction and maintenance) and type of contracts was estimated to be 72% labor and 28% material (72/28 ratio). The ratio changed to 71/29 in 2017 and 70/30 in 2018. The 2017 and 2018 ratios changed due to changes in both fields, with industrial having a stronger change.

The change is believed to be driven by a combination of the use of higher-cost insulation systems, major price increase adjustments with many materials driven by tariffs, raw material and freight cost, and a larger number of projects utilizing multiple layer/complex insulation systems specifically for cryogenic applications.

The survey indicated that, on a national basis, there was gross margin improvement in both the distribution and contractor channels. More significant improvement was reported with this survey than in other recent surveys. This was expected and is not an uncommon occurrence when revenue opportunities are abundant—especially combined with a shortage of qualified workers.

With improving margins at the distributor and contractor levels, one might expect that the manufacturing segment experienced similar results, though we cannot know for certain since the survey looks exclusively at manufacturing sales volume.

Figure 2 illustrates the industry growth percentage year to year. 2005 marked a high, with a 22.9% annual growth rate, while 2009 represented a decline of 27.7%. Annual fluctuations are to be expected and are caused mainly by changes in the overall economy. When analyzing the data in comparison to the economy, one needs to take into consideration that, due to construction cycles, the industry typically trails the economy between 9 and 15 months. The compounded annual growth rate—which refers to industry growth over the entire period—is 2.8%, while the average annual growth rate over that period is 3.7%. The average growth rate over the last 5 years is 3.1%.

Beginning with the 2013–2014 survey, the survey respondents provided their forecasted growth over the preceding 2 years. The current survey indicates an expected average industry growth of 6.2% in 2019 and 4.8% in 2020.

The 2020 forecast had a similar variance, from 3% to 9%. Without the high and low percentage, the average was 4.6%. The forecast was split evenly between unit and dollar growth.

Actual industry results were below forecasted levels for both 2017 and 2018. That difference was greatly impacted by the labor/material ratio change. If the same ratio would have been in effect for 2017, the results would have been 96.4% of forecast and 2018 would have equaled the forecast of $11.9 billion dollars.

Analysis of survey results is always subject to individual interpretation. In this case, considering the high-level basis of the forecast and the methodology employed to determine the survey results, the comparison of actual results versus the forecast is worthy of discussion.

Unfortunately, the survey methodology does not allow for differentiation between increases in unit or dollar growth or between industry segments. Based upon the informal survey results, both market segments had growth in 2017 and 2018. Unit growth may have been higher in 2017 than dollar growth, but 2018 may have seen more dollar growth.

The recent survey exhibited a similar ratio of accessory materials in comparison to primary core insulation materials. That may be indicative of more expensive finishing systems that are traditionally utilized in the industrial market being offset by the use of high-cost insulation systems.

Facility or shop fabrication hours of labor and related accessories/consumables were included in this survey, whereas prior to 2015 they were excluded. That addition had less than one tenth of a percent (.1%) impact on the results. All previous survey results have been adjusted to include a similar impact for year-over-year comparisons.

While survey results may be subject to interpretation, below are considerations and possible conclusions suggested by survey data.

The mechanical insulation market continues to exhibit compounded growth over an extended period. While some market segments may fluctuate year over year, and occasionally the overall market may experience a decline, the industry has experienced a 2.8% compounded annual growth rate over 22 years, and a 3.1% growth rate over the last 5 years (2014–2018). As unpredictable and vulnerable to outside influences as the commercial and industrial construction industry seems, those compounded growth rates indicate the mechanical insulation industry continues to stand the test of time, and the future is looking bright.

The survey's goal is to provide valuable data regarding market size and growth rates for the U.S. laminated metal building insulation market. The NIA members who participated in the survey provided information to an independent, third-party company. The company took that information and applied a formula created by NIA to extrapolate the annual size of the laminated metal building insulation industry in the United States. The latest survey was conducted in the first quarter of 2019 to determine industry growth from 2017 through 2018 and to obtain an indication of estimated growth for 2019 and 2020.

In the 4 years that the survey has included forecast information, the actual results have exceeded forecasts by an average of 13.2%. That indicates the markets have been stronger than anticipated, or perhaps some responders are underreporting. Regardless, that trend is nothing less than impressive; if it continues, the market will exceed $600 million in 2022.

As with the mechanical insulation survey, the results of the Laminated Metal Building Insulation Industry survey are subject to individual interpretation. The following paragraphs offer survey considerations and possible conclusions suggested by survey data.

Results from both survey segments show continued growth. The laminated metal building insulation
market continues to sustain impressive annual growth and if that trend continues, the industry could reach the $500 million plateau by 2020. 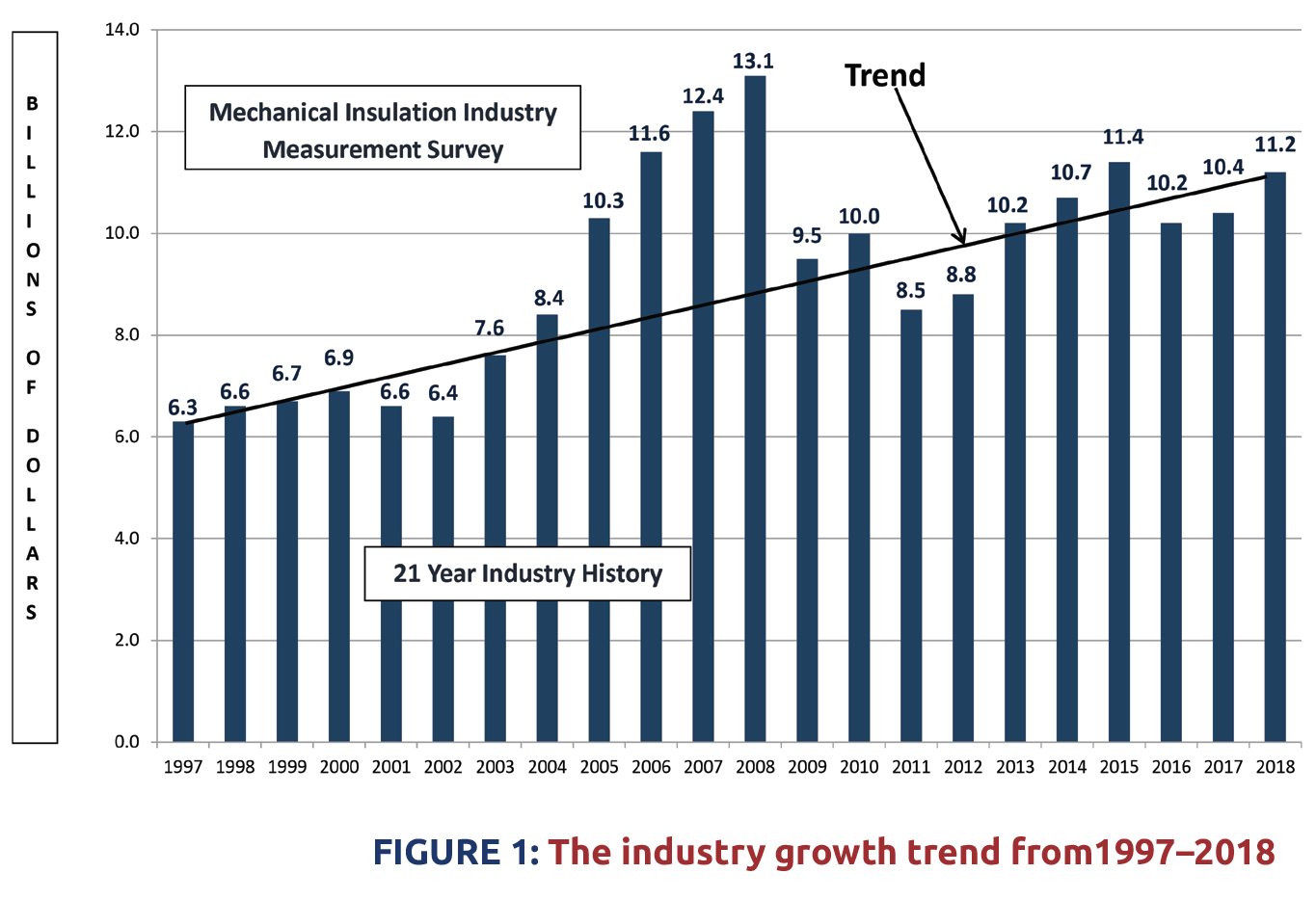 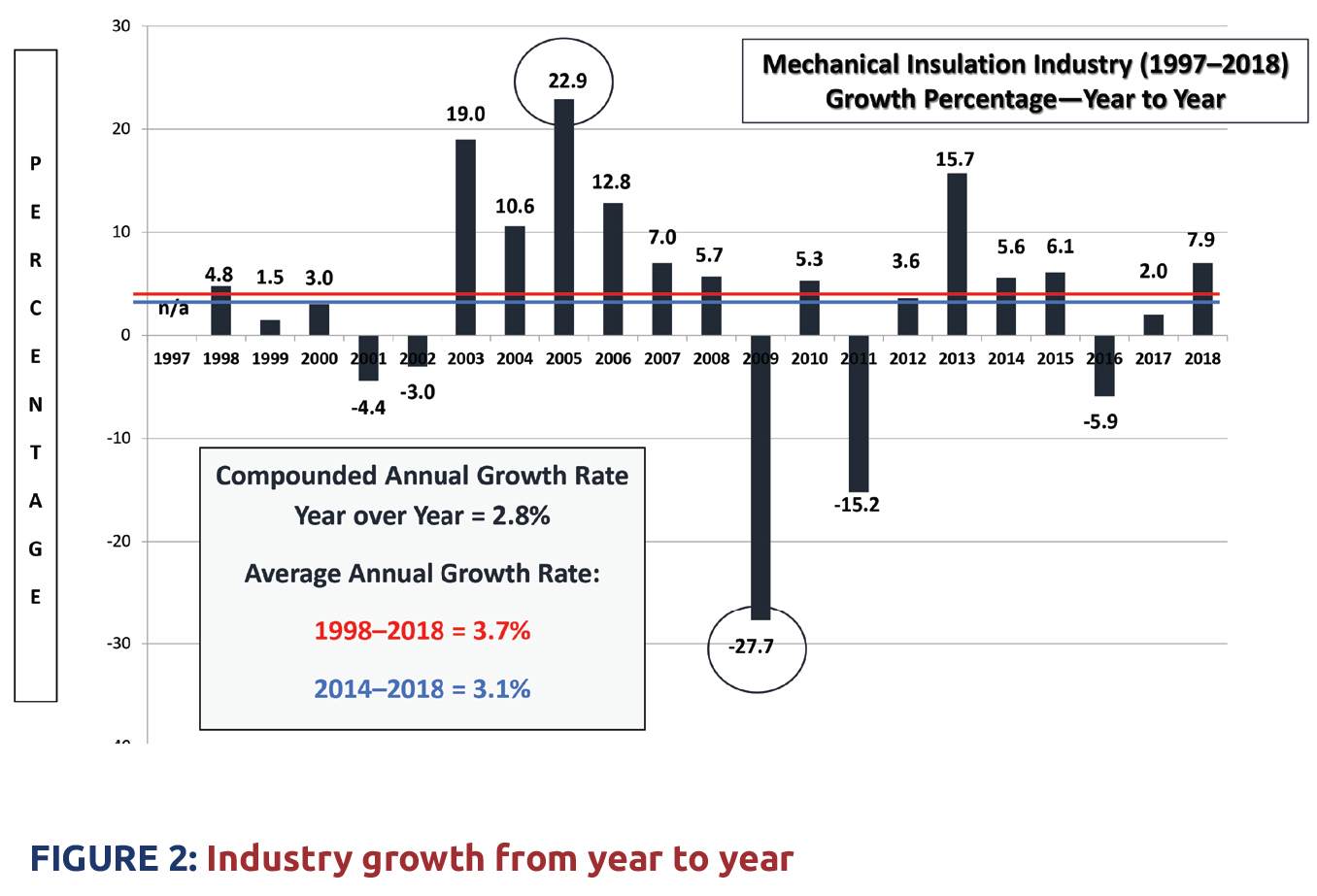 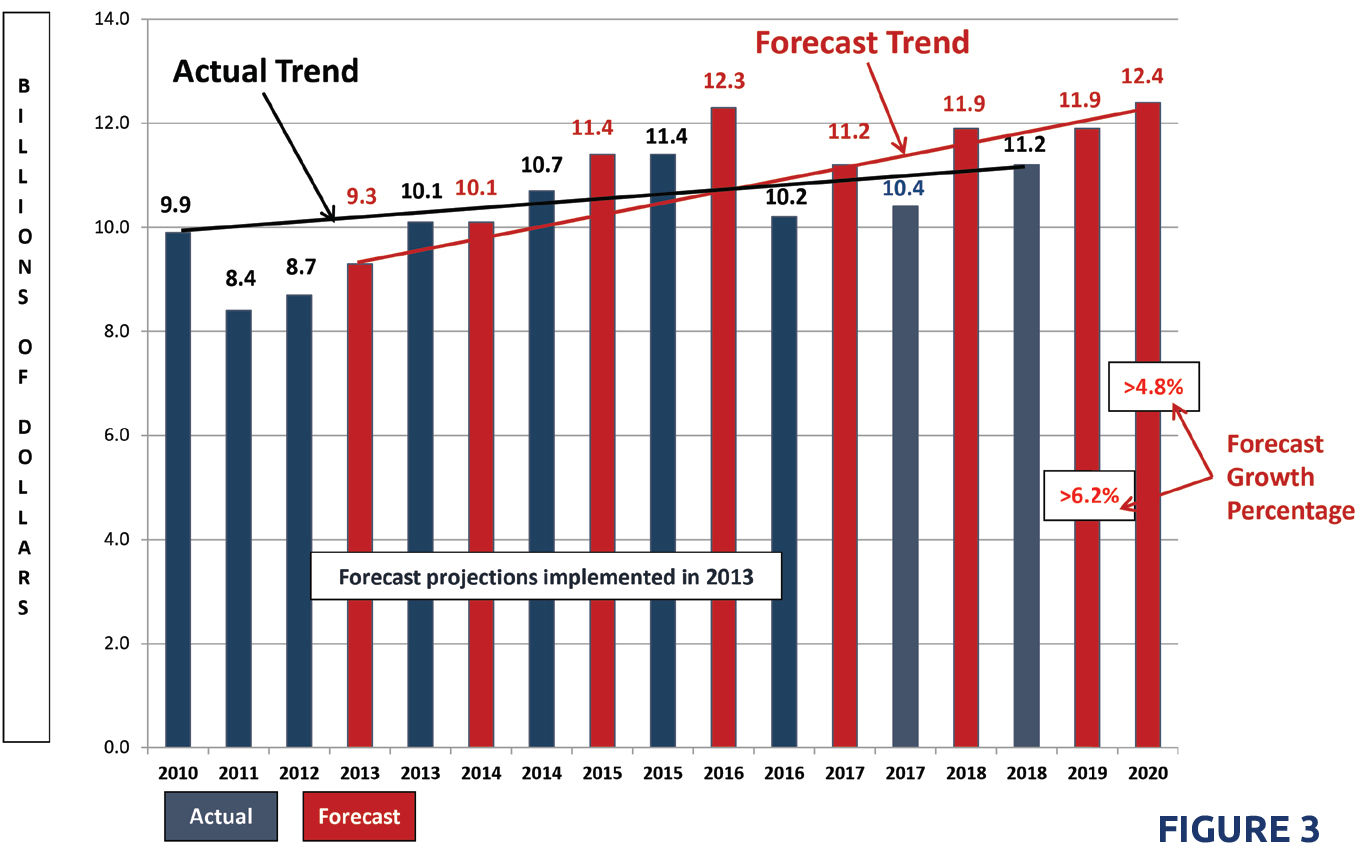 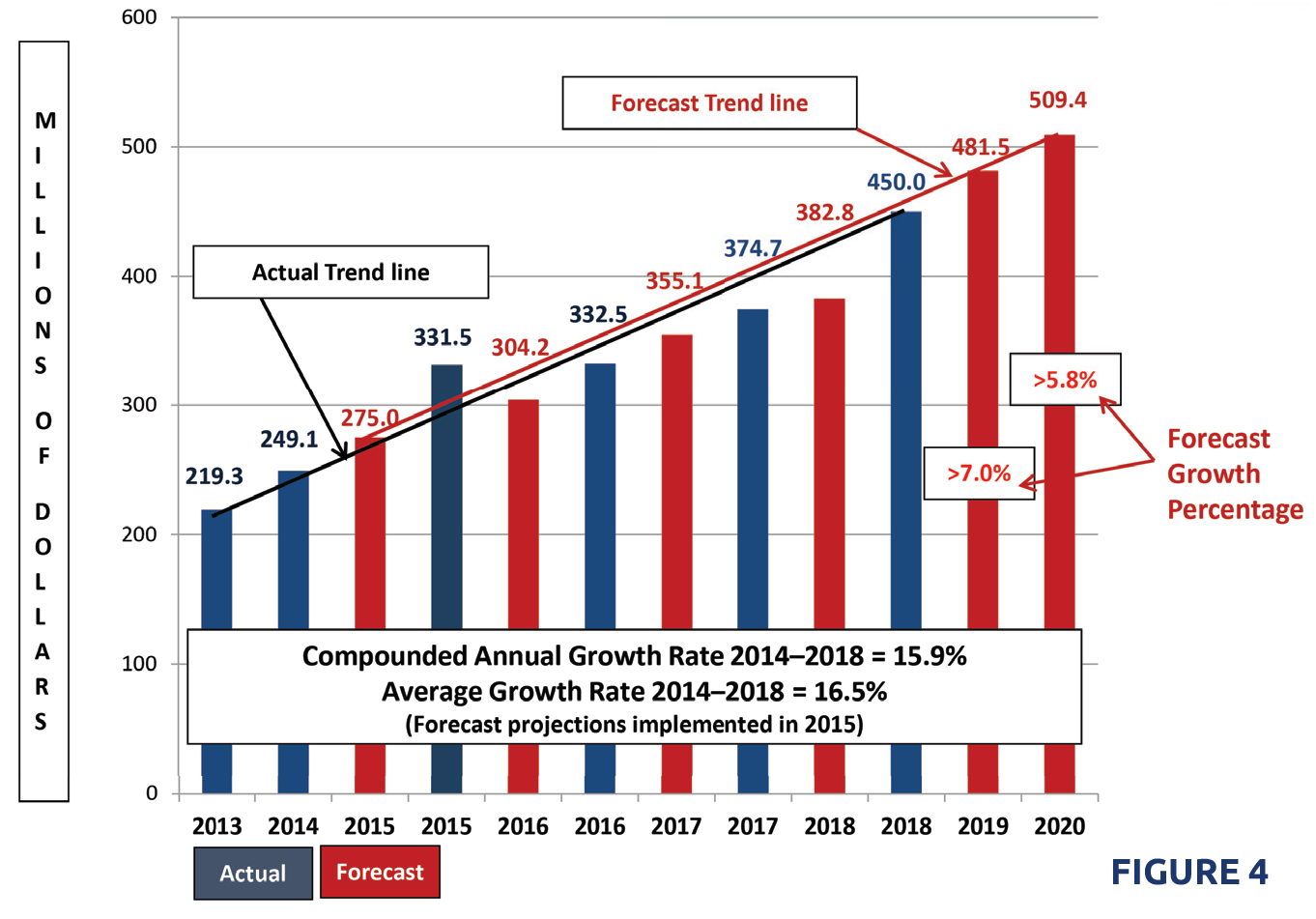