Amy C. Mitchell is a Director with Auman, Mahan & Furry in Dayton, Ohio. She concentrates her practice in the area of labor and employment and has been certified as a specialist in labor and employment law by the Ohio State Bar Association. Matthew Bakota is a member of Auman, Mahan & Furry’s Labor and Employment Group. He is also certified as a Professional in Human Resources (PHR) through the HR Certification Institute (HRCI), and as a Civil Rights Investigator through the Association of Title IX Administrators (ATIXA). Ms. Mitchell can be reached at acm@amfdayton.com and Mr. Bakota can be reached at mjb@amfdayton.com or 937-223-6003. 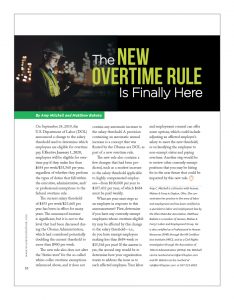 On September 24, 2019, the U.S. Department of Labor (DOL) announced a change to the salary threshold used to determine which employees are eligible for overtime pay. Effective January 1, 2020, employees will be eligible for overtime pay if they make less than $684 per week/$35,568 per year, regardless of whether they perform the types of duties that fall within the executive, administrative, and/or professional exemptions to the federal overtime rule.

The current salary threshold of $455 per week/$23,660 per year has been in effect for many years. The announced increase is significant, but it is not to the level that had been discussed during the Obama Administration, which had considered potentially doubling the current threshold to more than $900 per week.

The new rule also does not alter the “duties tests” for the so-called white-collar overtime exemptions referenced above, and it does not contain any automatic increase to the salary threshold. A provision containing an automatic annual increase is a concept that was floated by the Obama-era DOL as part of a new overtime rule.

The new rule also contains a few changes that had been predicted, such as a modest increase to the salary threshold applicable to highly compensated employees—from $100,000 per year to $107,432 per year, of which $684 must be paid weekly.

What are your next steps as an employer in response to this announcement? First, determine if you have any currently exempt employees whose overtime eligibility may be affected by this change to the salary threshold—i.e., do you have exempt employees making less than $684 week or $35,568 per year? If the answer is yes, the second step would be to determine how your organization wants to address the issue as to each affected employee. Your labor and employment counsel can offer some options, which could include adjusting an affected employee’s salary to meet the new threshold, or reclassifying the employee to non-exempt status and paying overtime. Another step would be to review other currently exempt positions that you may be hiring for in the near future that could be impacted by this new rule.