Laurie Cowin joined the Construction Dive team with a decade of experience in commercial and residential design and construction writing. She graduated from Ohio University with a B.S. in Journalism. She may be reached at lcowin@industrydive.com.

Drug overdoses claimed more than 64,000 American lives in 2016, which is nearly double the amount only a decade ago. Theories vary about the reasons behind the dramatic increase, although many attribute it to doctors prescribing opioid medications more frequently. Despite stagnant levels of reported patient pain, prescription opioid sales to pharmacies, hospitals, and doctors’ offices nearly quadrupled from 1999 to 2010. 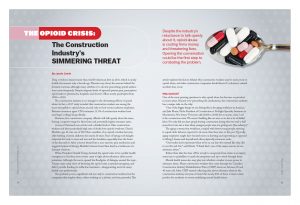 However, few construction company officials will talk openly about the issue, fearing a negative image for their firms and potentially higher insurance rates.

A recent Cleveland.com article took a detailed look at Ohio construction workers and their particularly high rate of death from opioid overdoses. Daniel Macklin, age 40, was one of 500 Ohio casualties of an opioid overdose last year, after battling a heroin addiction for nearly 20 years. Years of laying roof shingles subjected his body to wear and tear and his shoulders, especially, bore the brunt of the discomfort. After a doctor denied him a non-narcotic pain medication and suggested physical therapy, Macklin’s fiancée found him dead in a bathroom of a fentanyl overdose.

When President Donald Trump declared the opioid crisis to be a public health emergency in October, more stories came to light about substance abuse across industries. Although the move opened the floodgates of dialogue around the topic, Trump came a play short of declaring the opioid crisis a national emergency, and didn’t provide funding for addiction treatment—disappointing news for many health-care professionals.

The epidemic poses a significant risk not only to construction workers, but the companies that employ them, others working on a jobsite, and even passersby. This article explores the factors behind why construction workers may be more prone to opioid abuse, and what construction companies should know if a substance-related accident does occur.

One of the most pressing questions is why opioid abuse has become so prevalent in recent years. Beyond over-prescribing the medications, the construction industry has a unique take on the why.

“One of the bigger things we see driving this is the aging workforce in America,” said Jake Morin, Niche President of Construction at ProSight Specialty Insurance in Morristown, New Jersey. “Everyone calls [2008 to 2010] the economic crisis; I call it the construction crisis. We weren’t building like we were so we lost a lot of skilled labor. Not only did you have people leaving construction during that two-and-a-half years, but it was also a time when younger people were not getting into [the industry].”

The aging construction workforce, coupled with fewer young people entering it, equals older laborers expected to do more than they were in the past. Typically, aging employees might have focused more on drawing and supervising as opposed to lifting I-beams and drywall and other physically strenuous work.

“Our bodies don’t rejuvenate when we’re on our late 40s onward like they did in our 20s and 30s,” said Morin. “I think that’s one of the major reasons we see substance abuse.” Rather than take the time off for a body to recuperate from strain or an injury, some turn to painkillers to mask the symptoms and try to work through them.

Mental health issues also may play into whether a worker is more prone to substance abuse. Many construction workers who come through the Canadian Construction Industry Rehabilitation Plan’s (CIRP) doors are between 30 and 40 years old. After CIRP started collecting data about substance abuse in the construction industry last year, it found that nearly 83% of those it treats screen positive for moderate to severe underlying mental health issues.

Although many companies require drug testing before finalizing an employment offer and some do random testing, drug tests on a jobsite can be complicated, explained David Pfeffer, Chair of the Construction Practice Group at New York-based law firm Tarter Krinsky & Drogin.

“As an owner or developer, you’re often dealing with people who aren’t your employees, but are employees of many companies, subcontractors, and sub-subcontractors,” he said.

Numerous contacts were made with construction companies about their experiences with opioid abuse among their workers and subcontractors, but all declined to be interviewed for this story.

Pfeffer said while addiction is problematic in many industries, jobsites are physically dangerous. “When you have construction workers under the influence, whether it be alcohol or illegal drugs, you’re putting not only that worker at tremendous risk, but you’re putting his coworkers and the general public or passersby at risk,” he said. “There is a real issue, and I think it’s something that should be revisited from a protection point of view.”

Close camaraderie among colleagues means they’re reluctant to report any abuse they see. “Sometimes, it takes OSHA being on site or the Department of Buildings demanding a urinalysis or blood sample for proper protocol to be followed,” Morin said. “These men and women take care of themselves. It’s a team effect when you’re on a jobsite with a lot of ‘It could’ve been me’ mindsets.”

Morin also raised the question of how to define what drug abuse is and isn’t. He questioned if certain drugs might be safer than others. For example, is medical marijuana better than Oxycontin, a prescription opioid pain medication? Are higher doses of prescribed Advil, an over-the-counter pain reliever, better than Vicodin, another opioid?

“Is there something we should be looking at as a country where we start ranking these drugs in a different order or fashion instead of lumping them all together?” he asked.

Morin suggested that if an individual is on a heavy-duty painkiller short-term that the worker could be moved to a safer area of the jobsite or temporarily to a desk job. “I do think that’s a way to combat it and why unions and associations have rehab protocols in place if you were to test positive,” he said.

As with so many legal issues, if there is a problem on a jobsite, next steps regarding liability depend on the jurisdiction. New York, for example, has Labor Laws 243 and 241, which make owners strictly liable for accidents that occur as a result of their projects or projects, said Pfeffer. The industry has passed off liability through insurance and indemnification requirements, which the lawyer said, are “written indemnification clauses between the owner and contractor, whereby a contractor promises to indemnify, defend, and hold harmless the owner of a construction project for site accidents that may occur as a result of contractor’s or subcontractor’s work on a project.”

Pfeffer has seen cases proceed to litigation, which generally involve site accidents with allegations of employee drug or alcohol abuse. If a plaintiff can show the employer knew about the situation, then there can be punitive damages levied that otherwise may not exist. “There are varying levels of liability,” he said. Morin explained a contractor’s general liability insurance would cover damages if an under-the-influence worker injures someone in an accident.

“If someone drops an I-beam, their employer is now responsible for property damage and bodily injury it caused,” he said, adding the building owner could also be responsible for property damage and bodily damage. But, he said, take the scenario one step further: “Depending on the type of job that individual had, such as a crane operator, they could be held criminally liable for their act. If they killed someone it could turn into a manslaughter case.”

Most states have employee at-will status so employment can be terminated at any time. But in construction, many employment agreements are through unions, which involve a contract that the employer must honor. Pfeffer noted that those contracts do include protective language for the employer, such as if an employer has reason to believe an employee is doing illegal drugs or drinking alcohol onsite, that worker cannot come onsite and there may be an investigation. Some electrical companies Pfeffer knows of have a contract with a “2 strikes and you’re out policy.”

Prevention, of course, may be the best medicine.

This article was published in the December 2018 issue of Insulation Outlook magazine. Copyright © 2018 National Insulation Association. All rights reserved. The contents of this website and Insulation Outlook magazine may not be reproduced in any means, in whole or in part, without the prior written permission of the publisher and NIA. Any unauthorized duplication is strictly prohibited and would violate NIA’s copyright and may violate other copyright agreements that NIA has with authors and partners. Contact publisher@insulation.org to reprint or reproduce this content.

Reprinted with permission from Construction Dive.

The July issue of Insulation Outlook featured an article about heat stress due to the serious nature of this concern and the correspondingly strict stance the Occupational Safety and Health Administration (OSHA) has taken on heat stress prevention. OSHA had informed construction industry employers that if they did not have a heat stress program in