The Tax Cuts and Jobs Act

Mark E. Battersby is a freelance writer who has specialized in taxes and finance for the last 25 years. Working from offices in the suburban Philadelphia community of Ardmore, Pennsylvania, Mr. Battersby currently writes for publications in a variety of fields, syndicates 2 weekly columns that appear in over 65 publications, and has written 4 books. He can be reached at MEBatt12@Earthlink.net.

Are you ready for tax “reform?” Thanks to the recently passed Tax Cuts and Jobs Act (TCJA), the tax rate for incorporated businesses will be reduced from its current 35% to 21% for the 2018 tax year and thereafter. Although the business tax cuts are—for the most part—permanent, the tax cuts for individuals are only temporary, expiring in 2026. The big news is what the TCJA will mean to those in the mechanical insulation and construction industries, and their customers and clients. 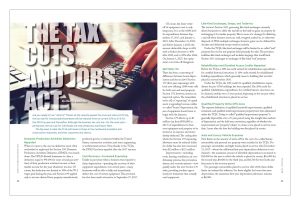 When it comes to the one tax deduction most often overlooked or neglected, the Section 199, Domestic Production Activities Deduction (DPAD), won hands down. The DPAD allowed businesses to claim a deduction equal to 9% (6% for some oil and gas activities) of their production activities’ income or their taxable income for the year, whichever was less. Of course, the deduction was limited to 50% of the W-2 wages paid during the year, and Section 199 applied only to income derived from property manufactured, produced, grown, or extracted within the United States; construction activities; and some engineering or architectural services. Now, thanks to the TCJA, the DPAD has been repealed after the 2017 tax year.

Unlike in past years when a business was required to claim depreciation—spreading the recovery of their equipment expenditures over several years—many businesses will be able to fully and immediately deduct the cost of certain equipment. This provision has also been made retroactive to September 27, 2017.

There has been a narrowing of differences between bonus depreciation and the tax law’s Section 179 (first-year expensing), with both now offering 100% write-offs for both new and used property. Section 179, however, remains an improved option. The immediate write-off, or “expensing” of capital assets is appealing because, unlike so-called “bonus” depreciation, the use of equipment doesn’t have to begin with the business.

Section 179 allows up to $1 million (up from $500,000 in 2017) of expenditures for business equipment and property to be treated as an expense and immediately deducted. The ceiling after which the Section 179 expensing allowance must be reduced dollar-for-dollar has also been increased from $2 million to $2.5 million.

The tax law’s Section 1031 governing like-kind exchanges currently allows businesses to defer the tax bill on the built-in gains in property by exchanging it for similar property. This is more of a strategy for deferring a tax bill when business assets are sold, swapped, traded-in, or otherwise disposed of. With multiple exchanges, however, gains can be deferred for decades and ultimately escape taxation entirely.

New limits on the amount of write-off for the cost of so-called luxury automobiles and personal use property were included in the TCJA. For passenger automobiles and light trucks placed in service after December 31, 2017—where the additional first-year depreciation deduction is not claimed—the maximum amount of allowable depreciation is increased to $10,000 for the year in which the vehicle is placed in service, $16,000 for the second year, $9,600 for the third year, and $5,760 for the fourth and later years in the recovery period.

Similar rules apply not only to passenger automobiles, but to any property used as a means of transportation, or property used for purposes of entertainment, recreation, or amusement. Computers and peripheral equipment have been removed from the definition of listed property and are no longer subject to the increased substantiation requirements applying to listed property.

In the past, with a few exceptions, interest was usually tax deductible with the tax laws protecting the ability of small businesses to write-off the interest on loans. In an attempt to “level the playing field” between businesses that capitalize through equity and those that borrow, the TCJA caps the interest deduction to 30% of a business’s adjusted taxable income.

Every business is subject to disallowance of the deduction for net interest expense in excess of 30% of the operation’s adjusted taxable income. A special rule applies to pass-through entities that requires the 30% determination to be made at the entity level rather than at the tax filer level. In other words, at the partnership level instead of the partner level.

Other exceptions exist for small businesses, generally those with gross receipts that have not exceeded a $25-million threshold for a 3-year period, to protect their ability to write off the interest on loans that help them start or expand a business, hire workers, and increase paychecks.

The tax law’s Section 1031 governing like-kind exchanges currently allows businesses to defer the tax bill on the built-in gains in property by exchanging it for similar property. Although more a strategy for deferring a tax bill when business assets are sold or otherwise disposed of, with multiple exchanges, gains can be deferred for decades and ultimately escape taxation entirely.

One of the main benefits of net operating losses (NOLs) was the fact that they could be carried back to more prosperous years, creating a refund of taxes paid in those earlier years and providing an immediate infusion of badly-needed cash. Today, the NOL deduction has been severely limited. The write-off is now limited to 80% of an operation’s taxable income; a NOL carryback is only permitted in special cases. There is no limit on how far forward NOLs may be carried.

The simplification of the rules governing the method of accounting that must be used for tax purposes is a welcome option. Businesses with average annual gross income of less than $25 million may now use the simple cash-basis accounting method.

Accrual basis taxpayers include amounts in income when all the events have occurred that fix the right to receive income can be determined with reasonable accuracy. This can occur when a bill is sent out or a contract signed. Cash basis taxpayers, on the other hand, generally include amounts in income when actually or constructively received. Most individuals are on the “cash” basis, counting a payroll check as income when received, while a business counts income when payment is received—not when billed.

A number of exceptions exist to permit deferral of income received as advance payments. An advance payment is where the business receives payment before the goods or services are provided to a customer. The rules now allow tax deferral to mirror financial accounting deferral, where income is recognized as the goods are provided or the services performed.

In terms of qualifying to use the cash method of accounting, the current $5 million threshold for corporations and those partnerships with a corporate partner is increased to $25 million, and the requirement that such businesses satisfy the $25 million limits for all prior years has been repealed. The average gross receipts test will now be indexed to inflation.

Pass-through businesses operating as partnerships, limited liability companies (LLCs), S corporations, and sole proprietorships, pass their income to their owners, who pay tax at the individual rate. The TCJA created a 20% deduction that applies to the first $315,000 of income (half that for single taxpayers) earned by businesses operating as S corporations, partnerships, LLCs, and sole proprietorships.

All businesses under the income thresholds, regardless of whether they’re service professionals or not, can take advantage of the 20% deduction. For pass-through income above this level, the new law provides a deduction for up to 20%, but only for “business profits,” reducing the owner’s effective marginal tax rate to no more than 29.6%.

The TCJA contains strong safeguards to ensure that so-called “wage income” does not receive the lower marginal tax rates for business income. Thus, that 20% deduction applies only to business income that has been reduced by the amount of “reasonable compensation” paid the owner. Although lawmakers know what is “excessive,” “reasonable” compensation has not been defined yet.

Don’t forget those “fringe benefits” of both employees and bosses. The new law “disallows” deductions for entertainment expenses, eliminating the necessity of attempting to prove whether such expenses are sufficiently business- or practice-related. The 50% limit on the deductibility of business meals has been expanded to include meals provided through an in-house cafeteria or otherwise on the premises of the business.

A business’s deduction for fringe benefits such as transportation (e.g., parking and mass transit) is no more, although such benefits received by an employee—even the business’s owners and shareholders—continue to be excluded from the recipient’s income.

Obviously, there are many more changes contained in the massive TCJA. S corporations attempting to convert to regular C corporations will face new rules; Section 199, the deduction for so-called “domestic production activities,” has been repealed; and partnerships will no longer terminate upon the death or exit of a partner.

The corporate Alternative Minimum Tax has been repealed, deductions for local lobbying expenses are gone, and the estate tax exemptions under so-called “death tax” have been doubled, although they will sunset in 2026.

According to some of our lawmakers, the TCJA modernizes our international tax systems, making it easier and far less costly for U.S. businesses to bring home foreign earnings. They also say the international provisions of the TCJA aim to prevent U.S. jobs, headquarters, and research from moving overseas by eliminating incentives.

Overall, however, the TCJA appears to favor businesses over individuals with longer-lived tax savings for the former. Unfortunately, with few exceptions, the potential savings won’t be seen by businesses until the tax bill for 2018 comes due.

This article was published in the February 2018 issue of Insulation Outlook magazine. Copyright © 2018 National Insulation Association. All rights reserved. The contents of this website and Insulation Outlook magazine may not be reproduced in any means, in whole or in part, without the prior written permission of the publisher and NIA. Any unauthorized duplication is strictly prohibited and would violate NIA’s copyright and may violate other copyright agreements that NIA has with authors and partners. Contact publisher@insulation.org to reprint or reproduce this content.

It’s shaping up to be a landmark year for changes affecting both employers and employees. Many new laws and regulations sponsored by the Obama administration were recently enacted or will took effect in January 2017. Will they be rolled back? We will find out when Donald Trump begins to move forward on his policy objectives

On November 2, President Obama signed the Bipartisan Budget Act of 2015. This legislation included a provision calling for the Occupational Safety and Health Administration’s (OSHA’s) citation penalties to increase for the first time since 1990, and to be tied to the Consumer Price Index (CPI) for future annual increases. The Budget Act allows for

The Occupational Safety and Health Administration (OSHA) is currently escalating its inspection efforts. If your company has not yet experienced an OSHA inspection, chances are it will sooner rather than later. While in certain cases inspections may be random, oftentimes an inspection can be initiated by a disgruntled employee, or by well-publicized accidents. It is