In commercial buildings, air ducts are routinely used to distribute conditioned air to the various zones within the building. These duct systems carry heating, cooling, and/or ventilation air from a central location to the zones with the objective of providing for the health and comfort of the building occupants. Air systems vary in design and complexity, but insulation is routinely used on these duct systems to limit heat gains or heat losses and provide noise control.

Air systems are commonly categorized as either single-duct or dual-duct systems. Systems are further categorized as either constant air volume (CAV) or variable air volume (VAV) systems, depending on how the system adjusts to handle the changing zone loads. In general, a CAV system varies the supply air temperature in response to changes in load while keeping the air volume constant. VAV systems modulate the supply air volume while keeping the supply air temperature relatively constant. Many variations or “hybrid” systems are also used. This article will give a high-level overview of these systems. See the references at the end of this article for more details.

The simplest systems are the single-duct CAV systems with terminal reheat. A typical system is illustrated in Figure 1. Return air from the various spaces is drawn through the return ductwork system by a return-air fan and a fraction of this air is exhausted to the outdoors. The rest is recirculated and mixed with outdoor air to provide the required amount of ventilation. This mixed air is then filtered and conditioned (via heating and/or cooling coils) to the primary supply-air set point temperature (typically 55°F during the cooling season). The supply air is then distributed to the various zones throughout the building with a single duct supplying each zone. Terminal reheat boxes are installed near the end of these duct runs. Coils in these reheat boxes (either electric resistance, hot water, or in some cases steam) will “re-heat” the supply air to the temperature as required to satisfy the thermostat in each individual zone. 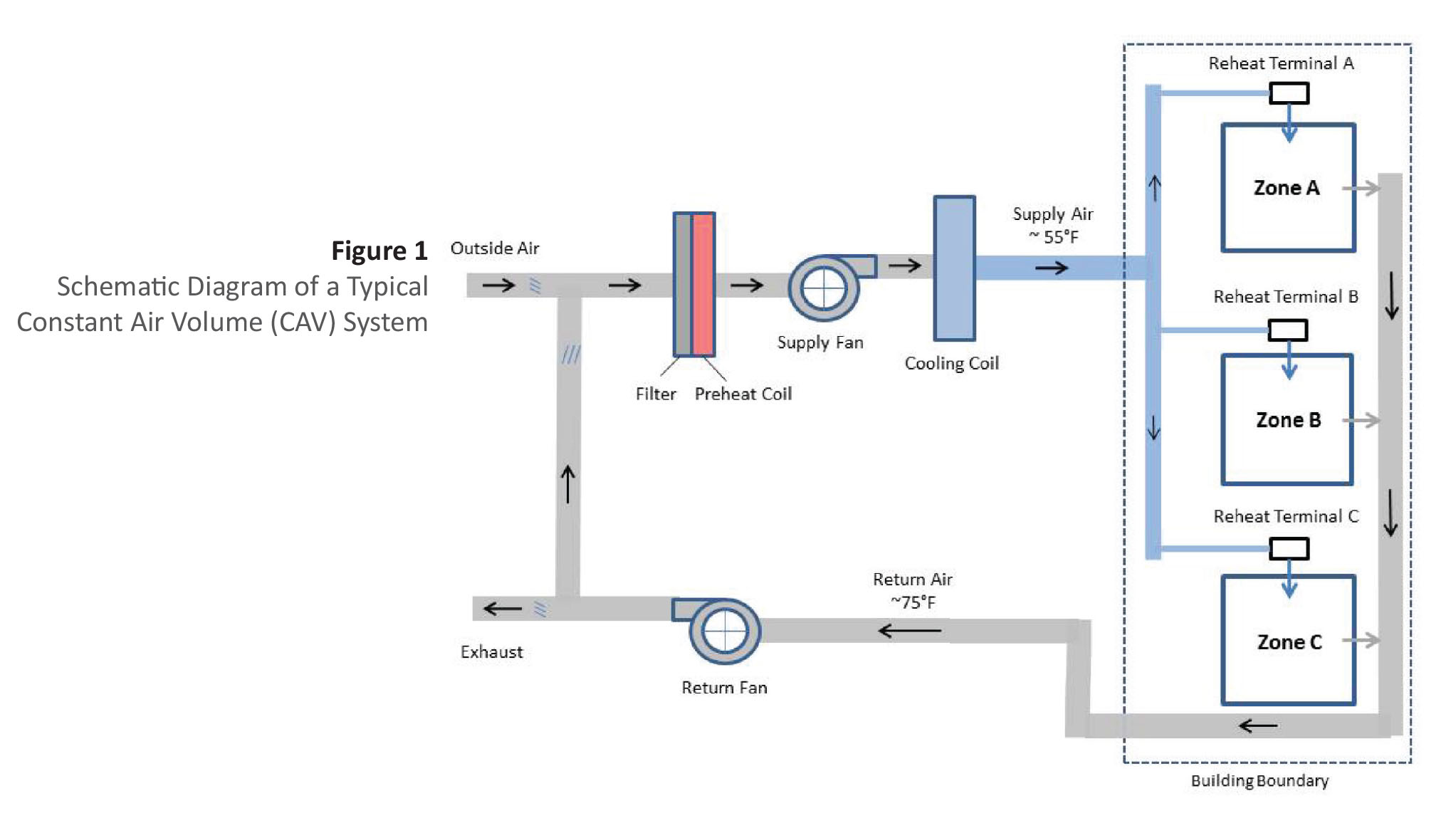 CAV reheat systems provide good temperature and humidity control and are relatively inexpensive to install. They are, however, somewhat inefficient, since energy must typically be expended first to cool and then (during non-peak periods) to reheat the supply air. Energy codes and standards generally limit the use of reheat systems to special situations (e.g., hospitals, laboratories, and other critical applications).

A more efficient alternative is the single-duct VAV system as shown in Figure 2. The general layout is similar to the single-duct CAV system, but in this case the reheat boxes are replaced with VAV boxes. Dampers in the VAV boxes modulate air flow rates to each zone in response to the zone load as sensed by the zone thermostat. The supply air temperature remains nearly constant.

VAV systems are generally more energy efficient since the volume of air is reduced during periods of low load. This saves conditioning costs as well as fan power. Variable speed supply and return fans are typically used to take advantage of the reduced airflow requirements. An issue with VAV systems is that, at times of low load, the VAV dampers may restrict the volume of supply air below the minimum required for proper air circulation and ventilation. To address this issue, VAV boxes are usually equipped or programed with minimum flow settings to prevent the supply air flow rate from going below the minimum requirement. When the zone load is small, the VAV box dampers go to the minimum setting and reheat coils energize to prevent overcooling the zone.

VAV systems are very common in commercial buildings. They are generally cost-effective in that only a single duct run is required to each zone. However, poor air circulation and the control of humidity levels are a potential problem at low-load conditions. A number of approaches are available to address these issues. 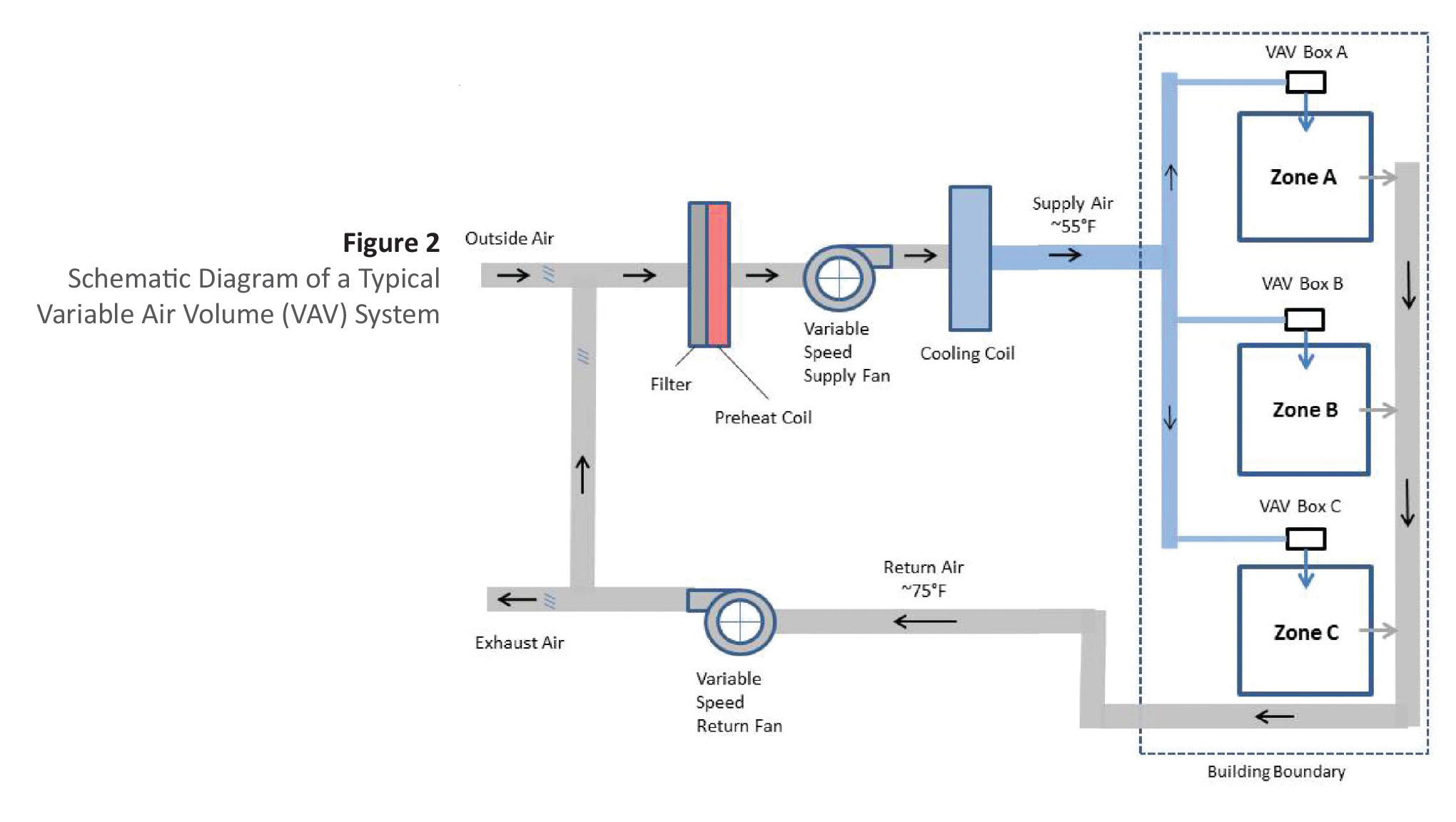 A dual-duct air system is illustrated in Figure 3. Supply air is split into 2 streams (the hot deck and the cold deck). For the hot deck, coils heat (and sometimes humidify) the air stream to a controlled temperature. The hot deck set-point temperature may be reset based on outdoor air temperature, but typically is around 95°F. Air in the cold deck is cooled and dehumidified to around 55°F. Separate ducts carry the air streams to mixing boxes located near the zones. The mixing boxes, controlled by zone thermostats, mix the hot air and cold air streams in the proper proportion to satisfy the zone load. Dual duct systems may be either CAV or VAV systems.

Dual-duct systems are generally costly to install since they require separate hot and cold duct runs. They are also relatively inefficient since at part-load conditions, the supply and return streams are working against each other. For these reasons, dual-duct systems have fallen out of favor in recent years, but many systems are installed in existing buildings. 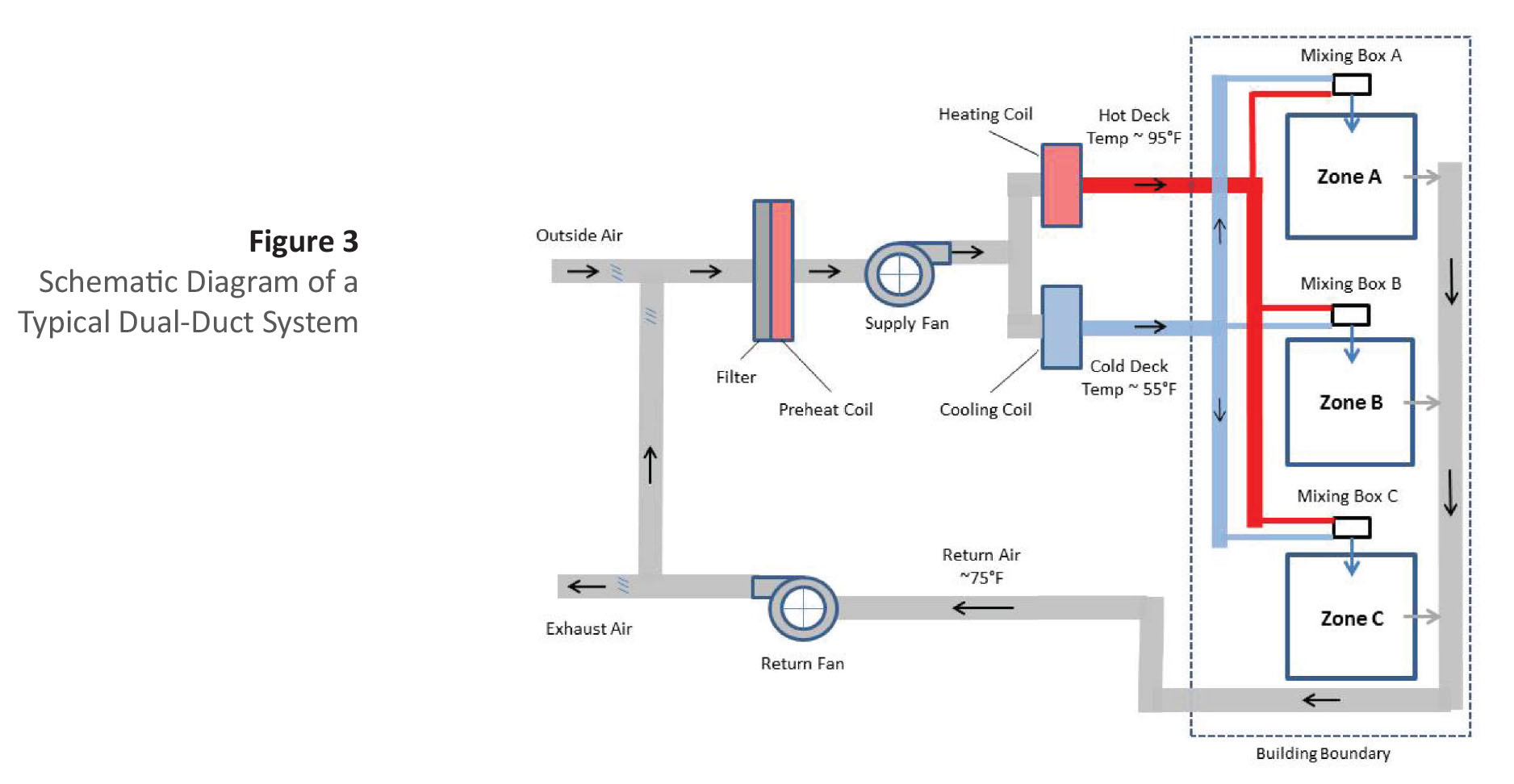 Insulation is typically specified on the supply air ductwork (both hot and cold) to limit heat loss/heat gain as well as to avoid condensation for cold ducts. The amount required will depend heavily on the location of the duct runs within the building. Various building energy codes and standards (ASHRAE Standard 90.1, the International Energy Conservation Code [IECC], California Title 24, etc.) address duct insulation levels required for energy efficiency, but do not address condensation control requirements. In general, any cooling ducts passing through spaces where the dew-point temperature of the surrounding air may exceed the temperature of the air in the duct should be insulated to prevent surface condensation. While typical supply-air temperatures are 50–60°F, more systems are being designed with lower temperatures (in some cases down to 40°F). Given the uncertainties of humidity control, especially during periods of system shutdown and/or nighttime setback, consideration should be given to insulating all cold air supply ductwork.

From an energy perspective, the level of duct insulation required depends mainly on where the ducts are located. All ducts located outside the building envelope should be well insulated. The 2015 IECC requirement is R-8 for climate zones 1 through 5 and R-12 for climate zones 5 through 8. For unconditioned spaces within the building, the temperature differences between the airstream and the ambient are moderated, and less insulation is required (the 2015 IECC requirement is R-6). Supply and return ducts passing through conditioned or indirectly- conditioned spaces generally do not require insulation because heat flows to or from the ducts largely go towards offsetting heat flows to or from the building envelope, so the impact on building energy usage is minimal.