Understanding the Boiler MACT Regulation for Area and Major Sources

Rarely is it that a specific environmental regulation
becomes so high profile as the recent Industrial Boiler Maximum Achievable
Control Technology (Boiler MACT) regulation, which has been the subject of
myriad bills that have come before the U.S. Congress. The Boiler MACT has been
cited as a clear division point between the two major political parties in the
United States, with the ultimate fate of facilities to be determined within
months after the election in November 2012. The political back and forth has
led to a limbo status for the major source regulation?with “major source”
defined by the U.S. Environmental Protection Agency (EPA) as “a stationary
source or group of stationary sources that emit or have the potential to emit
10 tons per year or more of a hazardous air pollutant [HAP] or 25 tons per year
or more of a combination of hazardous air pollutants.” This regulation will be
critical for those in the insulation trade: insulation is critical for
industrial boilers and process heaters as it is employed for the reduction of
heat loss and the increase of boiler efficiency; and it is one method of
reducing emissions outlined in the Boiler MACT regulation, potentially lowering
fuel costs and usage by enhancing the boilers’ steam system insulation.

The many recent changes to the Boiler MACT standards have
left industries confused and unsure of the reporting, testing, monitoring, and
further compliance measures that must be taken to operate within the standards.
In 2011 and 2012, the EPA released extensive revisions to the National Emission
Standards for Hazardous Air Pollutants (NESHAPs). The standards are divided
between 40 CFR Part 63 Subpart JJJJJJ for affected “area sources”?defined as
“any stationary source that is not a major source” ?and 40 CFR Part 63 Subpart
DDDDD for major sources, as defined by the respective air permits of the
facilities. Of the units affected by the regulation, the most rigorous emission
limits are assigned to those boilers and process heaters employing coal,
distillates, and biomass as fuels.

The regulations have had a bumpy recent history. A version of
the Boiler MACT standards was released in April 2010 and received over 4,800
comments from businesses and communities, some of which led to a change in
proposed subcategories and emission limits. In turn, the EPA published the
regulation into the Federal Register on March 21, 2011. The current final form
of the standard under Subpart JJJJJJ (with proposed amendments) was published
to the Federal Register on May 18, 2011. On March 13, 2012, the EPA issued a No
Action Assurance Letter for area sources. The EPA determined that further
public review was required for Subpart DDDDD and in May 2011, under the
authority of the Administrative Procedure Act, announced a delay of effective
dates of standards for major sources. On January 9, 2012, the U.S. District
Court for the District of Columbia, in Sierra Club versus Jackson, vacated the
EPA’s administrative stay of the Boiler MACT, thus making the March 2011 major
source standard effective. On February 7, 2012, the EPA issued a No Action
Assurance Letter for major sources. Currently, the EPA proposes to issue the
final rule before the compliance dates for existing sources.

The current Boiler MACT standards divide facilities’ boilers
into subcategories defined by boiler type, capacity, and fuel type. Based on
this information, a source must meet emission limits, work practice standards
(including tune-ups and energy assessments), and operating limits, and/or
demonstrate initial/regular compliance. Whether the facility is considered to
be new or existing also will determine if it is subject to the varying work
practice standards and requirements. Sources also are considered new if they
switch from one fuel to another (primary or secondary) that is applicable under
the regulation. Below are some critical facts regarding the current Boiler MACT
standards, how they may apply, and what impact they could have for your
facility.

Area
source requirements (40 CFR Part 63 Subpart JJJJJJ) affect facilities with the
potential to emit less than 10 tons per year (tpy) of any single HAP, and/or
less than 25 tpy of combined HAPs. These regulations affect sources with
boilers defined as existing, new, or reconstructed.

This rule covers boilers burning coal, oil, biomass, or
non-waste materials, but not solid waste as fuels. This also includes natural
gas-fired boilers if they use fuel oil as a backup. All other propane or
natural gas-fired boilers are exempt from the area source regulations. Also,
depending on status and fuel type, there are emission limits for mercury,
particulate matter (as a surrogate for non-mercury metals), and carbon monoxide
(as a surrogate for organic air toxics).

Another aspect of this subpart critical for existing sources
is timing for compliance. All area sources considered subject to JJJJJJ were
initially required to comply with emission limits or an energy assessment by
March 21, 2014, and work practice standards by March 21, 2012. A Notification
of Compliance to work practice standards (including a boiler tune-up) is due to
the EPA by July 19, 2012. However, under the No Action Assurance Letter, the
EPA extended the compliance and notification dates for initial tune-ups after
several deliberations (and many companies already achieving the preliminary
compliance date). Facilities have been granted a No Action Assurance by the
USEPA. This does not require subject facilities to meet the originally-stated
compliance deadline of March 21, 2012. It should be recognized that biennial
tune-ups must be conducted no more than 25 months after the previous tune-up.

For new sources, compliance must be achieved upon commencement
of operations. This includes submittal (within 30 days after operation of
subject equipment begins) of a Notification of Compliance Status to these
standards. If you are required to conduct performance tests, you are obligated
to submit a Notification of Compliance to the EPA within 60 days of completing
the performance test. Tables are included below to provide a basic overview of
what needs to be completed to meet the area source standard for boilers.

Major
source requirements (40 CFR Part 63 Subpart DDDDD) affect facilities with the
potential to emit greater than or equal to 10 tpy of any single HAP, and/or
greater than or equal to 25 tpy of combined HAPs. This rule includes boilers
and process heaters burning natural gas, fuel oil, coal, biomass (e.g., wood),
refinery gas, or other gas to produce steam. Unlike Subpart JJJJJJ, Subpart
DDDDD also includes natural gas/propane/clean fuel boilers. The requirements
contain subcategories with very specific requirements. Of the roughly 14,000
major source boilers and process heaters in the United States, 88 percent are
required to conduct annual or biennial tune-ups; and 12 percent are required to
meet emission standards if those standards are not already met. New and
existing natural and refinery gas units are subject to tune-ups every 2 years,
regardless of operating rate. Other affected boilers are subject to limits on
emissions of mercury, dioxin, particulate matter, hydrogen chloride, and carbon
monoxide, based on fuel type or combustion. Unfortunately, at the time of the
completion of this article, the final rule was not yet published. Therefore,
some of this information may change and should be confirmed before proceeding.
New proposals may see changes in the finalized version of the rule, to be
published later in 2012 or early 2013. Much of the outcome of this regulation
is seen to be determined by the outcome of the November 2012 presidential and
congressional elections.

For
all subject facilities, both major and area source, certain boilers also must
demonstrate continuous compliance through stack testing, continuous monitoring,
recordkeeping, and reporting. In addition, facilities must submit initial
notification and a Notification of Compliance Status within several months
(exact numbers and dates will be solidified and included in finalized
standards). For area sources, an Annual Compliance Certification report is due
by March 1 of each year. Recordkeeping requirements can include permits,
continuous monitoring data, deviation reports, fuel use, performance test,
energy assessment reports, tune-up documentation, stack test data, and any
site-specific monitoring plans.

It is critical to check with your state regulatory agency
before rushing to comply with some of these area source regulations. For
instance, in Indiana, a facility would not necessarily be subject to the
regulation if that facility has boilers that primarily run on natural gas, with
fuel oil as a backup fuel source. The exemption applies if you use fuel oil at
any time other than in a period of curtailment or during periodic testing (less
than 48 hours within a 12-month period). A period of curtailment refers to any
time when gas is cut off and it is beyond a facility’s control (e.g., during a
natural disaster). If a facility in Indiana has an air permit and this is not
explicitly stated in that permit, it may be wise to pursue a permit
modification stating that fuel oil is a backup fuel used strictly during periods
of curtailment or during periodic testing. While this specific regulatory
nuance applies to Indiana, individual state regulatory agencies should be
consulted to see if a similar detail may be applicable to your facility.

– A visual inspection of boiler or
process heater system

– An evaluation of operating
characteristics of the facility, specifications of energy-using systems,
operation and maintenance (O&M) procedures, and any unusual operating
constraints

– Review of facility energy
management practices and recommendations for improvement

There are many subtleties to these
regulations, and not everything is encompassed in this article. Also, there are
slight changes for these regulations on the horizon, including the number of
exemptions that exist for boilers at certain facilities. Clarifications and
additional information will be provided in a future article in 2013. 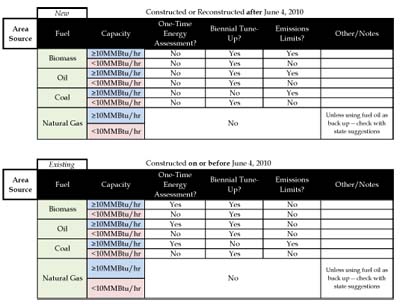