Why You Should Create a “Shadow Board” of Younger Employe

Jennifer Jordan, Ph.D., is a Social Psychologist and Professor of Leadership and Organizational Behavior at IMD. Her research focuses on power, ethics, leadership, and the intersection of these topics. Michael Sorell is a research associate at IMD. © 2019 Harvard Business Review. Reprinted with permission, accessed June 4, 2019, www.hbr.org. 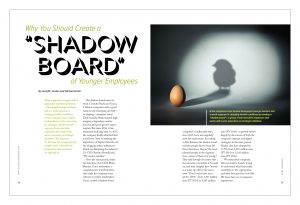 Many companies struggle with 2 apparently unrelated problems: 1. disengaged younger workers, and 2. a weak response to changing market conditions. A few companies have tackled both problems at the same time by creating a “shadow board”—a group of non-executive employees that works with senior executives on strategic initiatives. The purpose? To leverage the younger group’s insights and to diversify the perspectives that executives are exposed to.

The shadow boards seem to work. Consider Prada and Gucci, 2 fashion companies with a good track record of keeping up with—or shaping—consumer tastes. Until recently, Prada enjoyed high margins, a legendary creative director, and good growth opportunities. But since 2014, it has witnessed declining sales. In 2017, the company finally admitted that it had been “slow in realizing the importance of digital channels and the blogging online ‘influencers’ which are disrupting the industry.” Co-CEO Patrizio Bertelli said, “We made a mistake.”

Over the same period, under the direction of its CEO Mario Bizzarri, Gucci underwent a comprehensive transformation that made the company more relevant to today’s marketplace. Gucci created a shadow board composed of millennials who, since 2015, have met regularly with the senior team. According to Mr. Bizzarri, the shadow board includes people drawn from different functions; they’re “the most talented people in the organization—many of them very young.” They talk through the issues that the executive committee is focused on, and their insights have “served as a wake-up call for the executives.” Gucci’s sales have since grown 136%—from 3,497 million euro (FY 2014) to 8,285 million euro (FY 2018)—a growth driven largely by the success of both the company’s internet and digital strategies. In the same period, Prada’s sales have dropped by 11.5%, from 3,551 million euro (FY 2014) to 3,142 million euro (FY 2018).

We researched companies that use shadow boards, trying to understand what they really contribute to the organization
and what best practices look like. We focus here on 3 companies’ experiences.

Business Model Reinvention. Facing increasing pressure from Airbnb, French AccorHotels needed a new business model. Top management asked marketing to develop a brand for millennials. However, after 2 years, marketing came up empty. Arantxa Balson, Chief Talent and Culture Officer, decided to turn the project over to a shadow board. In 2018, the Jo&Joe brand was born. Considered “an urban shelter for Millennials,” the brand communicates creativity, flexibility, and a strong sense of community. According to Ms. Balson, the shadow board succeeded in part because it focused on its members’ vision and developed their point of view “regardless of all internal and cost constraints.” The shadow board then gave birth to another innovation, the Accor Pass, a hotel subscription that provided people under 25 with a place to stay while they hunted for a permanent residence.

Process Redesign. Stora Enso, a Finnish paper and packaging company, used its shadow board (which it calls Pathfinders and Pathbuilders) to revise how the executive committee assigned work. Until this shift, work was assigned to groups that the executives considered experts and therefore best suited to the assignment. The shadow board convinced them to assign certain tasks to non-experts, arguing that an unbiased view would increase the chance of breakthroughs. One project, aimed at reducing supply-chain lead time, had stumped a supposedly expert team. The new team came up with a workable plan within 6 months. No team members came from the business unit in question, nor had they any prior supply chain experience.

Organizational Transformation. CVL Srinivas, the CEO of GroupM India, needed to implement a 3-year digital and cultural transformation. With that end in mind, he created the Youth Committee (YCO). Since its inception in 2013, the YCO has led GroupM’s Vision 3.0, making digital the centerpiece for driving future growth. Working across departments, the shadow board also led a scoping initiative focused on the digitalization of contracts. It strengthened GroupM’s ecosystem by increasing the number and improving the nature of partnerships with media owners, data providers, consultants, auditors, and start-ups. Additionally, the group noticed that there was not much cross-agency interaction. To promote meaningful conversations, the YCO developed a social media platform (Yammer) that facilitated conversations between management and lower-level employees across agencies.

Increased Visibility for Millennials. Research suggests that millennials crave more visibility and access, which shadow boards deliver. This visibility often results in significant career progression for shadow board members. At Stora Enso, a female shadow board member was a group-level financial controller when she began the program. As a result of her impressive work on a project involving one of the company’s legacy businesses (paper), she was promoted to Sales Director of the largest paper segment a few months after the program’s end. As Human Resources (HR) Director Lars Haggstrom stated, “This [promotion] would never have happened had it not been for the shadow board program.”

What Are the Best Practices for Implementing a Shadow Board?

Look Beyond the “High-Potential” Group. Many companies staff shadow boards exclusively through executive committee nominations or with already identified high potentials. Millennial participants tend to prefer a more open process. Stora Enso’s HR Director Haggstrom pushed for an open-application process—allowing anyone who fit certain criteria to apply. Doing so not only created a more diverse cohort, but also allowed the company to discover some hidden gems who would not otherwise have been on the radar. Interestingly, they tested the performance of the company’s top 40 high potentials (who were clear shoo-ins for the program) against the employees chosen via open enrollment. On abilities such as data analytic skills, sense-making, and teamwork, the open-enrollment members outperformed the high-potentials.

Make It a CEO-Sponsored Program. For the program to have maximum impact, support needs to come from the top of the organization (though most are coordinated on a procedural level by HR). For example, AccorHotels’ shadow board program succeeds because CEO Sebastian Bazin plays an active role by interviewing potential members and regularly interacting with existing members. At Stora Enso, members reported directly to the CEO on issues related to the Pathfinders and Pathbuilders work.

Keep Evaluating and Iterating. All the companies we profiled adjusted the programs as they learned what worked (and what did not). For example, Stora Enso’s leaders reviewed the program annually and, as a result, added resources to better capitalize on diversity within the shadow board and interactions between the shadow board and executive committee. And while GroupM’s YCO originated as a 12-month program, the organization extended it by 1 year to allow the YCO to maximize potential contributions.