World Energy Use to Increase 53 Percent by 2035; China and India Account for Half the Total Growth

Worldwide energy consumption grows by 53 percent between 2008 and 2035 in the Reference case, with much of the increase driven by strong economic growth in the developing nations, especially China and India. “China and India account for half of the projected increase in world energy use over the next 25 years. China alone, which only recently became the world’s top energy consumer, is projected to use 68 percent more energy than the United States by 2035,” said Acting EIA Administrator Howard Gruenspecht.

China and India lead the growth in world demand for energy in the future. The economies of China and India were among those least affected by the worldwide recession. They continue to lead world economic growth and energy demand growth in the Reference case. In 2008, China and India combined accounted for 21 percent of total world energy consumption. With strong economic growth in both countries over the projection period, their combined energy use more than doubles by 2035, when they account for 31 percent of world energy use in the IEO2011 Reference case (Figure 1). In 2035, China’s energy demand is 68 percent higher than U.S. energy demand.

Renewable energy is projected to be the fastest growing source of primary energy over the next 25 years, but fossil fuels remain the dominant source of energy. Renewable energy consumption increases by 2.8 percent per year, and the renewable share of total energy use increases from 10 percent in 2008 to 15 percent in 2035 in the Reference case. Fossil fuels, however, continue to supply much of the energy used worldwide throughout the projection, and they still account for 78 percent of world energy use in 2035. While the Reference case projections reflect current laws and policies as of the start of 2011, past experience suggests that renewable energy deployment is often significantly affected by policy changes.

Natural gas has the fastest growth rate among the fossil fuels over the 2008 to 2035 projection period. World natural gas consumption increases 1.6 percent per year, from 111 trillion cubic feet in 2008 to 169 trillion cubic feet in 2035. Unconventional natural gas (tight gas, shale gas, and coalbed methane) supplies increase substantially in the IEO2011 Reference case—especially from the United States, but also from Canada and China.

Other report highlights include: 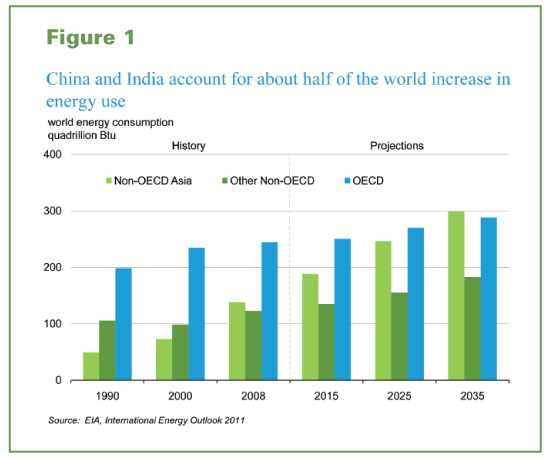 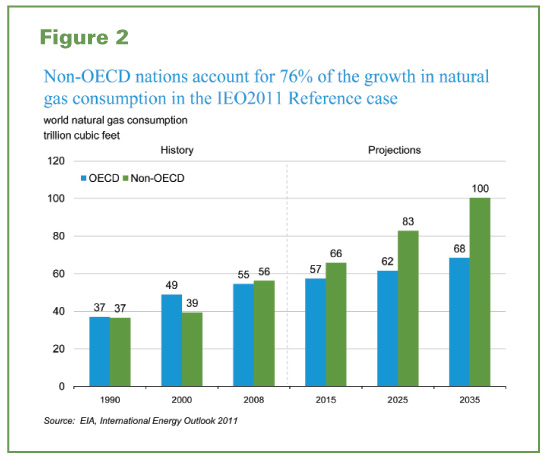