Condensation Control: Why the Proper Insulation Choices Will Keep You Out of the Rain

Tom MacKinnon is the Eastern Market Development Manager for Armacell (www.armacell.us) and works closely with engineers, owners, and specifiers, answering their insulation questions and helping them to feel more confident in their insulation selections for all of their project needs. He can be reached at Thomas.J.MacKinnon@armacell.com.

Where Is this Water Coming From?

All air on earth contains at least a little bit of moisture in the form of water vapor because of the earth’s atmosphere and climate.1 This means that water vapor is always going to be present in the air around your systems and will condense into a liquid with the right conditions. 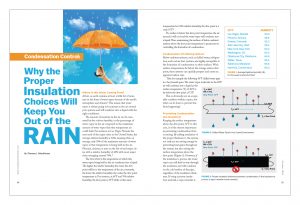 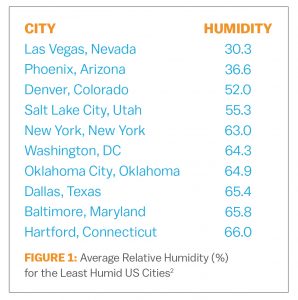 If a surface is below this dew point temperature, the air around it will cool and the water vapor will condense into a liquid. Thus, maintaining the surfaces of below-ambient systems above the dew point temperature is paramount to controlling the formation of condensation.

Below-ambient systems, such as chilled water, refrigeration, and cool air duct systems, are highly susceptible to the formation of condensation on their surfaces. With surface temperatures far below the average indoor dew point, these systems can quickly perspire and create an apparent indoor rain. 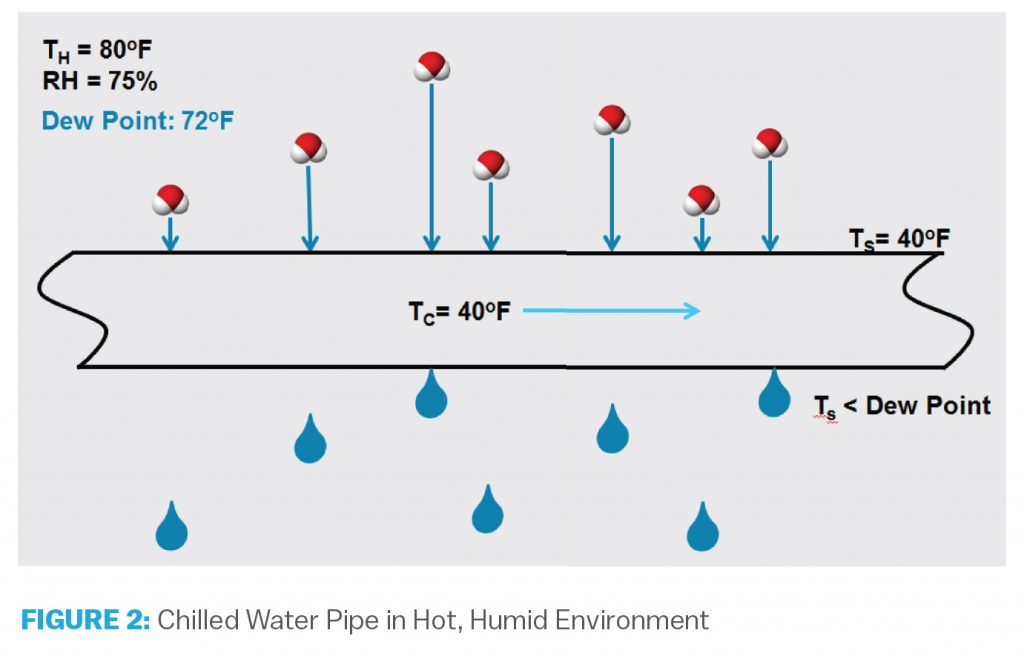 Take for example the following 40°F chilled water pipe in a hot, humid space. The water vapor molecules in the 80°F air will condense into a liquid as the surface temperature (Ts) of 40°F is far below the dew point of 72°F.

This is obviously not an acceptable condition within a space, but what can be done to prevent this from happening?

Keeping the surface temperature above the dew point, 72°F in this case, is of the utmost importance in preventing condensation from occurring. By adding insulation of the proper thickness to the system, not only are you saving energy by preventing heat gains throughout the system, but also raising the surface temperature above the dew point (Figure 3). However, if the insulation is porous, the water vapor can still find its way through the insulation and will condense on the cold surface of the pipe, regardless of the insulation thickness. If using a porous insulation material, a vapor retarder is absolutely necessary to prevent the water vapor from passing through the insulation and condensing.

These principles also hold true for duct systems. As air-conditioning systems not only cool the space but also remove humidity, condensation control is also important with duct systems. The correct insulation thickness, with vapor retarder if necessary, will prevent condensation formation on the duct surfaces, just like the below-ambient piping systems. 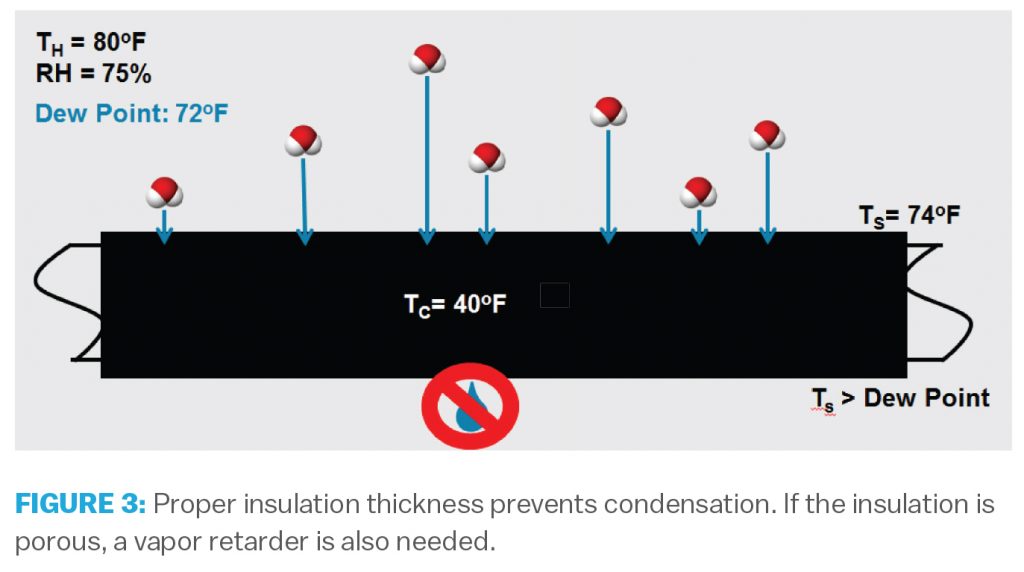 Why Is Condensation Forming, Even with Insulation?

Even after a system is insulated, condensation may still form as a result of a miscalculation or poor installation. If the engineer does not take the extreme humidity conditions of the space into account or the system functions outside the normal design parameters, the insulation thickness will not be enough to make up for the increase in water vapor in the air and condensation will form as the surface temperature falls below the Dew Point. The insulation must also be installed correctly; any gap in insulation or any small opening in the vapor retarder will lead to condensation and must be sealed immediately.

In order to control condensation within a below-ambient system, an insulation material with low water vapor permeability must be chosen to prevent water vapor from passing through the material and condensing on the system. The proper thickness must be determined from the worst case conditions in the space and can be confirmed with industry or manufacturers’ calculation tools. With the right thickness and low water vapor permeability, your system will be protected from the effects of condensation.

The Problem with Condensation

Condensation in a mechanical system does not just bring the nuisance of dripping water; it can also lead to devastating effects to the insulation or system itself. Moisture ingress is the absorption of water in a porous material that leads to an increase in thermal conductivity and the deterioration of the insulation system. Corrosion Under Insulation (CUI) can form when water gets trapped between the system and the insulation, heavily corroding the metal underneath. With the presence of water and a food source, mold is apt to follow any condensation that forms in the system.

Porous insulation materials rely on a vapor retarder to protect from water vapor accumulation. Unfortunately, these vapor retarders are not completely impenetrable and often get nicked or torn open through the regular maintenance process or are not completely sealed during installation due to difficult configurations or space constraints. With any gap in the vapor retarder, water vapor will start accumulating between the voids like a sponge soaking up water, with every 1% increase in moisture content translating to a 7.5% loss in thermal value. After all the voids are filled, condensate will start to accumulate on the exterior surface of the insulation and the system itself, forming a thermal bridge with a thermal conductivity of water (4.1 Btu/(hr. °F. ft2/in) at 75°F mean temperature). This thermal bridge causes large heat gains within the below-ambient system as the insulation switches to a conductor of heat and the efficiencies of your system will drop precipitously. This water being held in close proximity of the system can also lead to other issues, affecting the material you were trying to protect in the first place.

One issue that can result from moisture ingress is corrosion under insulation (CUI), or the formation of corrosion on the system surface when water is trapped between the surface of the system and the insulation. While CUI can form because of a system failure (leaks) or improper weather protection, it can also occur when condensation finds its way to the surface of the pipe through a break in the vapor barrier. Moisture ingress in porous materials can lead to CUI, as the insulation holds onto the water right next to the system itself, wrapping the metal with a wet covering and providing the means to form corrosion. However, CUI can also form if the water vapor finds a gap in the vapor barrier and proceeds to condense under the insulation. Any system that is subjected to corrosion will not operate as expected as the metal starts degrading and the maintenance cost of replacing the damaged system will be quite high. Left alone long enough, this corrosion may lead to a complete failure of the system, a far more catastrophic failure.

Mold is various types of fungi that can grow on almost any surface that stays between 32°F and 120°F (optimally between 70°F and 90°F) with no air flow that is damp with moisture.4 If condensation forms within the insulation and the insulation stays damp, it creates the perfect environment for this mold growth to begin, often without any trace on the outside of the insulation. This mold can then propagate throughout the insulation and start to form on the surface, where it can travel throughout the air space and lead to allergies, rashes, asthma attacks, and overall poor air quality within the space.

Conclusion: Do It Right the First Time

With below-ambient systems, condensation formation is always a risk. If the system is not insulated correctly, moisture ingress, CUI, and mold will soon follow the first drop of condensation. Not only will the insulation have to be replaced if the condensation formation is not identified in time, but the system piping, ductwork, or other components themselves—along with any surrounding equipment that the condensation was dripping on—will have to be replaced as well. It is important to make sure the system is insulated with the right thickness of insulation so that the surface temperature is always above the dew point and to use complete vapor barrier to avoid these condensation risks.

This article was published in the October 2018 issue of Insulation Outlook magazine. Copyright © 2018 National Insulation Association. All rights reserved. The contents of this website and Insulation Outlook magazine may not be reproduced in any means, in whole or in part, without the prior written permission of the publisher and NIA. Any unauthorized duplication is strictly prohibited and would violate NIA’s copyright and may violate other copyright agreements that NIA has with authors and partners. Contact publisher@insulation.org to reprint or reproduce this content.

The city of Bridgeton, Missouri, recently completed construction on a new 56,000 square foot recreation center featuring an enhanced indoor pool, larger fitness center, dance center, indoor walking track, on-site child care, gymnasium, meeting rooms, and other features. Members of the Bridgeton Community Center have access to this new facility and the various classes and activities it offers throughout the year.

Corrosion under insulation (CUI) of steel operating equipment and piping is a significant issue in the ammonia refrigeration, chilled water, chemical, and petroleum industries. A systems approach to CUI includes the correct material selection and design of the jacketing, insulation, and coating. This approach will help prevent CUI, but many corrosion engineers would agree that